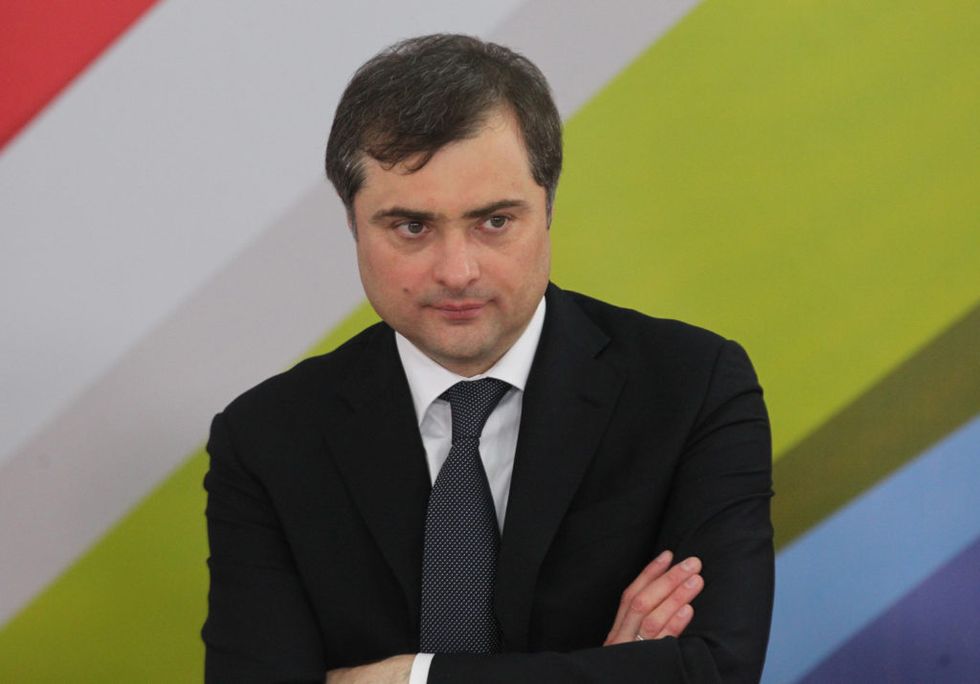 MOSCOW, RUSSIA - MARCH 21: Russian Deputy Prime Minister Vladislav Surkov attends a state commission on innovations and modernisation session at a biotechnology laboratory in the Generium Science Center , Vladimir region, on March, 21, 2012 in Volginsky, Russia. Medvedev is on a one day trip to the region. (Photo by Sasha Mordovets/Getty Images)

Though some have been slow to acknowledge it, Russian operatives hacked voter rolls and political campaign correspondence in addition to using targeted digital propaganda and fake news in an effort to influence the outcome of the 2016 Presidential election.

Now, Vladislav Surkov—a key advisor to Russian President Vladimir Putin—has bragged in an op-ed about the viability of Russia's Democratic model, while decrying the "illusion of choice" presented by American democracy.

Surkov pointed out the vulnerability of Americans to Russian influence, insisting that it goes deeper than bots and hacks:

"Foreign politicians ascribe to Russian interference in elections and referendums across the globe. In fact, the matter is even more serious - Russia interferes in their brains, and they do not know what to do with their own altered consciousness."

He also touts Russia's use of social media and the internet to exploit the vulnerabilities of Western democracy:

"When at every corner, the Internet was praised as an inviolable space of unrestricted freedom where everyone supposedly can do everything and where everyone is supposedly equal, it was from Russia that the sobering question to the fooled humanity sounded: 'And who are we in the world wide web - spiders or flies?'"

@olex_scherba And we allow them to do it by being uninformed consumers of news. No matter how many times you tell t… https://t.co/s1TpUrfWnV
— Melissa (@Melissa) 1549916903.0

@olex_scherba People have no clue how sophisticated psychological warfare is. They are using technology, the intern… https://t.co/cw6jtjl1Om
— Take a stand (@Take a stand) 1549912274.0

Many, however, disagreed with Surkov's assertion that we "don't know what to do" about it.

The question is: Are we doing what needs to be done?

@olex_scherba We know exactly what to do about it: Keep voting Dem then use our majorities to sanction Putin's crim… https://t.co/Oo29ZiPKdr
— June Casagrande (@June Casagrande) 1549911332.0

Many suggested increased sanctions, but as of now, the Trump administration has done the opposite.

In December, Trump's treasury department eased economic sanctions on companies owned by Russian businessman Oleg Deripaska. The sanctions were originally intended to punish Russia for its efforts in upsetting the United States' democracy.