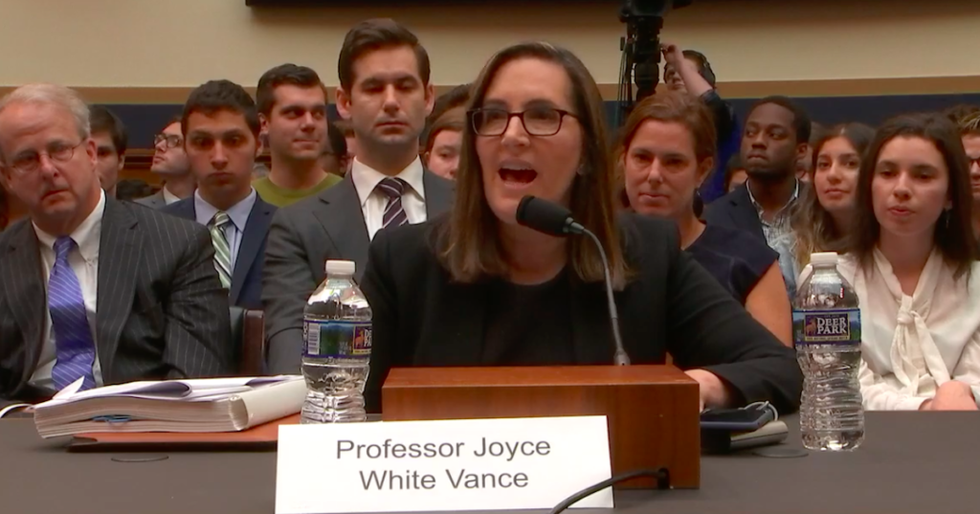 The House Judiciary Committee began hearings on the Mueller report on Monday. A list of legal experts in prosecution were called to testify including Former U.S. Attorney Joyce White Vance who now works as a law professor at the university of Alabama.

In her opening statement, Vance made it clear that in her legal opinion the only reason President Donald Trump had not been indicted for obstruction of justice was his status as the sitting President.

"Based on my experience, of more than 25 years as a federal prosecutor, I support the conclusion that more than 1,000 of my former colleagues came to, and that I co-signed in a public statement last month, saying that if anyone other than a President of the United States committed this conduct, he would be under indictment today for multiple acts of obstruction of justice."

Vance added she would try the case based on the preponderance of evidence contained in the Mueller Report were she the prosecutor reviewing the case.

.@JoyceWhiteVance complete opening statement: "If anyone other than a president of the United States committed this… https://t.co/px0UxGAyQz
— CSPAN (@CSPAN) 1560193830.0

Joyce Vance is speaking now. Said she will cut to the chance. Prosecutors will only recommend indictment on obstruc… https://t.co/ZL9SnXLax2
— Jennifer Taub (@Jennifer Taub) 1560191965.0

THIS @JoyceWhiteVance: "The facts contained in that report would be sufficient to . . .charge multiple counts of ob… https://t.co/xclTfJogTq
— Jennifer Taub (@Jennifer Taub) 1560192042.0

@JoyceWhiteVance Now Vance is presenting the details. EVERYONE should go back and watch her statement. It is clear and powerful. 17/
— Jennifer Taub (@Jennifer Taub) 1560192122.0

Some asked if the President was watching.

Joyce White Vance served as the United States Attorney for the Northern District of Alabama from 2009 to 2017. She was nominated to the position by President Barack Obama.

Vance first joined the US Attorney's office in Alabama in 1991. She spent 10 years in the criminal division before moving to the appellate division in 2002.