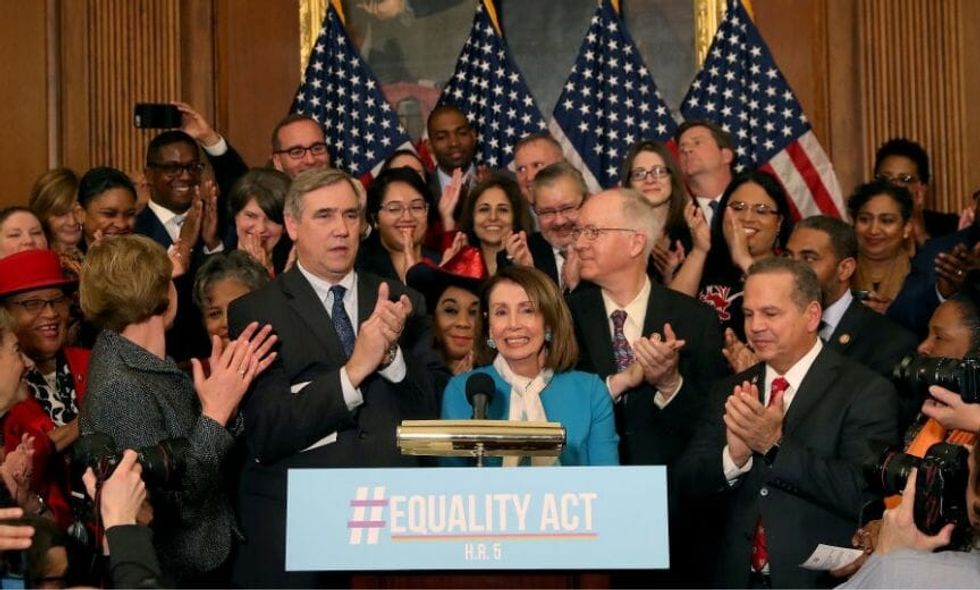 The Equality Act, also known as H.R. 5, passed 236-173 with eight Republicans breaking with their party to vote 'yes.'

"Today is a historic, monumental day in Congress," House Judiciary Chairman Jerry Nadler (D-NY) tweeted after the vote. "For the first time, we have passed comprehensive legislation that would extend federal civil rights protections to the LGBT community."

House Speaker Nancy Pelosi (D-CA) also lauded the bill, saying in a floor speech: "No one should lose their job because of who they are or who they love."

It may come as no surprise, then, that many on the right vehemently oppose the legislation - and their excuses are really something.

Senator Mike Lee (R-UT) called the law "counterproductive" because "Americans are becoming more tolerant every day." H.R. 5 "unnecessarily pits communities against each other and divides our nation when patience and understanding are so sorely needed," Lee wrote on Twitter.

@SenMikeLee Always trust someone who supports Trump and is bosom buddies w Ted Cruz to dicksplain being “tolerant” to you...
— Cliff Schecter (@Cliff Schecter) 1558113306.0

Other conservatives said that the law undermines religious liberty and women's freedom (nevermind the abortion bans Republicans are enacting across the country).

“That’s my problem — not the intent,” said Representative Doug Collins (R-GA). “It’s about how you go about it.”

“It would allow the government to force its rigid and unyielding fist inside the church,” said Florida Republican Congressman Ross Spano, who worries that the proposed law would prohibit business owners from being able to discriminate against LGBTQ individuals. "It would deliver a crushing blow to the base of the tree of religious liberty.”

The Equality Act's protections for gender identity have some Republicans claiming that children would be able to have sex reassignment surgery whenever they want and that men would dress up as women just... because.

“A vote for this bill is a vote against women,” said Representative Vicky Hartzler (R-MO).

H.R. 5 faces a steep uphill climb if it hopes to become the law of the land. President Donald Trump reportedly opposes the bill.

“The Trump administration absolutely opposes discrimination of any kind and supports the equal treatment of all," a senior administration official said in an email to The Washington Blade on Monday. "However, this bill in its current form is filled with poison pills that threaten to undermine parental and conscience rights."

This is a total 180 from Trump's stance when he ran for president in 2000 - back then, he supported federal civil rights protections for LGBTQ people.

“I like the idea of amending the 1964 Civil Rights Act to include a ban of discrimination based on sexual orientation,” Trump said in an interview with The Advocate. “It would be simple. It would be straightforward. We don’t need to rewrite the laws currently on the books, although I do think we need to address hate-crimes legislation. But amending the Civil Rights Act would grant the same protection to gay people that we give to other Americans — it’s only fair.”

"Everyone deserves to be treated with dignity and respect under the law—regardless of who they are or who they love," he said. "Now is not the time to back down. We must stand up to this Administration's intolerance and ensure America lives up to our founding ideals."

Everyone deserves to be treated with dignity and respect under the law—regardless of who they are or who they love.… https://t.co/wZtv0av3x5
— Joe Biden (@Joe Biden) 1557875700.0

The GOP-controlled Senate is almost certain to never let it see the light of day.

“At the moment,” a spokesperson for Senate Majority Leader Mitch McConnell told BuzzFeed News on Thursday, “I have no scheduling announcements regarding Senate action.”

Despite Republican intransigence, the Equality Act has enormous support nationwide. Polling conducted after the bill was first introduced in 2015 found that 70 percent of Americans favor legislation similar or identical to H.R. 5.

"More than 200 major corporations, 500 statewide and local organizations, a bipartisan consensus in Congress, and 70% of Americans support legislation protecting LGBTQ people from discrimination. I am proud to stand with them and the other @HRC to support the #EqualityAct."

"The Equality Act just passed the House, sending a clear message that discrimination against LGBTQ* people won’t be tolerated," Senator Kamala Harris (D-CA) tweeted. "No one should ever be denied work, service, or a place to live because of who they are or who they love. I urge the GOP to bring it to the Senate floor."

"Thanks to the work of thousands of activists, organizers, and voters, the Equality Act has in passed the House. This is a historic moment for equal rights in America. Now the bill goes to the Senate, and the time to call your Senator is now: (202) 224-3121"

Thanks to the work of thousands of activists, organizers, and voters, the Equality Act has in passed the House. Thi… https://t.co/1PDRxNW7cd
— Pete Buttigieg (@Pete Buttigieg) 1558117236.0

Senator Elizabeth Warren (D-MA) tweeted that even though "the fight for full LGBTQ+ equality is far from over, she is "glad to see the House passed the Equality Act today to ban discrimination, protect transgender rights, and resist the Trump administration’s efforts to roll back our progress."

The fight for full LGBTQ+ equality is far from over. But I’m glad to see the House passed the Equality Act today to… https://t.co/3ZqCzxkTOM
— Elizabeth Warren (@Elizabeth Warren) 1558112340.0

"LGBTQ Americans are still at risk of being fired, evicted and denied services. In the year 2019, that is totally unacceptable," he said. "I am proud to see the House pass the #EqualityAct so that every LGBTQ person in America is protected from discrimination. This is a historic day."

This is a historic milestone for freedom and equality in our country. Now it’s time for the Senate to stand on th… https://t.co/wD4cRTjOqU
— Michael Bennet (@Michael Bennet) 1558115841.0

Voices on the left rang loudly.

As the proud grandmother of a young transgender man, I will not stop fighting until he is granted equal recognition… https://t.co/ZNhHS3BgXs
— Jan Schakowsky (@Jan Schakowsky) 1558109803.0

Today the House of Representatives affirmed that no one should be discriminated against based on who we are or who… https://t.co/jgctadPYUB
— Ted Lieu (@Ted Lieu) 1558110605.0

LOVE DOES NOT DISCRIMINATE. Neither should the law. We are all God’s children, regardless of sexual orientation… https://t.co/31e8FhM6WT
— Hakeem Jeffries (@Hakeem Jeffries) 1558102795.0