A Washington, D.C. Methodist Church Is Using Its Church Sign to Savagely Troll the Trump Administration for the Use of Tear Gas at the Border 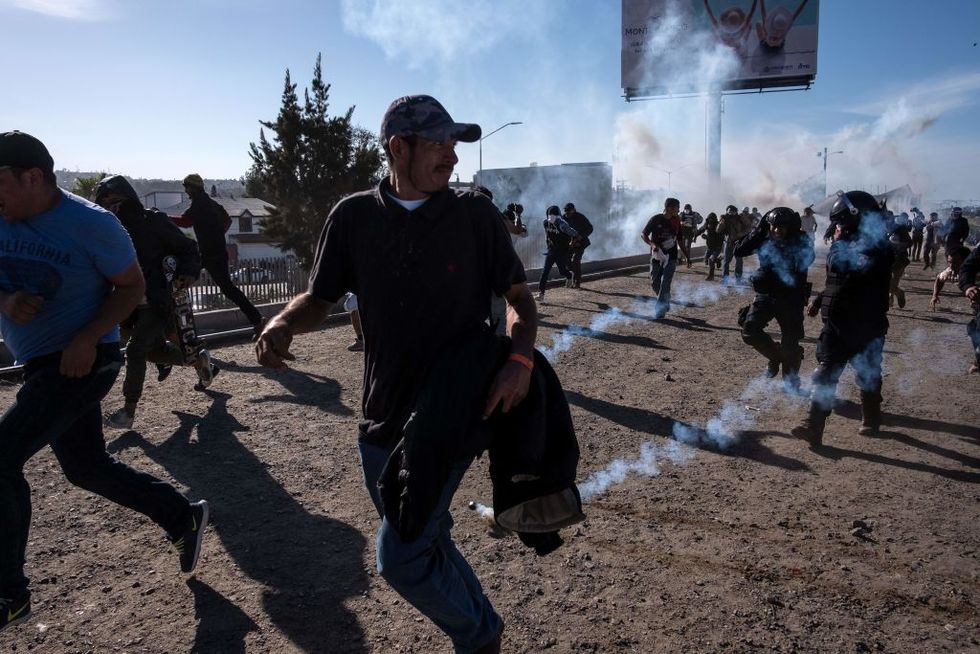 TOPSHOT - Central American migrants -mostly Hondurans- run along the Tijuana River near the El Chaparral border crossing in Tijuana, Baja California State, Mexico, near US-Mexico border, after the US border patrol threw tear gas from the distance to disperse them after an alleged verbal dispute, on November 25, 2018. - US officials closed the San Ysidro crossing point in southern California on Sunday after hundreds of migrants, part of the "caravan" condemned by President Donald Trump, tried to breach a fence from Tijuana, authorities announced. (Photo by GUILLERMO ARIAS/AFP/Getty Images)

The world was shocked when border patrol agents - on orders from the Trump administration - launched tear gas at asylum seekers attempting to cross the border. Pictures showed the immigrants - many of whom were children - covering their eyes and running away from the gas.

Now, the United Methodist Church Building in Washington, D.C. is joining the chorus of voices against violence toward asylum seekers.

The United Methodist Building in Washington, DC. “I was a stranger and you tear gassed me...Wait a second.” Proud t… https://t.co/OsTuJIGtk8
— Michele Shields (@Michele Shields) 1543596825.0

The UMC Building is located next to the Supreme Court building and only a short walk from the Capitol, so it's likely that many lawmakers will see the sign.

Some called on Evangelical Christians - many of whom support Trump - to follow the church's message.

This isn't the first sign the UMC building has brandished to criticize the actions at the border.

When news broke this summer that the Trump administration was separating children from their families, UMC spoke out as well.

It resulted in the same effect.

The separation of families and the tear gassing of asylum seekers has horrified Americans across the nation, though the Trump administration continues to defend it, citing the Obama administration's use of the gas. In the last three years of Obama's presidency, the uses of gas dropped substantially before rising again the year of Donald Trump's election.

Matthew 25:35 has often been invoked to call for humanity toward asylum seekers.

@realDonaldTrump @senmajldr @marcorubio There are no words for how abhorrent it is to gas asylum seekers. Matthe… https://t.co/JzAxsq1uQg
— Karen Weber (@Karen Weber) 1543284229.0

While the current administration may defend the tear gassing of children, at least UMC is standing firm with the United Methodist motto: Open minds, open hearts, open doors.

Hopefully the lawmakers who pass the sign each day will grow to feel the same.