The UK Just Stuck It to Trump Hard 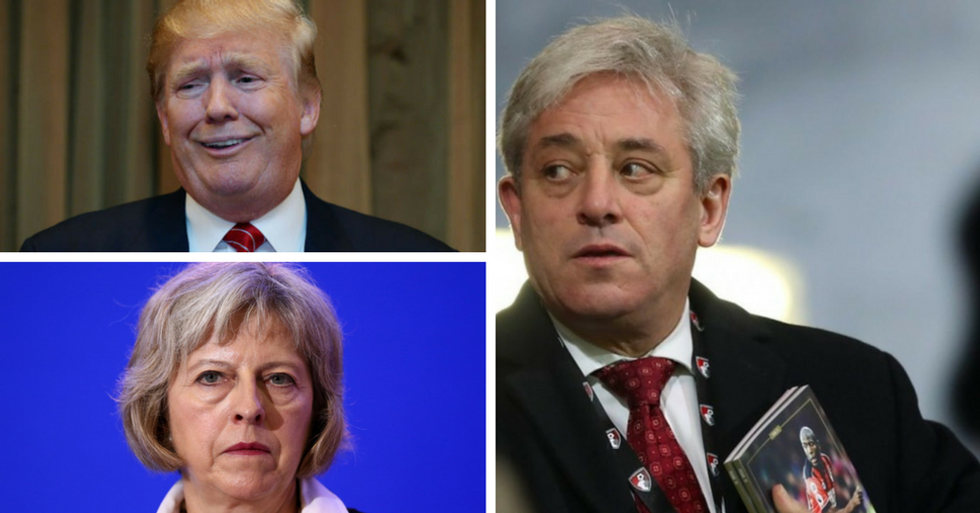 Just days after President Donald Trump's inauguration, British Prime Minister Theresa May invited him to make a state visit to Britain. But President Donald Trump will not be welcome to address Parliament on his state visit to the United Kingdom, says John Bercow, the Speaker of the House of Commons. Bercow said he was "strongly opposed" to Trump speaking in the Commons, citing the American president's recent executive order barring citizens from seven Muslim-majority nations from traveling to the United States.

"I would not wish to issue an invitation to President Trump to speak in the Royal Gallery," Bercow said during a session of Parliament, adding that the body's "opposition to racism and to sexism and our support for equality before the law and an independent judiciary" also weighed into the decision.

For foreign leaders, speaking before Parliament is a great honor and only three US presidents have addressed the body over the last few decades. President Ronald Reagan did so in 1982, for example, as did President Bill Clinton in 1995 and President Barack Obama in 2011. But, Bercow noted, “An address by a foreign leader to both houses of Parliament is not an automatic right; it is an earned honor... there are many precedents for state visits to take place in our country that do not include an address to both houses of Parliament.”

The controversy over the planned state visit is certain to embarrass both British and American lawmakers. Prime Minister May has insisted that the invitation to Trump still stands; the invitation is widely viewed as a calculated move to strike a quick trade deal before Britain makes its formal exit from the European Union. Nevertheless, a petition calling for the invitation to be rescinded has garnered 1.8 million signatures. The petition is set to be debated in Parliament later this month. Thousands of demonstrators took to London's streets to protest Trump's executive order, which sparked spontaneous protests across American airports as protesters sought to prevent the detention and deportation of a number of persons. UK demonstrators gathered outside the prime minister's residence at 10 Downing Street to declare, "Shame on May!"

Bercow's intervention came as a surprise because the role of Speaker is traditionally a politically neutral one. Bercow was previously a conservative MP before his election, and he later gave up party affiliation. But Bercow's announcement earned him some criticism, most notably from Trump ally Nigel Farage, the former leader of the UK Independence Party who spearheaded the successful "Leave" campaign.

For Speaker Bercow to uphold our finest parliamentary traditions, he should be neutral. https://t.co/Nt0LIZFbKf
— Nigel Farage (@Nigel Farage) 1486401089.0