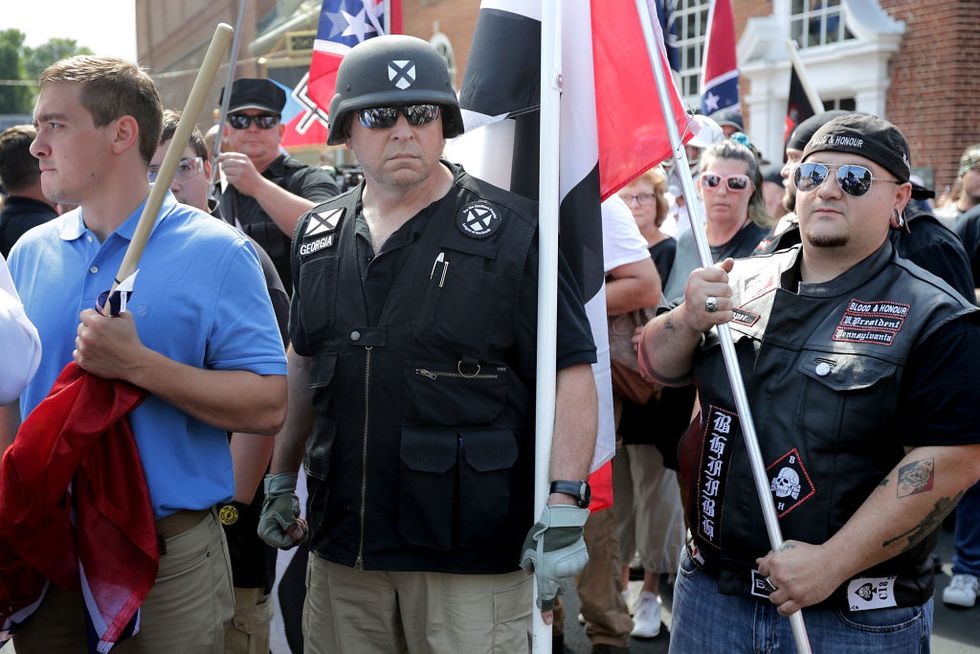 CHARLOTTESVILLE, VA - AUGUST 12: Hundreds of white nationalists, neo-Nazis and members of the "alt-right" march down East Market Street toward Emancipation Park during the "Unite the Right" rally August 12, 2017 in Charlottesville, Virginia. After clashes with anti-fascist protesters and police the rally was declared an unlawful gathering and people were forced out of Emancipation Park, where a statue of Confederate General Robert E. Lee is slated to be removed. (Photo by Chip Somodevilla/Getty Images)

Uber made an important assurance to its drivers in the DC area as the white supremacist rally known as 'Unite the Right' prepares to descend on the nation's capital this weekend.

The company reiterated its current community guidelines, which allow drivers to refuse passengers whose ideologies or apparel make them feel unsafe.

Uber has a zero tolerance policy towards discrimination of any kind. This means you will lose access to your account if you are found to have discriminated against drivers or other riders based on their race, color, religion, national origin, disability, sexual orientation, sex, marital status, gender identity, age or any other characteristic protected under applicable law.

In some cases, the riders could be banned all together for "using verbal threats, and making comments or gestures that are aggressive, sexual, discriminatory, or disrespectful."

The reiteration of drivers' rights to refuse passengers is important. Many white supremacists and neo-Nazis lament that those opposing them are hypocrites who claim to be tolerant, yet refuse to hear their opinions. However, because "opinions" like white supremacist and neo-Nazi ideologies hinge on the disenfranchisement and genocide of swathes of people, it's logical to conclude that their opinions are dangerous and inciting.

It's for this reason that many Americans on social media are mincing no words when it comes to racists marching proudly in the streets.

@thehill As they should. This is about to be the largest Nazis rally since World War 2. Shits gonna be so dangerous… https://t.co/IOfHznmfph
— DameSweetyIsSavage (@DameSweetyIsSavage) 1533848841.0

It’s making me uncomfortable seeing POC being begged to stay in their homes this weekend during the “Unite the Righ… https://t.co/9BdsGVfLvS
— دمي (@دمي) 1533833516.0

If you are attending or supporting the Unite The Right Rally in DC, I assure you that I have zero interest in assoc… https://t.co/5lxNdZg2if
— Paul Brown (@Paul Brown) 1533815582.0

Infamously, Unite the Right has proven itself to champion violence and intimidation of those who don't adhere to its genetic standards.

The rally in Charlottesville in August of last year saw Nazis proudly displaying swastikas and carrying assault rifles in the streets. The demonstration resulted in the murder of Heather Heyer when neo-Nazi James Alex Fields drove his vehicle through a crowd of counter-protestors. Chris Cantwell, one of Unite the Right's biggest supporters, carried multiple weapons to the rally and bragged about its supporters' propensity for violence.

Cantwell said in an interview with VICE:

We’re not nonviolent. We’ll f***ing kill these people if we have to.

Cantwell also said Heyer's murder was "more than justified." When asked what he believes is in store for the next Unite the Right rally, Cantwell said:

While Cantwell relished that prospect, Americans across social media fear it.

To anyone that’s planning on going down to the ridiculous KKK rally this weekend in DC. I understand you’re anxious… https://t.co/4DPuH4B8QZ
— TeeBaby (@TeeBaby) 1533741378.0

I need Howard students to be really careful in the upcoming weeks, there is going to be more openly white supremacists walking about dc
— Maya 🥰 (@Maya 🥰) 1533352955.0

The fact that Nazis are proudly toting their medicore, toxic white bullshit with no consequence or fear but people… https://t.co/ZiyfQflxHl
— Brittany Boston (@Brittany Boston) 1533842196.0

In the aftermath of Charlottesville, many still demonized the anti-fascist, or "antifa" protestors for meeting violent ideologies and aggression with defensive violence. President Donald Trump repeatedly tried to equate counter-protestors with white supremacists, saying not all of the supporters were neo-Nazis and that

The boiling point reached in Charlottesville, to many, characterized the upheaval of a nation that for too long has dismissed its long history of racism and subsequent inaction. Let's hope the rally on Sunday will not reach similar levels of unrest.