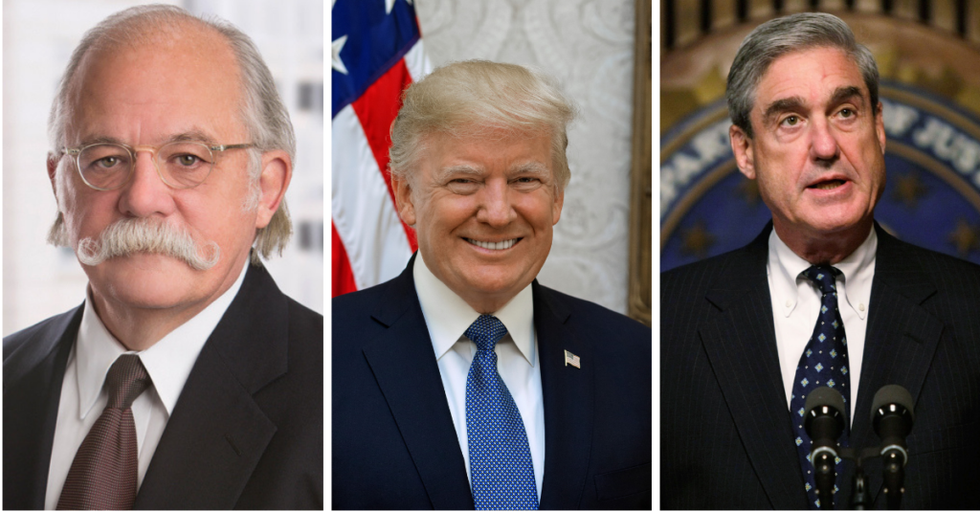 Ty Cobb, who once represented the White House as special counsel Robert Mueller's investigation into Russian election interference intensified, disagrees with President Donald Trump's assertion that the probe is a "witch hunt," and referred to Mueller as "an American hero."

He later offered high praise for Mueller, saying he has "a backbone of steel":

“I think Bob Mueller's an American hero … even though he came from an, arguably, privileged background, he has a backbone of steel. He walked into a firefight in Vietnam to pull out one of his injured colleagues and was appropriately honored for that. I've known him for 30 years as a prosecutor and a friend. And I think the world of Bob Mueller. He is a very deliberate guy. But he's also a class act. And a very justice-oriented person.”

Cobb joined the White House legal team six months into Trump's term. Cobb says there was an important distinction between those who represented the president and his own client: "the presidency."

“My legal obligations were to the institution,” he said, and with that in mind, he says he can't agree with Trump's view of the investigation. Moreover, he claims to have "never had a bad interaction with Mueller or his staff.”

To many, Cobb's remarks served as a further indication that the president's claims that he is the target of a "witch hunt" are unwarranted.

Cobb also recalls that he clashed with other members of Trump's legal team when he advocated for "dignified cooperation," which led the administration to embark on a more transparent route with Mueller's investigators, sharing thousands of internal documents and making officials available for interviews. However, such cooperation only happened because Trump happened to agree with the strategy.

“I was the one that advised it. But the president did make the decision,” Cobb said.

“In my first nine-and-a-half months … I was able to prevent the president from going on the attack against Mueller,” Cobb said. “It wasn't really until Dowd sent out a critical tweet of Mueller and Rudy joined the team that the president felt unleashed.”

Dowd resigned last March from his role as the president’s lead lawyer for the special counsel investigation. Dowd had concluded that the president was ignoring his advice, according to an individual briefed on the matter who spoke to New York Times reporters at the time.

Although Dowd had approached the special counsel’s investigation with caution, his record was marred over his response to the guilty plea of Trump’s former national security adviser Michael Flynn, who became the first Trump administration official to face charges in Mueller’s investigation. Dowd apologized to the White House after he claimed to have authored a tweet suggesting that Trump knew Flynn lied to the FBI in January 2018, reviving questions as to whether the president obstructed justice when he asked James Comey, the former FBI Director, to drop the investigation into Flynn’s Russian dealings.

Cobb says Trump shifted his approach to the investigation because he became increasingly frustrated the more attention the investigation took away from other aspects of his presidency, such as his foreign policy agenda. The president's attorneys tried to persuade him that the probe would "soon be over," but Cobb believes it won't be over because "this is going to go through 2020. And if the president is reelected, it'll go beyond that.”

Additionally, Cobb's first-hand experience in the White House has given him some insight into the Trump administration's high turnover rate. Did Trump hire "the best people"? No, says Cobb:

“It would be disingenuous to suggest that the president doesn't need a better [human resources] team and that some of the people that have been chosen and [been] put in significant roles have not performed as he may have hoped -- or as voters may have hoped."

This isn't the first time Cobb has broken from his former boss either.

In October 2018, Cobb told CNN that he doesn't believe the probe is a witch hunt.

Mueller "was a very serious prosecutor,” Cobb said. “He and I first met in the mid-'80s when we were prosecuting different places, and I have respected him throughout.”