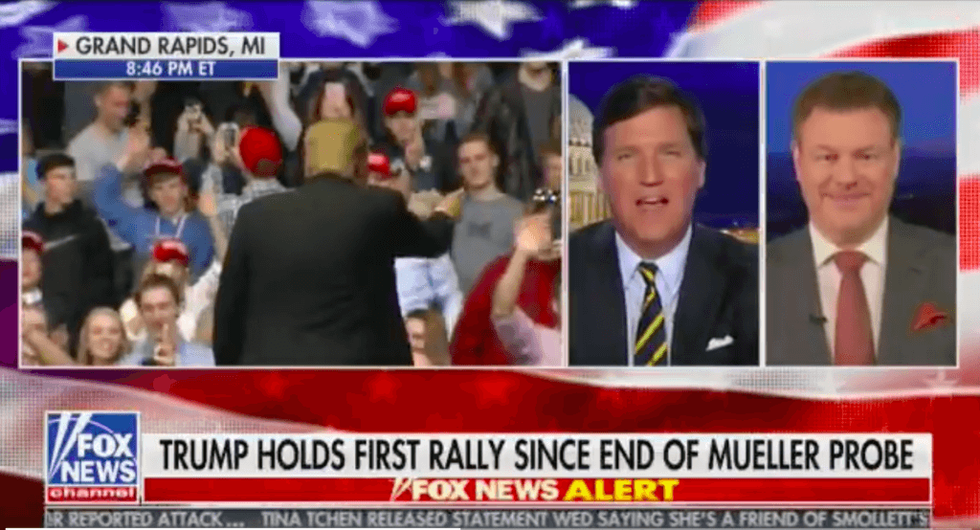 It's well known that Tucker Carlson is a big fan of President Donald Trump, but people weren't prepared for the Fox News personality's description of Trump's performance at a rally in Grand Rapids, Michigan, last night.

Trump was ever the victor in his first rally since the Mueller report was filed, according to Carlson.

"You can sort of picture him with his boot on the chest of the vanquished and a mug of mead in hand, howling at the night sky. Isn't that what that is?"

Fox News host says he is fantasizing about Trump "with his boot on the chest of the vanquished and a mug of meat in… https://t.co/kWbOfsirKh
— Madeline Peltz (@Madeline Peltz) 1553820909.0

People were as perturbed by this description as you'd expect.

@peltzmadeline Wow. That is uh, some fantasy he has going there. *Someone* is dying to replace Hannity as Trump’s bedtime phone buddy.
— 🇺🇸Verita Cassiere (@🇺🇸Verita Cassiere) 1553823697.0

Last night's rally was Trump’s first since the Mueller report was filed. The report, according to a letter penned by Attorney General William Barr last Friday, found insufficient evidence that President Trump or members of his campaign “conspired or coordinated with the Russian government in its election interference activities,” an announcement that has prompted the president to proclaim victory over his opponents although the full report and its contents have still not been released to the public.

Carlson has seized on Barr's letter since last Friday, and he used his program last night to slam Representative Adam Schiff (D-CA), the ranking Democrat on the House Intelligence Committee, as a "collusion monger."

"The Mueller report deflated the Russian collusion hoax, which has hung over the Trump administration since its first days. It's good news. The president is not a traitor," Carlson said.

"But the news is a disaster for the Democratic Party. Democrats were planning to ride that conspiracy theory to victory in the election next year. They were so certain that Trump was guilty of collusion that they installed their party's chief collusion monger, Adam Schiff of California, as the head fundraiser for the Democrats in Congress. Schiff was planning to spend the next 18 months writing direct mail pieces about espionage and the Kremlin and Don Jr. going to jail.

Robert Mueller foiled his plans. So now, Schiff is back on the House Intelligence Committee. He chairs it. It is one of the most powerful positions in the U.S. government. The Intel chairman is supposed to be  -- and has been traditionally -- among the wisest, least partisan and most honorable members of Congress.

Schiff is none of those things. He's an unbalanced hack with a weakness for conspiracy theories. There's no part of the Russia hoax, no matter how absurd, he doesn't believe and repeat wholeheartedly. The Mueller report has been tough on people like Schiff, who repeatedly said things like, 'There's plenty of evidence of collusion.' They look ridiculous now."

The president's rally came amid news that he is facing trouble in the Midwest, according to Morning Consult.

The president's approval rating has dropped 23 points in Michigan since 2016. Michigan was one of the key swing states that won him the election.