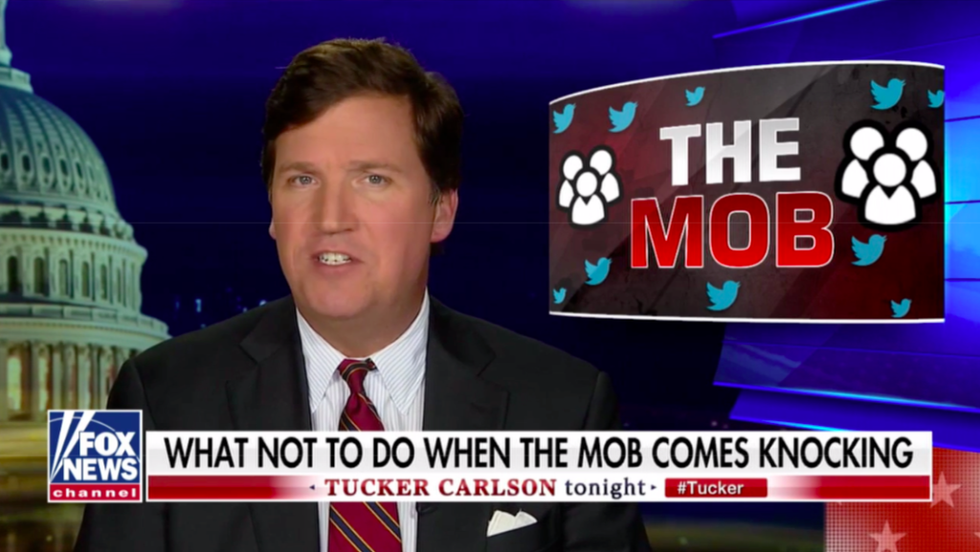 Even after a bizarre non-apology, it seems like the backlash is bound to get worse. More recordings have been released.

Like their predecessors, the tapes are from a call-in interview Carlson did for the radio show Bubba the Love Sponge in 2008.

In the newly-released tapes, Carlson makes a number of racist and Islamophobic statements, like

"Iraq is a crappy place filled with a bunch of, you know, semiliterate primitive monkeys."

In another tape, Carlson repeatedly uses the term "faggot."

Just as bafflingly as his refusal to apologize for the misogynist tapes, Carlson is also digging his heels into the ground with these latest ones. He went on a diatribe addressing the tapes on his show last night, lamenting his self-awarded victim status and railing against what he called "the American outrage machine."

After accusing the Left of prioritizing "late term abortion and crossdressing fifth graders" over free speech, accusing them of trying to kill his show for years, Carlson said:

"These are the people who write our movies and our sitcoms. These people are not shocked by naughty words, they just pretend to be when it's useful. And it's been very useful lately. The Left's main goal is to control what you think...We will never bow to the mob. Ever. No matter what."

But it turns out that many disagree with Carlson's stance that defending pedophiles and calling Iraqis "primitive monkeys" doesn't warrant an apology.

.@ChrisCuomo: Fox News host Tucker Carlson should either own his hateful words or apologize (but that takes charact… https://t.co/PSaSCxvil9
— CNN (@CNN) 1552372990.0

In addressing the tapes on his show, Carlson said something that's unfortunately true.

Fox News is on his side, not demanding an apology.

That didn't surprise anyone.

And why wouldn't Fox take up for him? His viewers seem to think the Left is ridiculous for being repulsed by his comments—and that repulsion is, inexplicably, an attack on free speech.