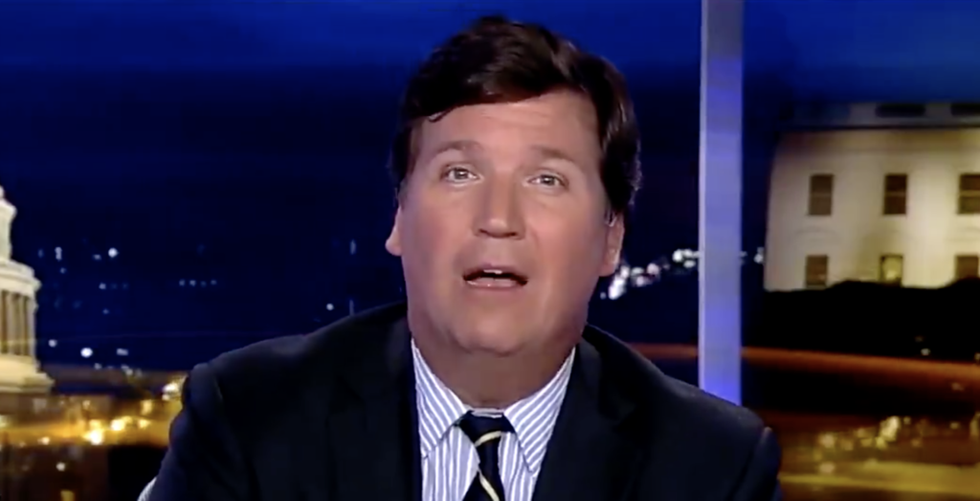 Far-right Fox News host Tucker Carlson routinely rails against legal immigration, against the so-called "socialism" of the left, and against basic respect for people whose phenotype doesn't match his—all under the guise of love for American values.

So it came as a surprise when Carlson said he was supporting Russia in its ongoing aggression towards neighboring Ukraine.

"Why do I care what's going on in the conflict between Ukraine and Russia? And I'm serious, why do I care? And why shouldn't I root for Russia, which I am."

Ukraine declared independence from the U.S.S.R. in 1991 shortly following the U.S.S.R's dissolution. In the decades following, Ukraine and its people have continued to perfect their democracy despite attempts at influence from Putin's Russia next door.

In 2014, after Ukraine sought to strengthen its ties with the European Union, Russian forces invaded Crimea—a peninsula at the southern tip of Ukraine, nearly adjacent to Russia. Because Russia's military greatly outmatched Ukraine's, the Kremlin was able to illegally annex the territory.

Thousands of Ukrainians have since died in the fight to preserve their democracy against Russian aggression as the war in Crimea continues. This is why American career foreign officials were confounded when the White House withheld crucial military aid from Ukraine with no explanation.

It's also partly why so many were disgusted with Carlson for "rooting for Russia" because the country violently seeks to quash a fledgling democracy in order to expand its empire. We also mustn't forget—whether Tucker acknowledges it or not—that Russia interfered in the 2016 presidential election in "sweeping and systematic fashion." Russia attacked us too.

At the end of the broadcast—after backlash began ensuing—Tucker claimed he was "joking" in an effort to "mock the obsession with Russia that so many on the left have." Tucker didn't address why he proclaimed "I'm serious" when announcing his support for anti-Democratic Russian forces though.

His attempts to walk back the statement were of no use.

The so-called party of Reagan is actually cool with dictators now, apparently.

Tucker Carlson is likely to paint his critics as hysterical leftists continuing the so-called "obsession" with Russia, but the damage has been done. Nearly 12 hours after his broadcast, his name is still trending on Twitter with people condemning his comments en masse.

For more information on Russia's efforts against democracy in Ukraine, the United States, and the European Union, check out The Road to Unfreedom by historian Timothy Snyder here.