Tucker Carlson Just Addressed the Leak of His Expletive-Laden Unaired Interview, and His Apology Wasn't Much of an Apology At All 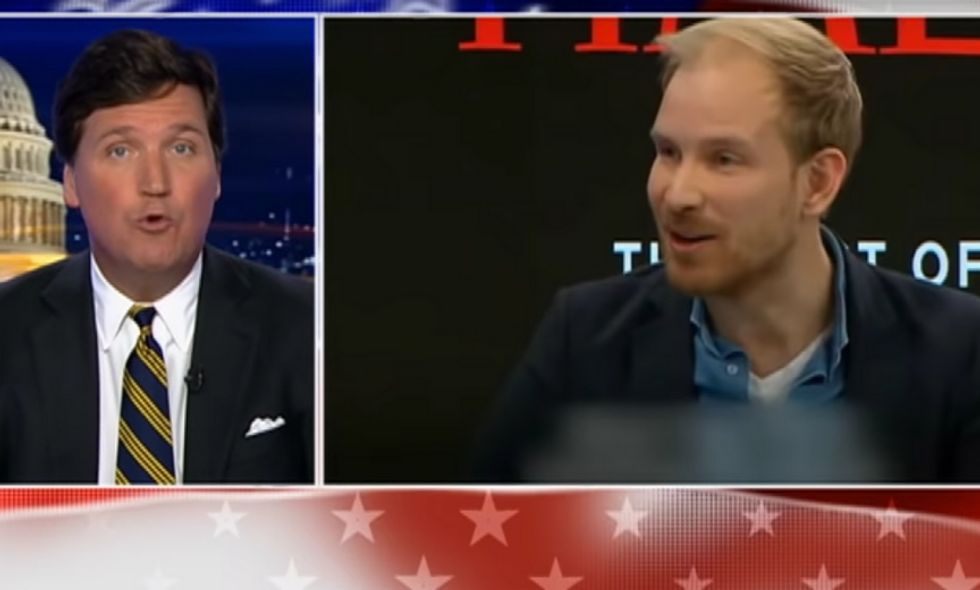 A day after historian Rutger Bregman leaked a tape of Fox News host Tucker Carlson calling him a moron in an unaired segment of Carlson's show, Carlson addressed his viewers. He assured that his profane language during the interview was a "genuinely heartfelt" response to an already impassioned discussion.

In the leaked segment, Bregman accuses Carlson of being "a millionaire funded by billionaires" to do the network's bidding. That didn't sit well with Carlson, who responded with:

“I wanna say to you why don’t you go f–k yourself, you tiny-brain—and I hope this gets picked up—cause you’re a moron. I tried to give you a hearing, but you were too f–king annoying.”

In his so-called apology, Carlson said "I did what I try never to do on this show, and I was rude. I called him a moron," Carlson said, adding:

"In my defense, I would say that was entirely accurate, but you’re not allowed to use that word on television, so once I said it out loud there was no airing the segment. There is some profanity and I apologize for that, on the other hand, it was genuinely heartfelt. I meant it with total sincerity."

Carlson's statement came after NowThisNews released footage of an unaired interview conducted after Bregman's appearance at the World Economic Forum in Davos, Switzerland.

The interview began with Carlson thanking Bregman for his criticisms of the event's wealthy attendees and their failure to address wealth inequality. Bregman responded that Fox News is guilty of the same offense:

“You are a millionaire funded by billionaires…You’re not part of the solution, Mr. Carlson, you’re part of the problem actually.”

Watch the original video below:

Watch Fox News host Tucker Carlson call one of his guests a 'tiny brain...moron' during an interview. NowThis has o… https://t.co/NAYnfItPJh
— NowThis (@NowThis) 1550685858.0

Carlson's apology wasn't much of an apology, people observed.

@TuckerCarlson these are the dumbest, conflicting, and lease believable explanations as to why you didn't air it. H… https://t.co/4xn7xfUhu3
— David Pakman (@David Pakman) 1550756382.0

@TuckerCarlson “When I threw that temper tantrum for him speaking truth to power, I meant it with genuine sincerity” -TC
— Chris (@Chris) 1550715130.0

@TuckerCarlson You could just air the unedited video and let your viewers judge. You know, something along the line… https://t.co/vlcN8weGBu
— Glen M (@Glen M) 1550762098.0

Carlson was also criticized by professional tennis player James Blake, who said Carlson couldn't handle being "made to look a fool by someone much more intelligent."

@TuckerCarlson Seems pretty obvious why. You got made to look a fool by someone much more intelligent than you and… https://t.co/1uLNGZcePl
— James Blake (@James Blake) 1550710663.0

Michael Avenatti, the attorney for adult film actress Stormy Daniels who has had his own on-air bouts with Carlson, called the host a "complete f*cking hack who talks a big game but in reality has no balls."

Hey @TuckerCarlson - this is also heartfelt: You are a complete fucking hack who talks a big game but in reality ha… https://t.co/ZobPaKmR6x
— Michael Avenatti (@Michael Avenatti) 1550721072.0

"We were disappointed in the segment and respect our audience’s time too much to consider airing it,” Wells said.

The Young Turks host Cenk Uygur also defended Carlson, saying: “Tucker did want to talk about tax avoidance and I think he was legit on that and they never really quite got to it. It clearly was a trap and he fell into it. Let’s just keep it real, that’s what happened.”