Could Trump’s Path to the GOP Nomination Be in Doubt? 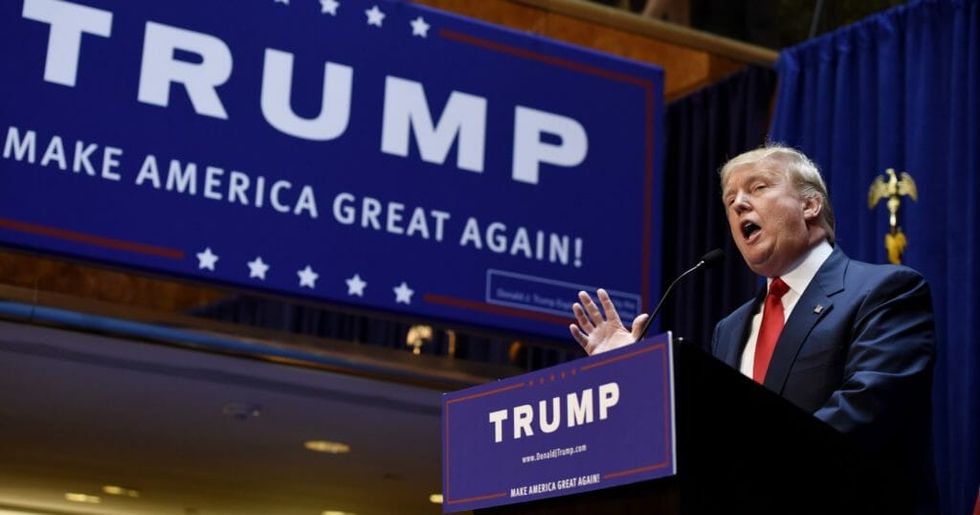 Both candidates won 18 delegates each in the March 5 contest, but Cruz has reportedly used his influence to entice more delegates into supporting him, concentrating his efforts on convention committees with the power to deny Trump the GOP nomination. Trump threatened to file a lawsuit over delegate rules in response.

Bribery of elected officials is prohibited by federal and state law. But there is very little on record about what a private citizen serving as a delegate for their party’s convention can accept in exchange for a vote on a nominating ballot.

Trump needs 1,237 delegates to become the Republican nominee, currently leading 736 to Cruz’s 463. But if Cruz wants to usurp Trump's delegate lead, swaying even a small number of delegates could be important. The ten Louisiana delegates Cruz seeks come from two places; half of them originally supported former Republican presidential candidate Marco Rubio, whom Republicans once touted as a potential foil to the seemingly unstoppable Trump, but who lacked the wins to support the proposed narrative. The other half are not pledged to a particular candidate.

litigation in a tweet. "Maybe your time is better spent reading rules than sending hate-tweets,” he said.

That the news coincides with the media’s growing disenchantment for the billionaire businessman’s campaign highlights the uncertainty of his path to the nomination.

Trump's anti-establishment credentials enabled him to weather both a political and media storm in light of his derogatory comments about Mexicans and Muslims. But his remark that women should “face some sort of punishment” for having abortions received considerable backlash from both left and right. Trump struggled to retract his statement almost immediately, saying that those who perform abortions “should be held responsible, not the woman.”

Negative coverage besieged the billionaire; Democrats cited his remarks as evidence of his "war on women.” One in four American women view Trump unfavorably, according to a recent opinion poll, a statistic which bodes well for Hillary Clinton’s chances in the general election this fall.

Trump courted more controversy after denigrating Ted Cruz’s wife, Heidi, over her looks; he later recanted, calling his comments “a mistake.” After his campaign manager, Corey Lewandowski, was charged with battery for grabbing a reporter, Trump stood behind

him in public––a move which won him no favors––though recent reports suggest Lewandowski’s role in the campaign is shrinking. Sixteen female journalists signed an open letter demanding Trump fire Lewandowski.

The controversial nature of Trump’s candidacy runs deeper. When not calling Mexicans drug dealers and rapists, he mocked John McCain’s experience as a prisoner-of-war and Fox News correspondent Megyn Kelly’s menstrual cycle. He openly mocked both New York Times reporter Serge Kovaleski’s physical disability––and even former rival Carly Fiorina’s face: “Would anyone vote for that?” he asked. “Can you imagine that, the face of our next president?” Any one of these incidents would have destroyed the chances of any other candidate.

Stephanie Cegielski, a former strategist for the Make America Great Again Super PAC, made headlines when she penned a scathing open letter announcing her defection from his campaign. “I don't think even Trump thought he would get this far,” she wrote. “And I don’t even know that he wanted to, which is perhaps the scariest prospect of all. He certainly was never prepared or equipped to go all the way to the White House, but his ego has now taken over the driver's seat, and nothing else matters. The Donald does not fail. The Donald does not have any weakness. The Donald is his own biggest enemy.”

Political journalist Lisa DePaulo admits that Trump’s disdain for political correctness made for compelling television. “The whole media, and I include myself, has been under the spell

of Trump being just so fun for so long… I’m not a TV news person, but it was sickeningly obvious that this was all about ratings,” she said. His time as a media darling, she believes, is running out.

That Trump maintained momentum for this long is no easy feat. But his meteoric rise, according to James Kirchick, a fellow at the Foreign Policy Initiative, mirrors that of L. Ron Hubbard, founder of Scientology. He notes that “both men are (or, in Hubbard’s case, were) narcissistic, autocratic, money-obsessed, pathological liars and would-be sexual conquerors who built business empires for the primary purpose of self-enrichment under glitz-drenched brands maintained by fraud and advanced by uncompromising litigiousness and occasional physical aggression against critics.”

These uncompromising stances are attractive; Trump's most passionate supporters are a coalition united around their mutual disdain for all things Washington, government and Congress. This is further exemplified in his vision for federal libel and slander laws “so when The New York Times writes a hit piece, which is a total disgrace, or when The Washington Post, which is there for other reasons, writes a hit piece, we can sue them and win money instead of having no chance of winning because they’re totally protected… We’re going to open up libel laws and we’re going to have people sue you like you’ve never got sued before.”

Trump’s campaign may reach its tipping point soon; several new polls reveal the billionaire is plummeting in popularity. This news deals a significant blow to his political aspirations with 17 states slated to vote before the end of primary season in June. As expected, Ted Cruz posed a significant threat in Wisconsin’s Republican primary, enjoying a double-digit lead over Trump statewide. Trump finished with a disappointing 35.1% of the vote, securing only 6 delegates at the congressional level.

Ted and Heidi Cruz after winning in Wisconsin. (Credit: Source)

“Normally, when you’re in a hole, the best advice is to stop digging. That doesn’t appear to be his inclination,” says GOP strategist David Carney. “It’s like taking a wagon full of

nitroglycerine across the prairie. It’s great if you get to the mountains and blow them up for gold. But it’s pretty unpredictable.”

Stephanie Cegielski opts for a less metaphorical descriptor. “He doesn't want the White House. He just wants to be able to say that he could have run the White House. He’s achieved that already and then some. If there is any question, take it from someone who was recruited to help the candidate succeed, and initially very much wanted him to do so.”

THE POLITICAL CONSEQUENCES OF VIOLENT RHETORIC

Should Trump win the nomination, he “would start the general election campaign as the least-popular candidate to represent either party in modern times,” write Philip Rucker and Robert Costa, addressing findings from a Washington Post-ABC News polling. “Three-quarters of women view him unfavorably. So do nearly two-thirds of independents, 80 percent of young adults, 85 percent of Hispanics and nearly half of Republicans and Republican-leaning independents.”

Damage control is not highly prioritized on Donald Trump’s agenda and speculation that the GOP might usher in a third party challenger should he win the nomination persists. As the backlash against Trump intensifies, criticism from high profile conservatives who once praised his insurgent campaign take center stage.

Former House speaker Newt Gingrich weighed in. “None of the mistakes have been forced and nobody forced him to react negatively,” Gingrich said. “It’s almost as though he is so

full of himself that he can’t slow down and recognize that being president of the United States is a team sport that requires a stable personality, that allows other people to help him… I think he has a real possibility of, having surged amazingly, missing the golden ring.”

“I know that I won't go to the polls,” said Glenn Beck, who recently compared Trump to Hitler. “I won't vote for Hillary Clinton and I won't vote for Donald Trump. I just won't. And I know a lot of people that feel that way.”

But Republican pundit Erick Erickson went even further, indicating Trump’s radical following alienates even the staunchest conservatives. In a scathing column titled “I Will Not Vote For Trump Ever,” he also took umbrage with his own party for cultivating a campaign bid now well out of control. “A lot of Republicans are going to start claiming that we must rally to the nominee, no matter who he is,” he wrote.

“I know for certain a large number of Trump supporters will not rally to a Cuban. I will not rally to Trump. If Trump is able to get the nomination, the Republican Party will cease to be the party in which I served as an elected official. It will not deserve my support and will not get it if it chooses to nominate a pro-abortion liberal masquerading as a conservative, who preys on nationalistic, tribal tendencies and has an army of white supremacists online as his loudest cheerleaders.”

Dan Schnur is a former communications director for the California Republican Party who is now registered as an independent. “It's impossible to conceive that Republican

leaders would simply forfeit their party to him,” he says. “Even without the formal party apparatus, they'd need to fly their flag behind an alternative, if only to keep the GOP brand somewhat viable for the future. Otherwise, it would be toxic for a long, long time.”

But Trump’s insurgency was inevitable, writes conservative commentator David Brooks. The man he calls the “cancer” of the Republican party is the consequence of groups that wish to elect outsiders with no political experience, further undermining the legitimacy of legislative decision making.

“People say that Trump is an unconventional candidate and that he represents a break from politics as usual,” he writes. “That’s not true. Trump is the culmination of the trends we have been seeing for the last 30 years: the desire for outsiders; the bashing style of rhetoric that makes conversation impossible; the decline of coherent political parties; the declining importance of policy; the tendency to fight cultural battles and identity wars through political means. Trump represents the path the founders rejected.”