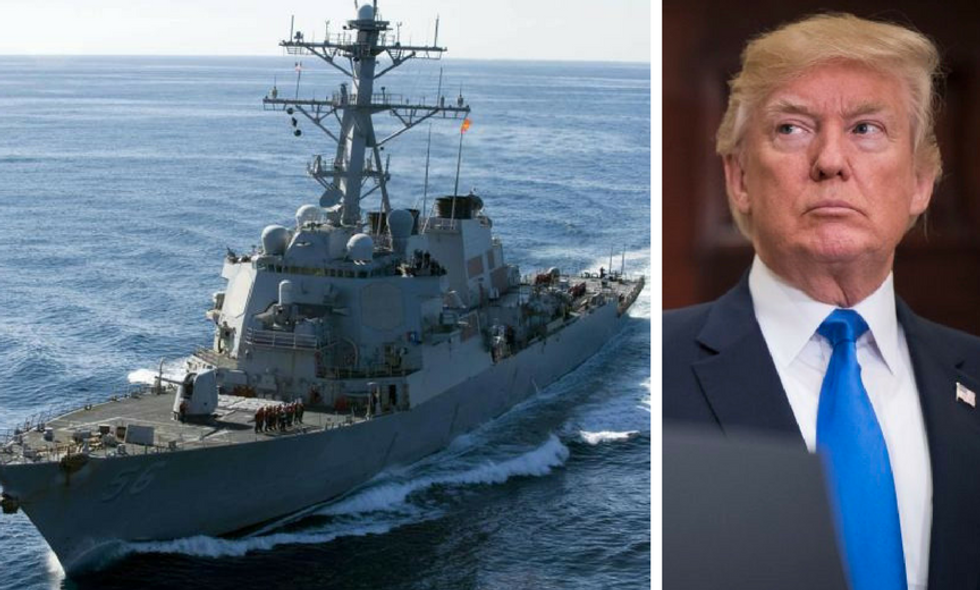 At 5:24PM ET Sunday afternoon, the USS John S. McCain, a U.S. Navy guided-missile destroyer, collided with a Liberian merchant vessel off the coast of Singapore.

According to a statement by the U.S. Navy, ten sailors on board are still missing, and search and rescue efforts are underway. Five sailors were injured in the collision, four of whom were medically evacuated to a Singapore hospital.

While the ship suffered damage to its port side, it was able to sail back to port at Changi Naval Base in Singapore on its own.

When asked about the collision on Sunday, President Trump initially had an oddly muted response, saying only:

That didn't go over well.

"That's too bad" is an insult to every American serving in the armed forces and their families. #TrumpResign https://t.co/HI4x8GwKij
— Andrea Chalupa (@Andrea Chalupa) 1503282158.0

Some saw it as a staffing failure.

Just thinking about "That's too bad" a bit more. It obviously says a lot about Trump as a person, but it's also a massive staffing failure.
— Matt Fuller (@Matt Fuller) 1503287851.0

Read more on the next page...

Late Sunday, however, President Trump took to Twitter to offer a more appropriate message from the commander in chief.

Senator John McCain, whose father and grandfather are the namesakes of the damaged destroyer, offered his family's prayers as the search and rescue mission got underway Sunday evening.

This collision comes just months after seven sailors were killed when the USS Fitzgerald crashed into a Japanese merchant ship this past June.

An investigation into Sunday's collision is underway.