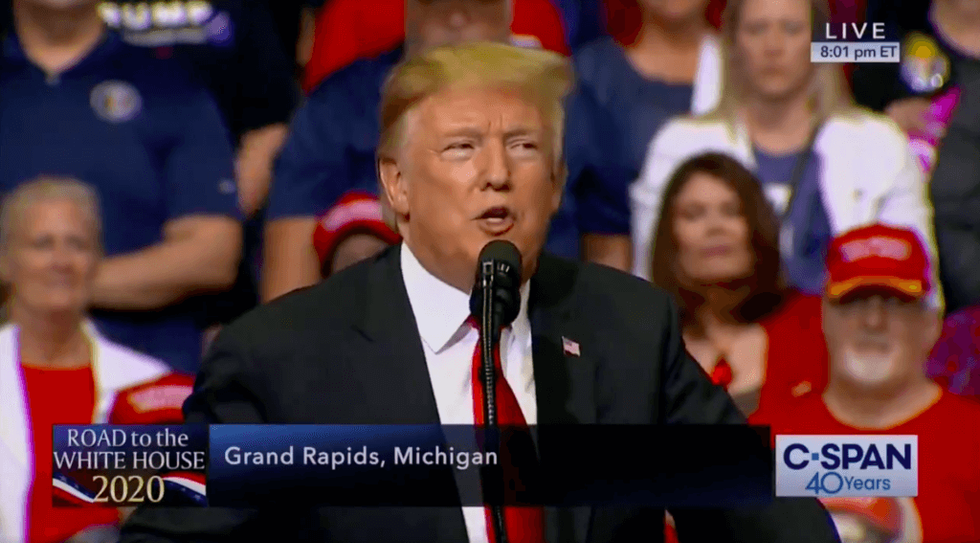 President Donald Trump claimed wind turbines are a poor source of electricity, arguing that people would have to turn off their televisions because "the wind isn’t blowing."

"If Hillary [Clinton] got in…you'd be doing wind," he told the crowd at a rally in Grand Rapids, Michigan, last night. "Windmills. Weeeee. And if it doesn't blow, you can forget about television for that night."

"'Darling, I want to watch television.' 'I'm sorry! The wind isn't blowing.'" he added, mimicking a man watching television with his partner. "I know a lot about wind."

"The truth is that a combination of wind, solar and other renewables, along with battery and smart grid technology, can provide continuous and abundant electricity," Mann said.

The president's latest demonstration of not understanding basic science received attention from many other critics who also took aim at the president for his long record of climate denial:

US: climate change is a pressing and complex challenge that requires investment in alternative energy and a commitm… https://t.co/uJk5yo6wx6
— Jake Maccoby (@Jake Maccoby) 1553882104.0

Dear @realDonaldTrump, Saw your latest comment about not being able to watch your TV when using wind power. This… https://t.co/fvB0rS5SW9
— Mike Levin (@Mike Levin) 1553178296.0

Even the Trump administration's very own Department of Energy's Office of Energy Efficiency and Renewable Energy understands how wind power works:

The website also points out what happens to the electricity supply when the wind isn't blowing:

The U.S. power grid consists of a huge number of interconnected transmission lines that connect a variety of generation sources to loads. The wind does not always blow and the sun doesn't always shine, which creates additional variability (due to the changing output of wind and solar) and uncertainty (due to the inability to perfectly forecast wind or solar output).

But power grid operators have always had to deal with variability. Other forms of power generation, including traditional thermal generation, can unexpectedly trip off-line without notice; all forms of power generation may sometimes not operate when called upon. There is also uncertainty inherent in the system due to ever-changing load (energy demand) that cannot be predicted perfectly, which power grid operators have always had to manage.

Grid operators use the interconnected power system to access other forms of generation when contingencies occur and continually turn generators on and off when needed to meet the overall grid demand.

Earlier this month, the president made headlines after he mocked the Green New Deal's renewable energy policy while addressing the annual Conservative Political Action Conference in Maryland, likening it to “a high school term paper written by a poor student.”

His claim was similar to the one he made last night:

"The Green New Deal—I encourage it. I think it's something [Democrats] should really promote…no planes, no energy. When the wind stops blowing, that's the end of your electric. 'Darling is the wind blowing today? I'd like to watch television.'"

He also repeated the claim during an appearance at an Army tank factory in Lima, Ohio.

The president further claimed without evidence that having a wind turbine near a residential area would lower property values.