Donald Trump Just Did a Total 180 on Wikileaks After Julian Assange's Arrest, and People Can't Stop Reminding Trump of What He Said in 2016 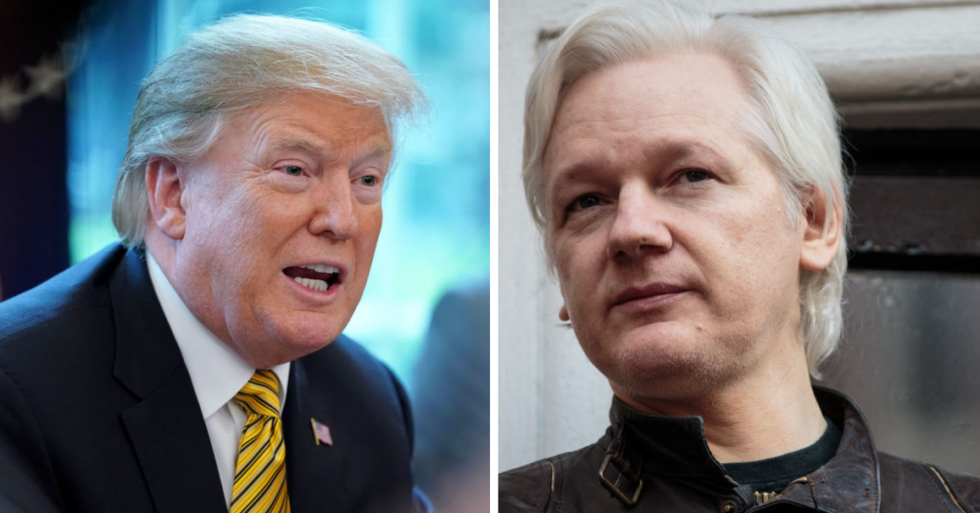 Hours after WikiLeaks founder Julian Assange was arrested at the Ecuadorian embassy in London on charges that he conspired with whistleblower Chelsea Manning to hack government computers, President Donald Trump offered a take that, naturally, contradicts his past statements.

“I know nothing about WikiLeaks. It’s not my thing," he said. "I've been seeing what's happened with Assange, and that will be a determination. I would imagine mostly by the attorney general, who is doing an excellent job. So he'll be making a determination. I know nothing really about him. That's not my deal in life. I don't really have an opinion."

The president's own statements show otherwise. The Trump Twitter archive shows that Trump mentioned WikiLeaks 141 times in the month leading up to the 2016 presidential election. And two years ago at a campaign rally in Wilkes-Barre, Pennsylvania, he actually said "WikiLeaks. I love WikiLeaks."

People (journalists particularly) haven't stopped reminding the president––who's been known to contradict himself on a daily basis––of what he once said, either.

“I know nothing about Wikileaks. It’s not my thing” Trump says just now in reference to an organization he previously said he loved.
— Sam Stein (@Sam Stein) 1555001010.0

Here are just a few of the moments during the 2016 campaign when Trump proclaimed to "love" WikiLeaks:

During the 2016 presidential campaign, Trump praised WikiLeaks for its role in disseminating material stolen from the servers of the Democratic National Committee and Clinton campaign. In July 2016, Trump went so far as to invite Russia to hack Hillary Clinton’s emails, asking the Kremlin to find “the 30,000 emails that are missing” from the personal server she used during her tenure as Secretary of State.

Trump's denials are meritless when we consider that Roger Stone,  the president's longtime former political adviser, was arrested in January as part of the special counsel investigation over his communications with WikiLeaks.

Additionally, Donald Trump Jr., the president’s oldest son, released exchanges he had with the WikiLeaks Twitter account via direct messages during the 2016 presidential campaign after The Atlantic first reported on the correspondence.

The messages, The Atlantic pointed out, “are part of a long—and largely one-sided—correspondence between WikiLeaks and the president’s son that continued until at least July 2017” and suggest WikiLeaks, “a radical transparency organization that the American intelligence community believes was chosen by the Russian government to disseminate the information it had hacked, actively soliciting Trump Jr.’s cooperation.”

After The Atlantic went public with the messages, Trump Jr. decided to post them to his personal Twitter account. “Here is the entire chain of messages with @wikileaks (with my whopping 3 responses) which one of the congressional committees has chosen to selectively leak,” he wrote. “How ironic!”

Assange was arrested and charged with a single count of conspiracy to hack a classified Defense Department computer. He is accused of conspiring with U.S. Army intelligence analyst Chelsea Manning, then known as Bradley Manning, to obtain a government password and release secret government documents. Manning served a seven-year prison sentence for her role in providing 750,000 classified, or unclassified but sensitive, documents to WikiLeaks, a violation of the Espionage Act.