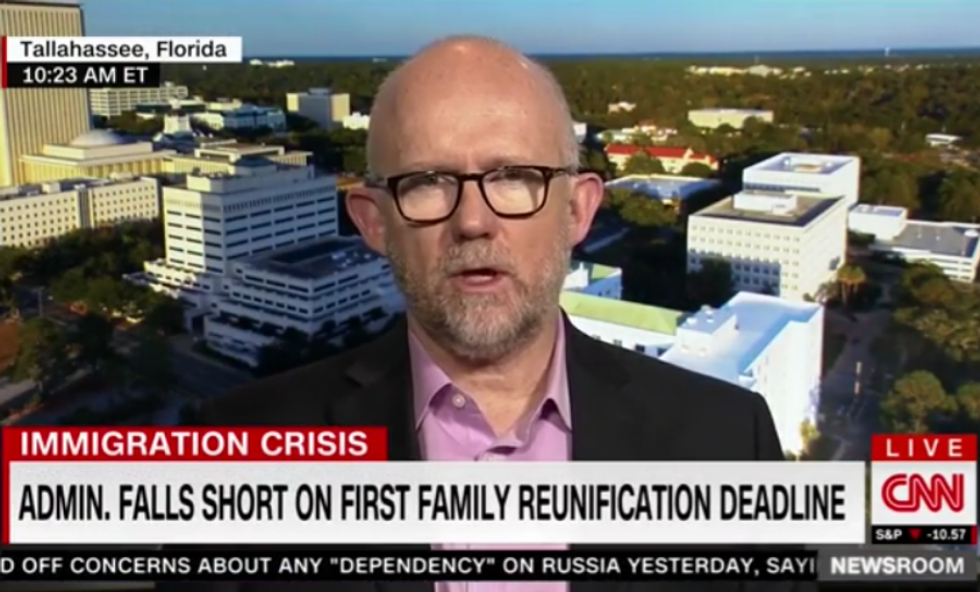 During a segment Tuesday on CNN, Republican pundit, political strategist and media consultant Rick Wilson made some pointed remarks aimed at the administration of President Donald Trump and their zero tolerance immigration policy.

The CNN host, Poppy Harlow, had just finished airing video of a reunion between a father and son who were separated by the Trump administration policy.

On orders from the president, in a strategy designed by White House adviser Stephen Miller, Attorney General Jeff Sessions enacted the change in May. Sessions revoked prosecutorial discretion within the Department of Justice regarding anyone entering the United States through the southern border without prior authorization.

In the segment, Harlow introduced Wilson as a former strategist for current Trump lawyer, Rudy Giuliani. She then asked Wilson about the optics of crying children and the impact it could have on the Trump administration, stating "...do pictures like [CNN correspondent] Rosa [Flores] just showed us of this little boy being reunited with his father after 43 days, will those haunt this administration?"

To which Wilson replied,

"Well, I think the pictures of the cruelty of this administration are a very deliberate part of this. They're a feature, not a bug, of the Trump administration's policy. And so I think that we're in a situation where no one inside the administration is unhappy about these things because they're only talking to their base."

"They're not happy about, you know, immigration of any kind. They don't believe in the asylum process."

They want to take and separate these families as a matter of deterrence and as a matter of —like I said— a sort of theater of cruelty. And I think it really doesn't speak well to their moral standing."

As Wilson continued to speak, a visibly uncomfortable Harlow and her other guest, Democratic strategist and political commentator, Joe Trippi, spoke over him briefly.

"That's quite an argument. I mean, you're saying the administration wants this. They want —I mean I get it's their practice— but I'm saying they want these pictures, they want it to play out like this, they... really?"

To which Wilson responded again with information that appeared to rattle Harlow and Trippi, stating,

Yes. And there's been some reporting on this. Stephen Miller and the guys in the white nationalist faction of the party are very happy about this. They love the whole optics of this cruel sort of exercise."

Harlow initially attempted to cut Wilson off, but eventually said, "Okay," and then directed a question to her other guest.

However Trippi agreed with Wilson's assessment.

Yes, but it's... I think Rick's right that this was intended to be a cruel policy, on purpose, as a deterrent, and it... you know, and... that's why the optics are so bad. They wanted people to see this cruelty and wanted... and wanted their base to see it."

"The problem with that for them is that the... you know," Trippi continued, "the American people, majority of them, are far more compassionate than the cruelty of this policy and are putting the pressure... and literally made the administration back off at least say they were going to reunite them."

Now that's not working because they were so incompetent at implementing the policy in the first place. There is a coat check policy at restaurants that are better than what they've done. And I know that's a cliche and other people have said it, but it is absolutely true. They had no, no intention of returning these children to their families. Ever. Now they have to, and that's why they're having so much trouble doing it."

This is not the first time the Trump administration faced accusations of White Supremacist leanings.

Several former and current advisers, like Steve Bannon and Stephen Miller, have ties to organizations cited for White Supremacist actions or been cited for use of White Supremacist rhetoric. Their inclusion in the Trump White House inner circle drew heavy criticism.

Bannon eventually resigned but Miller remains a senior adviser to the president.

The president also defended alt-right demonstrators at the Unite the Right rally in Charlottesville, Virginia, in 2017. Heather Heyer was murdered by an avowed White Supremacist who drove a car into a group of counter protesters. Dozens of others were injured.

The president's remarks earned him accolades from former Ku Klux Klan Grand Dragon David Duke and other leaders of the White Supremacist movement. And in May 2018, Duke claimed the president made promises to White nationalists that he needed to fulfill.

While social media and various news agencies are discussing Wilson's remarks about the Trump administration, no official response has yet been issued by the White House.

The Trump administration is currently under court order to reunite the children with their families. US District Judge Dana M. Sabraw ordered the administration to return 102 children under the age of 4 by Tuesday, but Homeland Security under Kristjen Nielsen, whose ICE agents are responsible for the majority of the family separations, and Health and Human Services under Alex Azar, whose responsible for housing the children, failed to accomplish the task.

Sabraw also gave the administration until July 26 to return all of the roughly 3,000 children to their families.