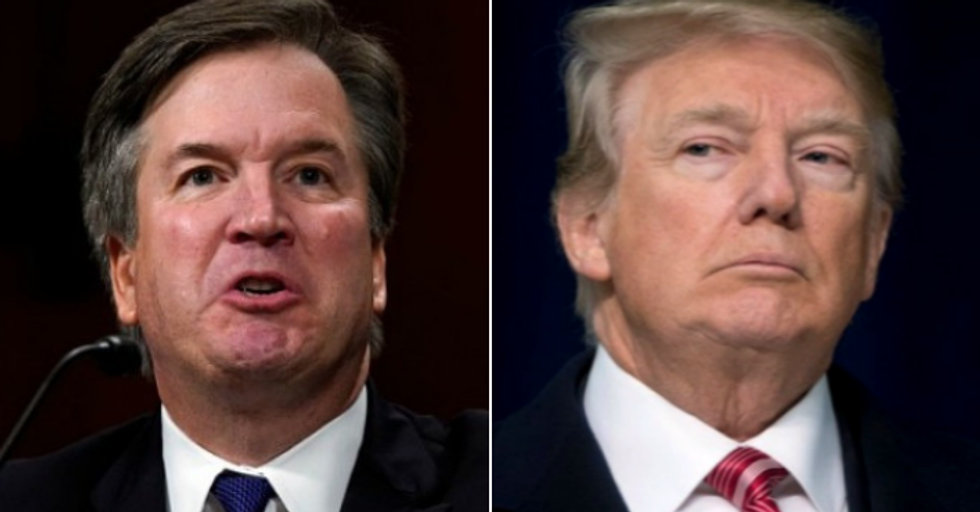 In a wide-ranging press conference Monday, one of the claims made by President Donald Trump involved the Thursday and Friday testimony of his Supreme Court nominee, Brett Kavanaugh. Kavanaugh testified under oath before the Senate Judiciary Committee as part of his SCOTUS confirmation hearing.

Trump stated Kavanaugh admitted to a serious drinking problem when he was underage and drinking illegally in high school and college.

President Trump on watching Judge Kavanaugh testify: “I watched a man saying that he did have difficulty as a you… https://t.co/DNhIqdRl2C
— NBC News (@NBC News) 1538413309.0

However those who watched Kavanaugh's testimony refuted the President's claim.

Correct me if I'm wrong, but I don't recall Kavanaugh saying he had "difficulty" with drinking. He tried to convey… https://t.co/df0cp9zMTL
— Maggie Haberman (@Maggie Haberman) 1538411650.0

@JohnJHarwood Did Trump miss how Kavanaugh went after Senator Klobuchar when she tried to ask about his drinking?
— Blue (@Blue) 1538412462.0

People speculated as to why Trump would expose his own nominee to ridicule for lying under oath about his drinking problems while still under the legal age to drink.

@JohnJHarwood Trump knows more than we do. Kavanaugh was a binge drinker. A consequence of Binge drinking is blackouts.
— Kim Budanit (@Kim Budanit) 1538416530.0

Correct me if I'm wrong, but I don't recall Kavanaugh saying he had "difficulty" with drinking. He tried to convey… https://t.co/df0cp9zMTL
— Maggie Haberman (@Maggie Haberman) 1538411650.0

Many wondered if the admission that Kavanaugh had a drinking problem in high school and college was an attempt by Trump to rid himself of his embattled SCOTUS nominee.

Exposing Kavanaugh lying to the Senate Judiciary Committee could give the President a reason to revoke his nomination.

@MelissaMermaid @NBCNews Kavanaugh said when asked how much is too much drinking? whatever the charts say is howeve… https://t.co/7cVoIigwFU
— Debra Jean Kennedy (@Debra Jean Kennedy) 1538414377.0

@ArrestALSNow @JohnJHarwood He responded to Senator Klobuchar “neither do I” when she said I don’t have a drinking problem.
— Simone forever (@Simone forever) 1538413864.0

As of Monday afternoon, Brett Kavanaugh has not withdrawn as a SCOTUS nominee nor has President Trump revoked the nomination.