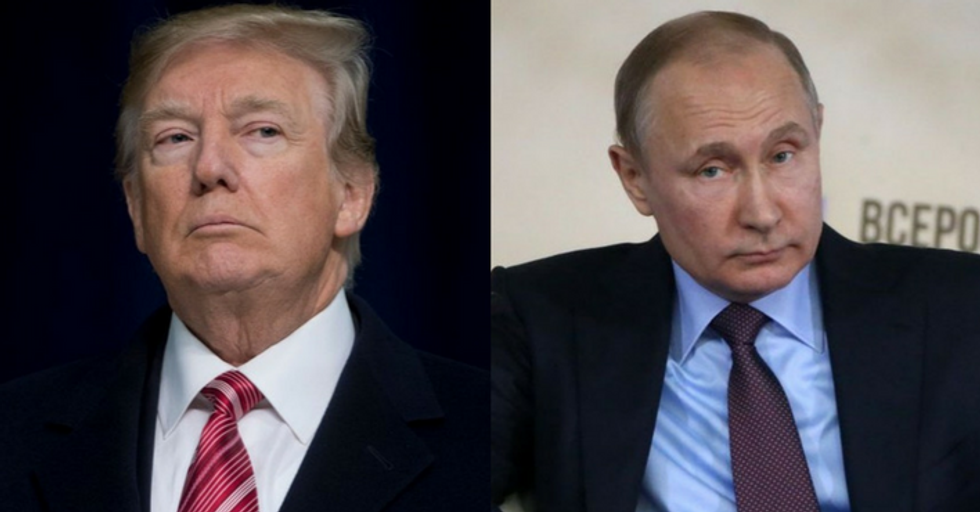 Over the weekend, Douma, a Syrian rebel held city near the capital of Damascus, suffered a chemical weapons attack, killing an estimated 42 people and injuring at least 500 according to the World Health Organization.

With approximately 100,000 civilians in the Syrian city, condemnation for the chemical attack is widespread among the United States and her allies.

Pressure placed upon President Donald Trump to respond to the attack in some way mounted since the incident was first reported. This morning, at 6:57am EST, the deaths  finally elicited a response.

The president placed Russian and Syrian forces on alert, via Twitter.

Russia vows to shoot down any and all missiles fired at Syria. Get ready Russia, because they will be coming, nice… https://t.co/tFXJAYDnOh
— Donald J. Trump (@Donald J. Trump) 1523444250.0

Trump's early morning Tweet was a reaction to claims made by one of Moscow’s ambassadors that Russia would shoot down US missiles launched at Syria. The ambassador cited newly reelected Russian president Vladimir Putin and his generals as the source of his statement.

Russia is allies with the Syrian government of dictator Bashar al-Assad. Russia is expected to defend his government should the United States or allied forces attack Syria.

The president also took the opportunity to take a swipe at the Russia investigation, blaming it for his faltering relationship with Putin.

Russia was not pleased.

Smart missiles should fly towards terrorists, not (Syria’s) lawful government, which has spent several years fighting against international terrorism on its territory."

Zakharova stated a possible United States missile strike on Douma could be an attempt to destroy evidence of the alleged chemical weapon attack. Both Russia and Syria deny the chemical attack in Douma ever occurred, branding it “fake news”.

A source from the Kremlin claimed the chance of war between the United States and Russia is now “8 out of 10”.

Bryan MacDonald, the journalist who verified the Russian comment about the chances of war, also highlighted a few of the president's past Tweets regarding the United States and Syria, from 2013. Trump's comments were in response to President Barack Obama's handling of tensions with Russia and Syria.

Be prepared, there is a small chance that our horrendous leadership could unknowingly lead us into World War III.
— Donald J. Trump (@Donald J. Trump) 1377942367.0

The current early morning Tweets came in a flurry of anger against the media and advancement in the investigation into Russian involvement in the 2016 presidential election and possible ties to the Trump campaign.

The hour and veracity of the mini Tweet storm, a series of 6 Tweets beginning before 7:00am and ending around 9:00am, raised some eyebrows. Many also criticized making the announcement on such a public forum.