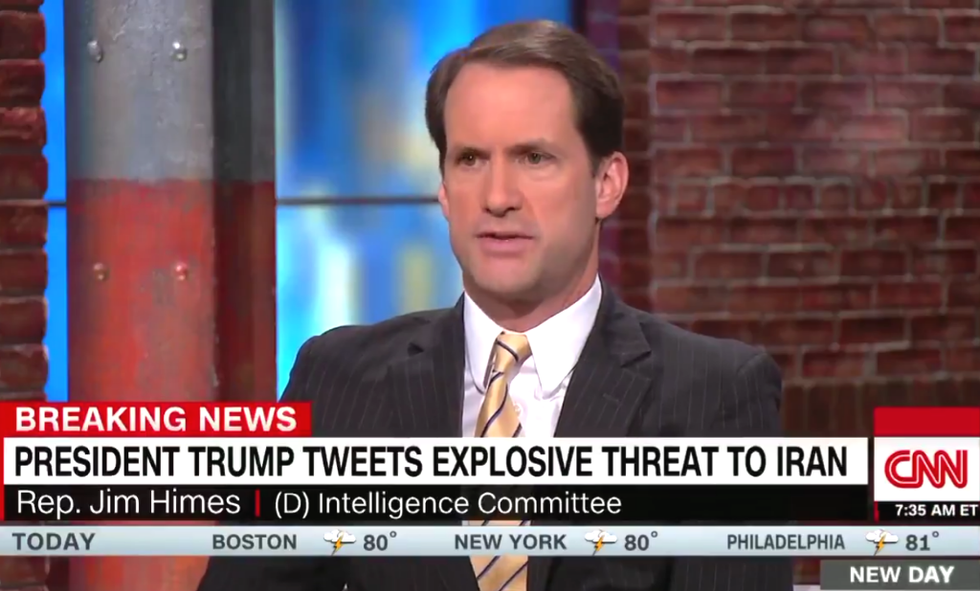 In an interview on CNN program New Day, Connecticut Democratic Representative Jim Himes made a charge that others echoed: President Donald Trump sees provoking a war as a way to solve his political problems.

In the wake of the President's late Sunday all caps Twitter threat directed at Iranian President Hassan Rouhani, people had questions and concerns. Are we going to war?

Himes, who serves on the House's Intelligence Committee, stated in his New Day interview Monday morning that things are not dire enough to characterize the United States and Iran as being on the brink of war just yet.

"Look, I think it's an overstatement to say that we're at the brink of war," Himes told New Day anchor Alisyn Camerota. "I think that's — I think that's probably not true."

What concerns me more is that if you look back at a bunch of President Trump's tweets before he was president, he criticized, several times, Barack Obama and said 'you just wait, he's going to start a war with Iran if he feels like he's on the political ropes' — and so, that's in his head. That's what worries me."

"So clearly, he understands this modus operandi. He's thinking of this modus operandi,"  Camerota remarked after sharing several past tweets from Trump. "This is in his head. So where does that leave us with what he's doing today?"

Himes responded by stating United States citizens no longer have the specter of war in the Middle East at the front of their conscientiousness like they did 10 years ago during the height of the war in Iraq.

"...most people have forgotten what it is to open the newspaper every single day and to read four or five or six American names who were killed in a Middle Eastern war."

"And if Iraq was tough, wait until you try Iran. Iran is a much more powerful country than Iraq ever was."

Anyway, my point being that we need to be very sensitive to the fact that this president, who doesn't have a very sophisticated sense of international relations, regards a war as a way to solve political problems and that's a scary thought."

Watch the interview where it picks up here.

Camerota then asked Himes what can be done to avoid war as a political ploy.

"Well, I think — I think two things can happen in the Congress," Himes responded.

The big thing is that Congress finally, after generations, needs to reassert its constitutional authority and duty to be the entity in the U.S. government that actually declares war. You know, this has been a problem under Democratic and Republican presidents, you know, and there are efforts. It's just that they don't seem to go anywhere."

"Secondly — look, I think we are approaching November," Himes continued, alluding to the midterm elections on Tuesday, November 6. "November is going to be very interesting."

I still think even though most Americans are starting to forget the horrors of the Iraq War that there is an ability to say hey, do we really want to go back to the brink? Do we really want to contemplate another Middle Eastern war? That could become an election issue."

Himes is not the first to point to the 45th President's tweets about starting a war just to distract the public and bolster public support. Others in the Twittersphere pointed this out today too.

The tactic is often referred to as "wagging the dog" since the 1997 film, Wag the Dog, featured a president facing scandal shortly before an election fabricating a war with Albania as a distraction. The actual definition of the idiom differs slightly.

People on Twitter are sharing Trump's tweets where he accuses Obama of potentially using the tactic.

Others are simply accusing Trump of wanting to "wag the dog."

Someone is getting ready to wag the dog, using war to distract us from their own betrayal of America. Also, the bit… https://t.co/OUuxIr5aD6
— Paul Krugman (@Paul Krugman) 1532326808.0

Having Iran hawks Bolton and Pompeo in the administration right now adds no comfort to this situation.
— Ahmed Baba (@Ahmed Baba) 1532317134.0

Seeing an opportunity to drag the convo away from the utterly weak, pathetic performance with Putin, @AmbJohnBolton… https://t.co/nDNqTRybqZ
— VoteVets (@VoteVets) 1532354310.0

While others are going straight for the Russian connection.

The final fallout from Trump's Twitter threat to Rouhani, and the impact on the 2018 midterm elections, remains to be seen.