Donald Trump Says He Doesn't Talk the Way Bob Woodward Portrays Him in His Book, but The New York Times Has the Receipts 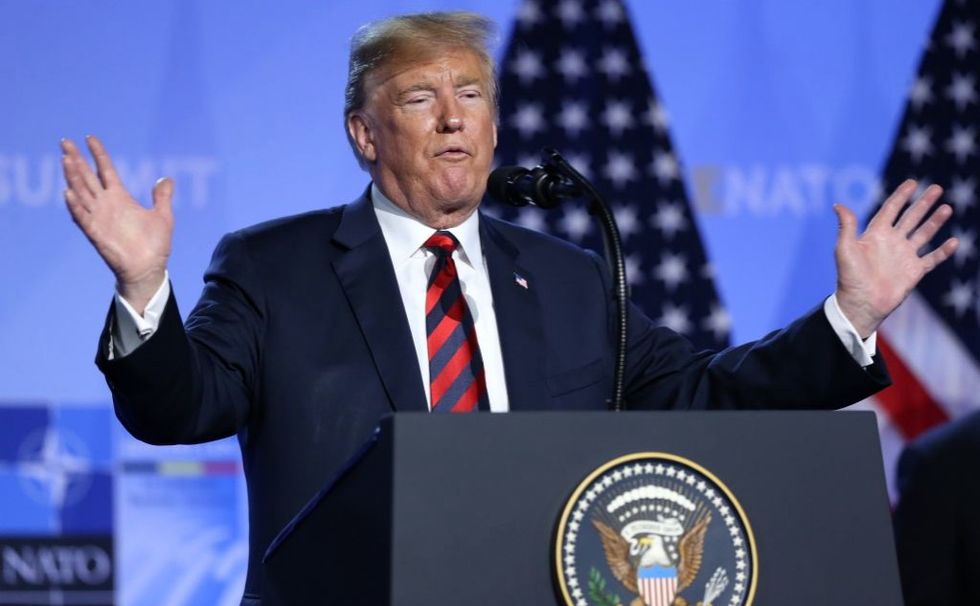 U.S. President Donald Trump speaks to the media at a press conference on July 12, 2018 in Brussels, Belgium. (Photo by Dursun Aydemir/Anadolu Agency/Getty Images)

But President Donald Trump appeared unhappy to receive the Woodward treatment. He launched a Twitter campaign blasting Woodward and got signed statements from several of his remaining White House senior staff disavowing any participation in the book.

In another effort to discredit Woodward's book on Twitter, the President claimed the book got his speaking habits wrong. He posted:

"The Woodward book is a scam. I don’t talk the way I am quoted. If I did I would not have been elected President. These quotes were made up."

But did the book get it wrong? While Trump said yes, The New York Times said no. And then The Times backed it up.

One of the quotes Trump disputes involves him referring to embattled Attorney General Jeff Sessions. The book quotes Trump calling Sessions "mentally retarded" and a "dumb Southerner." Trump took to Twitter to deny the quotes. He stated:

"Woodward book...has me calling Jeff Sessions 'mentally retarded' and 'a dumb southerner.' I said NEITHER, never used those terms on anyone, including Jeff..."

Trump got caught on tape using the terms "retarded" or "mentally retarded." In a Howard Stern show appearance on April 16, 2004, Trump used the phrase to refer to a reporter who criticized him. He said:

"I know I was criticized in one magazine where the writer was retarded, he said: ‘Donald Trump put up $7 million, they put up $193 million and they are 50/50 partners. Why isn’t Donald Trump putting up more money?’ And you know it is supposed to be because I am smart."

"I have a golf pro who’s mentally retard—I mean he’s really not a smart guy. And I’m playing golf and I’m thinking about what I’m going to tell NBC and this golf pro comes up to me and tells me, 'Yeah, but your show is an hour and Friends is a half-hour'."

The Daily Beast reported in 2016 that Trump also used "retarded" to refer to actress Marlee Matlin, who is deaf, when she appeared on his television show Celebrity Apprentice.

As for his use of "dumb Southerner," someone with established ties to the President went on the record stating he said it. Her name is Jeane MacIntosh. But what is her connection to Trump?

To increase his own brand recognition, Trump for decades gave stories to gossip columns. The President never denied it and ample proof exists.

MacIntosh is a former deputy editor at the New York Post gossip column Page Six, a favorite of New Yorker Trump. She recalled him using the phrase “dumb southerner” with her as well as the specific context.

MacIntosh contacted Trump in May 1997 for his reaction on a tip she received involving his second wife, Marla Maples. Rumor was Maples purchased two gold Lexus cars and Trump made her return them.

According to MacIntosh, Trump offered her a better story if she agreed to drop the Lexus tip. The bigger scoop was Trump's plan to divorce Maples. When asked why he wished to leave his wife of four years, Trump "essentially blamed her family" referring to Maples's relatives from Georgia. Trump then said:

"Are you old enough to remember the show 'The Beverly Hillbillies'?"

"That’s exactly her family, except they came to New York City instead of Beverly Hills."

When MacIntosh asked for clarification, Trump described being inundated "by an entourage of dumb Southerners." He also affected a fake southern accent to mimic Maples's mother.

While Twitter gives you the chance to examine your words before posting, live radio does not. And it is when speaking candidly that the President made most of his biggest blunders.

Mistakes like bragging to Billy Bush over an Access Hollywood hot mic about grabbing and kissing women without asking and "grabbing them by the pussy." It was also during live appearances that Trump talked about dating his eldest daughter, the future size of his other at the time 1-year-old daughter's breasts and of walking into dressing rooms while women or underage girls changed at the pageants he once owned.

Woodward—together with Carl Bernstein—covered the Watergate scandal for The Washington Post and outlined in their best-selling book and the acclaimed film All the President's Men. Since then, Woodward—now an associate editor with The Washington Post—authored 17 more books covering politics.

Those 17 books include each of the Presidents since Nixon. In a recorded August phone call with President Trump, Kellyanne Conway confirms Woodward made at least a half dozen attempts to interview Trump for his side of the story while he was writing the book.

Fear: Trump in the White House comes out on September 11 in hardcover, digital and audio formats.