Donald Trump Is Getting Dragged for a Video He Posted of Himself and Melania Paying Their Respects to George H. W. Bush, and It's Classic Trump 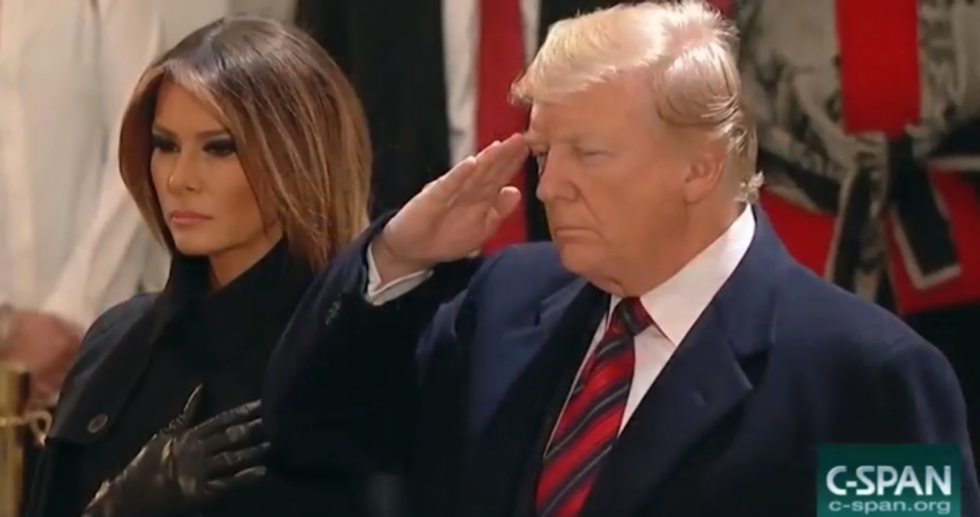 President George H. W. Bush lies in state at the Capitol Rotunda to allow people to pay their respects before his state funeral on Wednesday at the National Cathedral. On Monday, President Donald Trump and First Lady Melania Trump visited.

Afterward, Trump took to Twitter to post a video in tribute to "41," in reference to Bush's place as the 41st President. However, the video drew more ire than accolades.

People had strong reactions to the video shared by Trump on Twitter, accusing the President of being a narcissist, self-absorbed and an egomaniac. Many felt the video had little to do with President Bush.

@realDonaldTrump Seems kind of ghoulish to put out a promotional video of yourself visiting 41.
— ArchieTex (@ArchieTex) 1543922416.0

@realDonaldTrump @jonathanvswan Thought you were putting up a nice video about President Bush, but it’s about you again.
— LUCY PEARS (@LUCY PEARS) 1543926987.0

Others could not forget the Trump's unkind words about the Bush family.

@realDonaldTrump You had no respect for him when he was alive. Amazing how it changes when it’s convenient for you.… https://t.co/uB80LZLm9t
— Deborah Newell (@Deborah Newell) 1543925101.0

@realDonaldTrump Where are the Bushes in this video? I watched the ceremony yesterday, it definitely wasn't this em… https://t.co/s7Mc5rX4jC
— Brian J Wrights (@Brian J Wrights) 1543931861.0

Many remarked on the odd choice of tributes displayed by the First Lady and President aside the casket.

FLOTUS Melania Trump placed her hand over her heart, in the same gesture President George W. Bush made when his father's casket passed. But President Trump offered a brisk salute.

The etiquette and rules about saluting are complicated. But many veterans called Trump's use of the gesture incorrect and inappropriate.

@frankthorp @NBCNews @MELANIATRUMP Refresh my memory what branch of the military did he serve in to salute!
— Deirdre (@Deirdre) 1543887818.0

@CNNPolitics Watching trump surrounded by all the military personnel is so offensive. He doesn't deserve any hand salute.
— Gracie (@Gracie) 1543887751.0

@CNN In my heart as a former marine it offends me to see a draft dodger salute. My opinion is trump not deserving
— Kenneth Simon (@Kenneth Simon) 1543888160.0

Ass. Has no rights to salute. Avoided the draft 5 times with lies about bone spurs AND afraid to visit troops SAYS… https://t.co/GSEUatd6RI
— Karol Funch (@Karol Funch) 1543889022.0

President Bush served in active combat in WWII, the last President to do so. President Trump never served in the military.

Prior to President Reagan, no President returned salutes to military personnel as the gesture was reserved for those in uniform. But Reagan, who served in WWII, began returning the gesture from military members when boarding his helicopter.

Since then, Presidents continued the tradition Reagan started.

However, President Trump seems exceedingly fond of the gesture and draws criticism for saluting anyone who salutes him. When the 45th President saluted back at a North Korean military official, people were outraged.

After Wednesday's state funeral, on Thursday, there will be a memorial for President Bush at St. Martin's Episcopal Church in Houston where his wife, Barbara's memorial occurred. Bush will be laid to rest at his presidential library in College Station, Texas, beside his beloved wife.