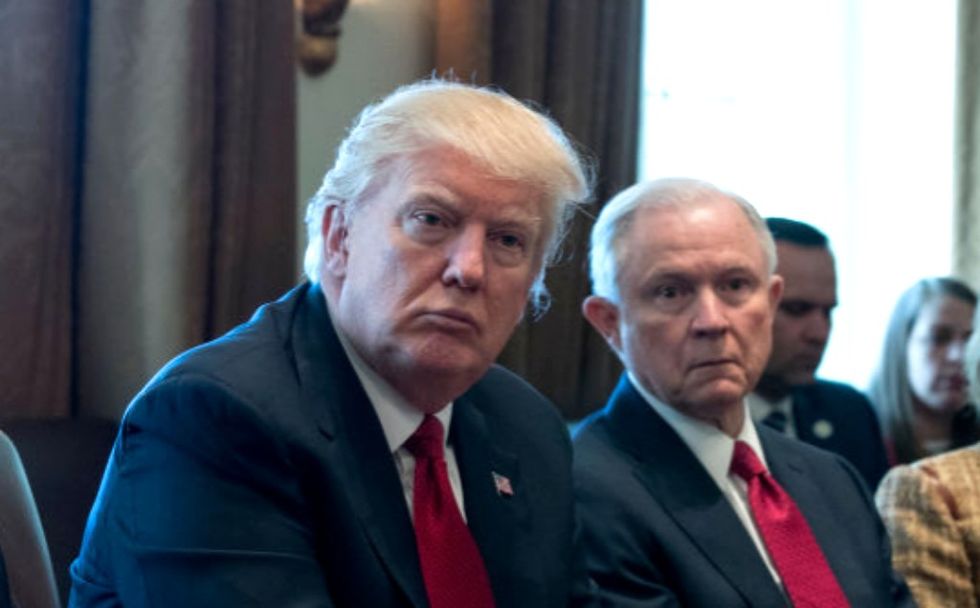 But less than a week later, Trump gave the Mueller team more to look at.

..This is a terrible situation and Attorney General Jeff Sessions should stop this Rigged Witch Hunt right now, before it continues to stain our country any further."

In May 2017, Attorney General Jeff Sessions recused himself from the investigation due to potential conflict of interest. His Republican Deputy and fellow Trump appointee, Rod Rosenstein, tapped former FBI director Mueller to head the investigation into Russian interference in the 2016 presidential election and any ties to the Trump campaign.

This is a first. Trump directs his attorney general to end the Russia investigation. https://t.co/zshFQ2dUpY
— Kaitlan Collins (@Kaitlan Collins) 1533130085.0

After the May 2017 firing of FBI director James Comey, allegations of Trump pressuring the FBI and DoJ to drop the investigation surfaced during congressional hearings. This pressure from the President, if substantiated, could qualify as obstruction of justice.

The President of the United States just called on his Attorney General to put an end to an investigation in which t… https://t.co/bCoMXgnUig
— Adam Schiff (@Adam Schiff) 1533131742.0

The law defines obstruction of justice as:

the crime or act of willfully interfering with the process of justice and law especially by influencing, threatening, harming, or impeding a witness, potential witness, juror, or judicial or legal officer or by furnishing false information in or otherwise impeding an investigation or legal process"

Wednesday morning's tweet appears as a less than subtle message directed at the head of the Department of Justice, AG Sessions. It was one in a series of five tweets where the President again painted the Mueller investigation as a baseless witch hunt.

But as of the end of July, 2018, 32 individuals and 3 businesses were indicted, with several guilty pleas and one sentencing with others currently on trial. The Trump administration also revealed over the course of the year that they communicated and met with Russian representatives including at least one admitted Russian operative.

The President uses Dershowitz's quote to attack Mueller and the FBI again.

Then came Trump's edict to his Attorney General...

...followed by an attempt to distance himself from his former campaign chairman, Paul Manafort...

...ending with statements attacking the Democratic Party and members of law enforcement.

Russian Collusion with the Trump Campaign, one of the most successful in history, is a TOTAL HOAX. The Democrats pa… https://t.co/BAyz1DuKKq
— Donald J. Trump (@Donald J. Trump) 1533132113.0

Reactions to the President's Sessions directive were mostly negative.

@realDonaldTrump The day of your arrest and/or resignation will forever be a National holiday. It will be called “F… https://t.co/z7c0USAiWH
— Rick Kyker (@Rick Kyker) 1533129853.0

@realDonaldTrump OBSTRUCTION OF JUSTICE! You aren't very bright to be making an OFFICIAL statement like this. "B… https://t.co/O2IJPsZdtI
— AZScorpion_Tail (@AZScorpion_Tail) 1533134301.0

@realDonaldTrump How low our country has sunk that a portion of it admires a 5X Draft Dodger who badmouthed America… https://t.co/UAMhyFZTSy
— Bruno Amato (@Bruno Amato) 1533130554.0