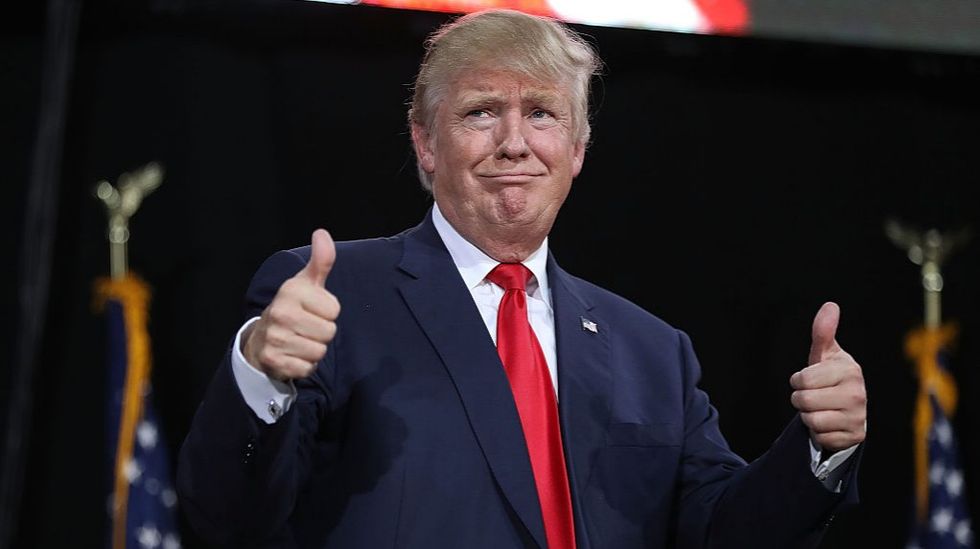 President Donald Trump may well be remembered partly for his adversarial relationship with the press. Beginning during his campaign for President, Trump attacked the free press as "fake news" whenever they shared facts critical of him.

But Trump's hatred of the press doesn't extend to all news outlets. His mutual admiration with the denizens of the couch on Fox News morning show Fox and Friends is well documented. The show is accused of being little more than Trump administration propaganda and the President is criticized for treating the show as an official policy adviser.

Other ultra-right wing shows and conspiracy theory media pundits such as Breitbart and the now largely defunct Infowars also have the ear of the President. Now another new favorite has emerged, the political journalism website and weekly magazine, the Washington Examiner.

On Tuesday President Trump touted a story shared by the Washington Examiner on his Twitter account. He posted:

So what was the story?

An exclusive list, created by President Trump and his "top White House aides" and given to the Washington Examiner for publication in their column, "Washington Secrets." So the President shared that a list of accomplishments—that he created about himself—are true.

People were quick to point this out to the President.

MBFC describes the Washington Examiner as "media sources are moderately to strongly biased toward conservative causes through story selection and/or political affiliation. They may utilize strong loaded words (wording that attempts to influence an audience by using appeal to emotion or stereotypes), publish misleading reports and omit reporting of information that may damage conservative causes. Some sources in this category may be untrustworthy."

This is not to say that Washington Examiner is untrustworthy, just that they may not dispute the claims made by right-wing media sources and that some of their sources are not trustworthy—like someone who writes a list of their own accomplishments based on their own opinion of themself.

People had plenty to say about the validity of Trump's self-assessment, shared exclusively with a right biased news site.

However the Washington Examiner disclosed the source for their article several times in their coverage. At the beginning of the article they included a quote from the President about the list.

And just before the "MAGA 205" list they again made it clear the list was merely a word for word from the White House.

The Toronto Star's Daniel Dale, who fact-checks Trump daily, cited the Washington Examiner's own copy in his rebuttal.

Others pointed the fact out to Trump directly.

@realDonaldTrump The Washington Examiner (laughable enough) was given a list to print, by you. That’s not reporting, that’s propaganda.
— cj (@cj) 1546402392.0

And some pointed out that this was not the first time the White House handed the Washington Examiner a list to publish.

The one thing no one seems to be discussing is the 205 historic MAGA accomplishments Trump and his top White House aides claim the Trump administration made. Trump's own tweet may have derailed his planted story.

*As a matter of full disclosure, Second Nexus is ranked as "Left-Center" by MBFC, defined as "media sources have a slight to moderate liberal bias. They often publish factual information that utilizes loaded words (wording that attempts to influence an audience by using appeal to emotion or stereotypes) to favor liberal causes. These sources are generally trustworthy for information, but may require further investigation."