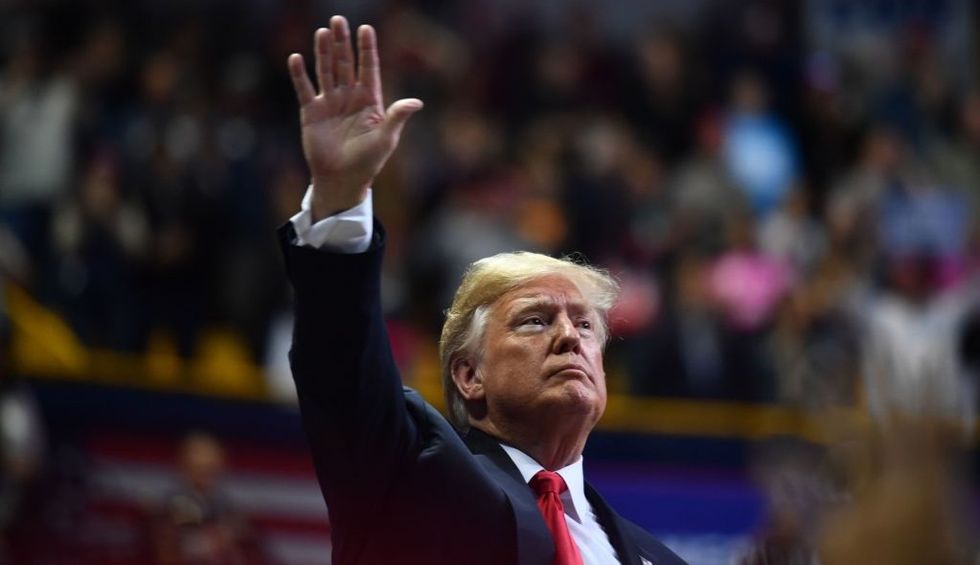 On Monday, the day before the 2018 midterms, President Donald Trump took to his Twitter account to float a favorite conspiracy theory. Back in the 2016 presidential campaign, Trump claimed voter fraud accounted for all of his losses in the primaries and in losing the popular vote to Hillary Clinton by about 3 million votes.

The President appointed a commission after he took office to look into voter fraud. But Trump's group disbanded after months of finding no evidence to support the President's claims.

One commission member went public with complaints of a tainted and biased process desperate to find anything to support Trump's conspiracy theory that he won the popular vote.

Now the President is warning voters that "Law Enforcement" will be "watching closely" on Tuesday for "ILLEGAL VOTING." Trump tweeted:

"Law Enforcement has been strongly notified to watch closely for any ILLEGAL VOTING which may take place in Tuesday’s Election (or Early Voting). Anyone caught will be subject to the Maximum Criminal Penalties allowed by law. Thank you!"

Law Enforcement has been strongly notified to watch closely for any ILLEGAL VOTING which may take place in Tuesday’… https://t.co/QbE9BAR7bx
— Donald J. Trump (@Donald J. Trump) 1541432508.0

Social media failed to feel reassured that Trump alerted law enforcement. Many saw the tweet as an attempt at voter suppression through intimidation.

@realDonaldTrump NEVER LET ANYONE, INCLUDING OUR PRESIDENT, INTIMIDATE YOU OUT OF VOTING. Express your right to vote!!!!!
— Laurie Hicks (@Laurie Hicks) 1541449740.0

Others pointed out some issues with the GOP and voting. Or President Trump and illegal activities.

Others thought Trump intended to sow seeds of doubt about any election results that failed to go in his favor.

@realDonaldTrump You are so predictable. Knew you were going to say the election is going to be rigged. Republicans… https://t.co/TRy0NqhaqY
— KAS22@KaaRinn (@KAS22@KaaRinn) 1541448428.0

@realDonaldTrump I never see or need law enforcement at my polling station. Which part of the 3rd Reich do you vote at?
— Russ Stoneking (@Russ Stoneking) 1541448709.0

Midterm elections are slated for Tuesday, November 6, 2018. To learn what your rights are as a voter, visit the ACLU voter rights webpage.