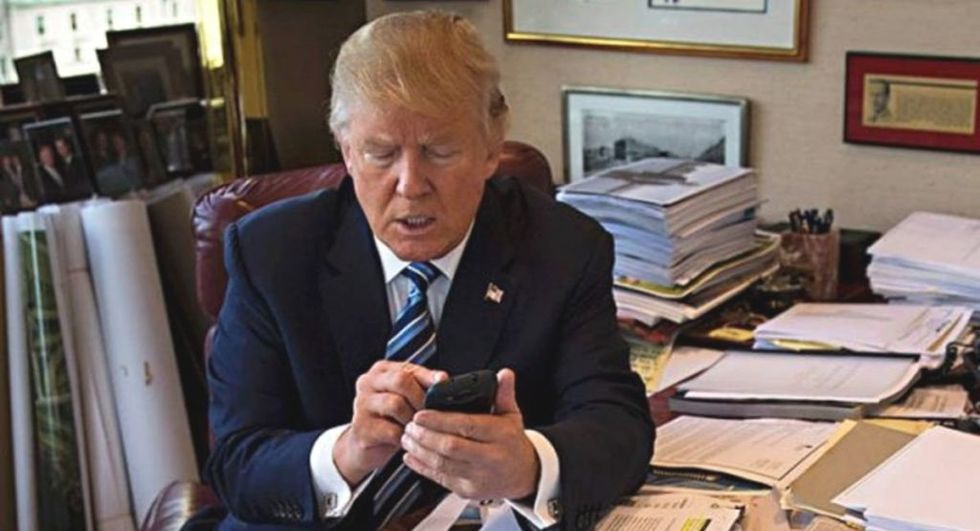 Donald Trump demonstrates how he uses his smartphone. (Samsung/YouTube)

Were they an attempt to discredit the Mueller investigation into Russian meddling in the 2016 presidential election—now that Trump's former Washington lobbyist and campaign manager struck a deal—by creating an 'everyone meddles in our elections' narrative? While it is unlikely, it is possible.

Or were they an attempt to strong arm China in the trade war Trump started, but seems to be losing based on companies forced out of business in the United States and on $6 billion in farm bailouts Trump authorized? This also seems unlikely as China could chalk this up to just another Trump Twitter smear campaign against them.

Or is the President trying to turn his falling job approval numbers and rally attendance around in hopes of bolstering support for the GOP heading into November's 2018 midterm elections by telling those who no longer support him they are pawns of a foreign government? This seems the most likely motive.

China has openly stated that they are actively trying to impact and change our election by attacking our farmers, r… https://t.co/AaTAXri1l2
— Donald J. Trump (@Donald J. Trump) 1537275029.0

Indeed, many of the tariffs China imposed hit Trump support bases in the farming and ranching areas of the South and midwest. However, those tariffs hit major products exported to China.

Standard strategy in any war is to hit the opponent where it hurts them most. Increasing tariffs on products China does not import or is unable to get through other supply channels makes no strategic sense.

As for Trump's statement on industrial workers, their impact came because of one of the first tariffs Trump imposed against China as well as Canada, Mexico and the EU, not actions taken by China in response to Trump's tariffs.

The President imposed tariffs on steel and aluminum from most of the international supply chains used by industrial manufacturing in the United States. Several major manufacturers stated they would move operations overseas as a result, while smaller factories simply shut down.

In a war, you fight to win. To expect your opponent to do otherwise is naive and dangerous.

But did Trump's inexperience with international trade and foreign relations mean he had no idea how trade partners would react? Did he expect to impose tariffs and receive no retaliation?

The President's tweets point to a great deal of naivete which is why many wonder at another motive for the message. While the President began a trade war with China, firing the first shots, his Twitter posts appear to say he cannot believe China not only responded, but they responded well strategically.

People posit, surely Trump could not be that naive.

And China surely did respond well. They even created this bit of propaganda for the conflict.

In July, China decided to let a soybean do the talking for them and explain why a trade war with them would not benefit the United States or anyone growing soybeans.

If you are losing a war or support from your base because of it, is the best strategy to point out your opponent is better at warfare than you?

Or is Trump hoping to simply capitalize on asserting anyone who no longer supports him because of his trade war, somehow supports China?

Reactions to the President's tweets indicate, at least among those responding, no one is buying what Trump is selling. Several tried to explain to the President how tariffs work and why he is losing the trade war he began.

@realDonaldTrump You are definitely the Sybil of Presidents! Many many personalities & all are shit!!! & Delusiona… https://t.co/c6FuzoJ5Yr
— Frank D'Angelo (@Frank D'Angelo) 1537279937.0

@realDonaldTrump How can you still not understand that tariffs are paid by importers & passed along in increased pr… https://t.co/WxZJjqjCkN
— Sherry B (@Sherry B) 1537277537.0

@realDonaldTrump The only person actively attacking our farmers is the clueless fool in the Oval Office. His tra… https://t.co/YXlGhnalUv
— Jay Williams (@Jay Williams) 1537281170.0

China has not yet responded to the President's tweets.