Donald Trump Made a Questionable Comparison Between Paul Manafort and Al Capone, and Now People Are Giving Trump a History Lesson 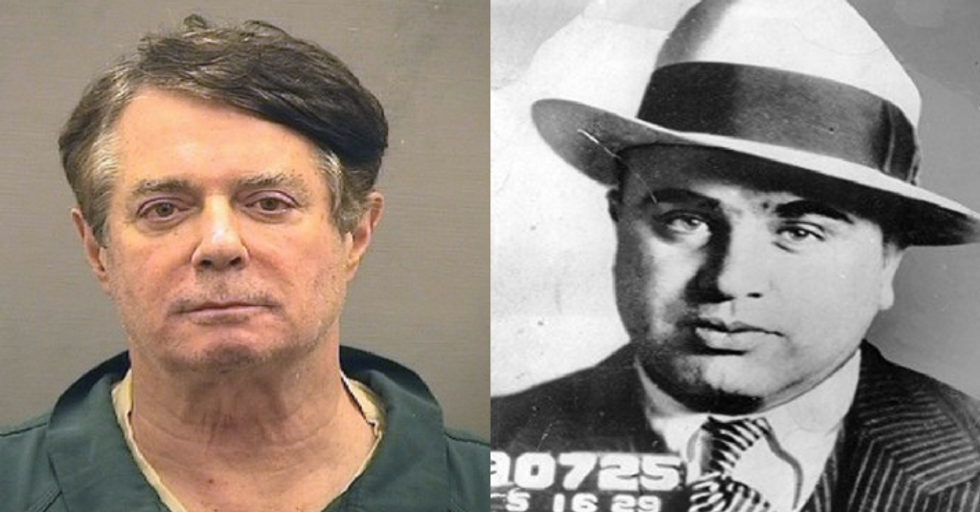 As with his stance on Russian cyber threats, President Donald Trump vacillates on his ties to his former campaign manager, Paul Manafort, as well as his opinion of Manafort's character. On the President's Twitter account, Manafort plays both villain and victim ever since his implication and indictment in the Mueller Russia investigation.

The trial of Paul Manafort began Tuesday, July 31, 2018. In Wednesday's Trump morning tweets, Manafort assumed both roles. First, Manafort was a bad hombre the government failed to warn the President about.

But two hours later, Manafort played victim to the same government Trump called out in his prior tweet. In the second daily mention for Manafort, Trump states:

Looking back on history, who was treated worse, Alfonse[sic] Capone, legendary mob boss, killer and “Public Enemy Number One,” or Paul Manafort, political operative & Reagan/Dole darling, now serving solitary confinement - although convicted of nothing? Where is the Russian Collusion?"

The second tweet had people perplexed. Several questioned why the President would want to associate the name of a man he's known for decades with a notorious criminal, even if it was to show Manafort in a positive light.

and now to argue for the good character and sterling reputation of my indicted former campaign chairman by comparin… https://t.co/XVFKNJAWwN
— Dave Itzkoff (@Dave Itzkoff) 1533138403.0

"This is worse than what they did to Al Capone!" is a GREAT way not to sound like you're a character on The Sopranos https://t.co/TJWEfNLW4J
— James Poniewozik (@James Poniewozik) 1533138232.0

"I'm simply comparing the man who ran my presidential campaign to a serial murderer who drenched the country in blood for years on end."
— Oliver Willis (@Oliver Willis) 1533138119.0

While others were surprised to find out why Alphonse "Al" Capone was trending on social media.

But one Twitter user put forward a pretty solid theory for the unusual comparison.

Still others in the Twittersphere decided to provide some facts on Al Capone for the President's perusal.

Maybe then Trump could discern the differences between Capone and Manafort —or Capone and Trump.

Al Capone was imprisoned at Alcatraz and was stabbed in the prison laundry. https://t.co/jB8kfM6fi2
— Renato Mariotti (@Renato Mariotti) 1533138314.0

@realDonaldTrump Capone was sent to Alcatraz lost his mind in solitary and died at 48 from syphilis. You should try reading sometime.
— Ross Gerber (@Ross Gerber) 1533138475.0

While some provided visual aids.

And one decided to clarify how Manafort, or rather the Russia investigation, compared to other recent investigations in Washington DC.

But others were still baffled or delighted by the President's tweet.

Trump and Manafort first became acquainted back in 1980 when Trump hired the Washington DC lobbying firm owned by Manafort, Roger Stone and Charles Black to represent his interests. Trump remained a client until the early 1990s.

After the FBI raid on Manafort's home in July 2017 though, the President began to distance himself, but still vouched for him. Trump stated:

But I’ve always known him to be a good man."