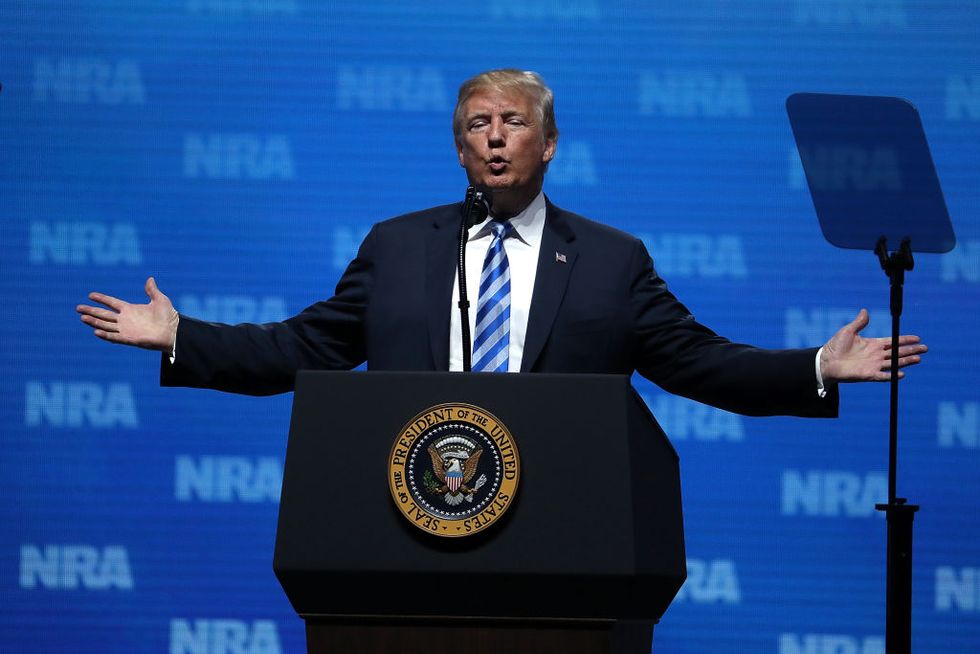 President Donald Trump is again alarming citizens and lawmakers alike with one of his latest tweets. This time, the president tweeted that he's consulted the NRA about blocking the distributions of blueprints for 3-D printed guns.

This is especially notable because the Trump administration recently undid government restrictions on distributing the blueprints online. Though the federal government had been fighting to maintain the ban in court, it changed its tune and reached a settlement allowing the plaintiff to post plans for 3-D printed guns. Despite his own administration being instrumental in allowing the sale of the plans, Trump seemed to question the sale, assuring that he'd already consulted the National Rifle Association.

The 3-D printing of guns poses a widespread threat to the public because anyone with access to a 3-D printer can distribute guns with no regulation. The guns also don't have serial numbers, making them virtually impossible to trace. Because the metal firing ring is the only part that isn't plastic, they're easy to slip through a metal detector as well.

The plaintiff with whom the Trump administration settled the case allowing the sale of the prints was Cody Wilson, who's posted demonstrations of the 3-D printed guns manufactured by his company, Defense Distributed.

Lawmakers and gun safety organizations were aghast that Trump seemed unaware his administration helped allow Defense Distributed to sell plans for 3-D printed guns, and by the fact that Trump was consulting a virulently pro-gun organization on how to proceed with the policy.

Amazing how proud he is to advertise that the NRA calls all the shots. Stakes are clear this November. If you wan… https://t.co/jm0HSWiDTM
— Chris Murphy (@Chris Murphy) 1533042182.0

Celebrities and concerned citizens weighed in as well, without mincing words.

While many are shocked that such a reckless policy could ever gain so much ground, virtually no one is surprised that Trump is consulting the NRA. There's a good reason for that.

In 2016, the National Rifle Association spent over 30 million dollars on Trump's election alone. That's more than the organization spent on all races (not just presidential) in 2008 and 2012 combined.

But we have news that you’ve been waiting for for a long time:  The eight-year assault on your Second Amendment freedoms has come to a crashing end.  You have a true friend and champion in the White House.

During the 2016 campaign, Trump also encouraged gun violence against his opponent Hillary Clinton:

If she gets to pick her judges, nothing you can do, folks Although the Second Amendment people — maybe there is, I don’t know.

Trump has ceaselessly made his devotion to the NRA apparent, but many still find it shocking that he's willing to support a policy that could easily undermine every gun safety law in place and exacerbate the already stratospheric amount of mass shootings occurring in the United States.