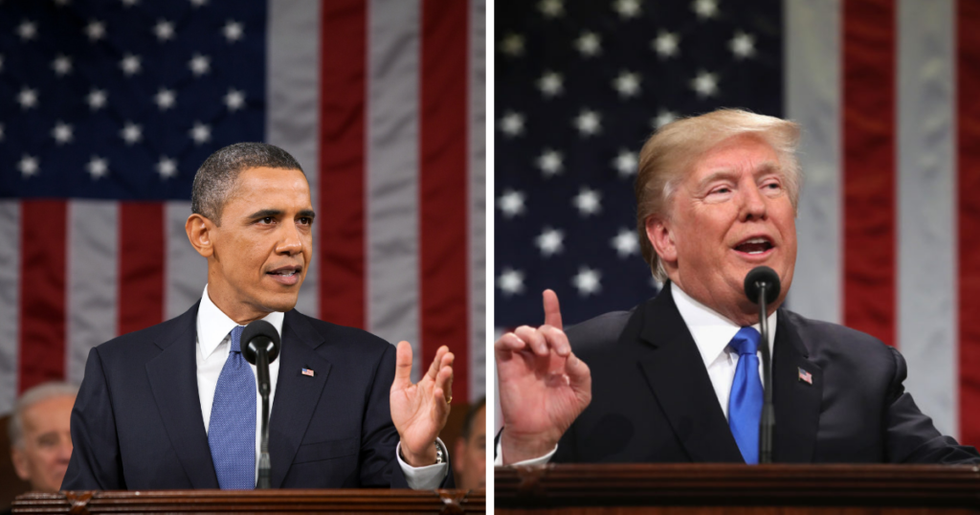 Further proof that there is always a tweet of Donald Trump criticizing someone else—for something he does or does not do—emerged after the President posted racist attacks against Representative Elijah Cummings (D-MD) and Baltimore, Maryland. Private citizen Trump was full of advice for then-President Barack Obama, but people wonder why—now that Trump is President—he never takes his own counsel.

To remind the President of what he said Obama needed to do, people on Twitter shared posts from 2015 that addressed the role of the President in regards to problems in Baltimore.

Funny how, when there was a different president, Trump saw Baltimore's perceived problems as a sign of presidential… https://t.co/TOi9XsSOdR
— Robert Maguire (@Robert Maguire) 1564312805.0

Here are some of those Trump tweets that did not age well.

Our great African American President hasn't exactly had a positive impact on the thugs who are so happily and openly destroying Baltimore!
— Donald J. Trump (@Donald J. Trump) 1430195892.0

Our country has to come together. We have to start working with, and really liking, each other. The whole world is watching Baltimore.
— Donald J. Trump (@Donald J. Trump) 1430221831.0

President Trump took office in January 2017, yet Baltimore—where his son-in-law Jared Kushner's family company owns numerous rental properties described as mismanaged slums—still has not been fixed fast by the President.

Based on Trump's latest Twitter posts about Baltimore—where he said "no human being" would live echoing racist rhetoric Michael Cohen claimed Trump often used—the President bears no responsibility. Instead, Democratic Representative Elijah Cummings is solely responsible for curing any issues created by lack of funding for affordable housing,  rampant abuse by slumlords and economic disparity.

The phrase "always a tweet" grew out of such apparent hypocrisy in the Donald Trump Twitter candidate versus Trump the Twitter President. There are so many cases of online Trump hypocrisy that Twitter created the subReddit TrumpCriticizesTrump dedicated to finding examples of:

"For every Trump action there is a Trump tweet criticizing that action."

So the President's latest apparent memory lapse came as little surprise to people.

@RobertMaguire_ @comboverwhelmed Dotard's First Law of Deflection : For every Trump tweet there is an equal and op… https://t.co/0ZNSlERres
— btnben (@btnben) 1564338059.0

@RobertMaguire_ @KevinMKruse Hundreds of examples are available. Trump is what he is. I don’t need any more proof.… https://t.co/KSo2fmmhD8
— Barbara Holton (@Barbara Holton) 1564322751.0

Although some reminded Trump of other tweets he made.

@RobertMaguire_ Hes criticizing our country, saying it's going to hell. Since he is complaining about it, he should leave
— Rob (@Rob) 1564312987.0

@RobertMaguire_ @KevinMKruse Shouldn't the conditions of cities fall under the purview of the Department of Housing… https://t.co/EGqcDxXd1Z
— Pat (@Pat) 1564323432.0

Trump's Twitter posts that caused people to label them racist were shared after Representative Cummings performed the duties assigned to him as chair of the House Oversight Committee.

Elijah Cummings spends all of his time trying to hurt innocent people through “Oversight.” He does NOTHING for his… https://t.co/jt4YsoX6Gr
— Donald J. Trump (@Donald J. Trump) 1564263347.0

There is nothing racist in stating plainly what most people already know, that Elijah Cummings has done a terrible… https://t.co/EJMU0RvPu0
— Donald J. Trump (@Donald J. Trump) 1564338909.0

Near the end of his tirade, Trump began referring to Representative Cummings as racist.

If racist Elijah Cummings would focus more of his energy on helping the good people of his district, and Baltimore… https://t.co/Qco3AGoiwI
— Donald J. Trump (@Donald J. Trump) 1564341500.0

Then to fend off any future criticism, Trump decided to call Reverend Al Sharpton a conman who "Hates Whites & Cops!"

Democrats admonished the President for his latest round of White supremacist rhetoric. Members of the GOP remained largely mum.

Tired of the many proven lies? This shirt available here can let the world know.