As Hurricane Michael Bears Down on Florida, Donald Trump Refused to Cancel His Campaign Rally, and, Yes, There's an Old Trump Tweet For That 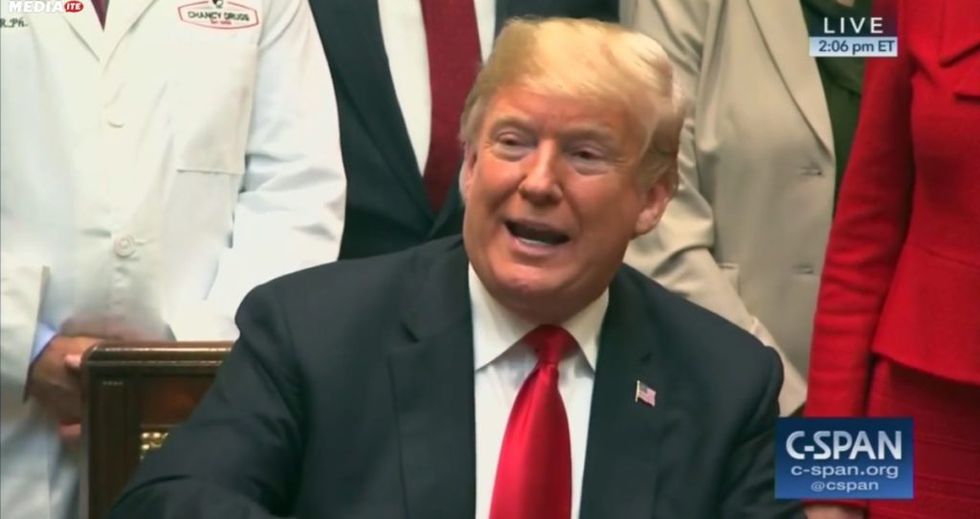 President Donald Trump speaks to reporters after an official signing ceremony in the Oval Office on October 10, 2018. (C-SPAN/YouTube)

On Wednesday, while speaking with reporters in the Oval Office about Hurricane Michael—with Department of Homeland Security Secretary Kirstjen Nielsen and FEMA head Brock Long in attendance—President Donald Trump was asked about his rally in Erie, Pennsylvania scheduled for Wednesday night.

At the time, Trump said no decision had been made about his second rally in two nights. Tuesday night, Trump held a rally in Iowa.

The President speculated if it was better to stay in Washington and monitor the situation with Hurricane Michael—which he referred to as "one of the biggest storms ever to hit our country"—making landfall in the Florida panhandle or go to Pennsylvania to speak in front of his supporters.

But Trump kept stating how long people in Pennsylvania had waited in line, with many coming the night before, to see him. It would be unfair to them to cancel, the President kept saying leading many to speculate he intended to go.

But by a bill signing later that afternoon, Trump decided not disappointing his fans took precedence over staying at the White House command center to monitor the storm or government response. When asked if it was the wrong time to leave for a rally in a non-presidential election year, the President responded:

"I hear they have thousands of people lined up, and so we are in a little bit of a quagmire. I don’t want to disappoint people."

"They’ve gotten there—some people were staying, they got there last night. I believe it starts at about 7:00… So we’ll probably go, ’cause what are you going to do?"

"Tell thousands of people they’ve been waiting there all night that we’re not coming? That’s not fair either."

Then the President tweeted he left the White House for his rally.

Departing the @WhiteHouse for Erie, Pennsylvania. I cannot disappoint the thousands of people that are there - and… https://t.co/f63EzMSJvE
— Donald J. Trump (@Donald J. Trump) 1539201143.0

But back in 2012, then businessman Donald Trump had a completely different opinion on Twitter about a President leaving the White House during a storm, even though 2012 was a Presidential election year. Because there is always a tweet from Donald Trump to criticize something President Trump chooses to do.

Let’s be honest, if Obama thought he could get away with campaigning during the storm, then he would have been in Ohio on Monday.
— Donald J. Trump (@Donald J. Trump) 1351619499.0

But those weren't the only tweets people found where Donald Trump criticized President Barack Obama for considering campaigning during a major weather event—which Obama did not do—or its aftermath.

The Twitter sleuths at Reddit's subReddit "Trump Criticizes Trump: A Portrait of Presidential Hypocrisy. For every Trump action there is a Trump tweet criticizing that action." found two more, one from 2012 and another from 2011.

In 2012, Trump stated it was too early after Hurricane Sandy for Obama to make a campaign appearance.

The appearance Obama made was on November 5 while the election that year occurred on November 6, the date Trump posted his criticism. Hurricane Sandy hit New York and New Jersey—the two areas Trump mentioned—seven days earlier on October 29, 2012.

And in October 2011, Trump complained about Obama campaigning too often for the 2012 election.

Does @BarackObama ever work? He is constantly campaigning and fundraising--on both the taxpayer's dime and time---not fair!
— Donald J. Trump (@Donald J. Trump) 1319566237.0

President Trump held a rally in Kansas on Saturday, another in Iowa on Tuesday, one in Pennsylvania on Wednesday with another in Ohio Friday and in Kentucky Saturday. The next presidential election is in 2020.

Reactions to Trump's choice to leave the White House rather than monitor Hurricane Michael were as critical as his own for something Obama did not do. And a few claimed Trump paid people to be at his rallies, something the President says about people who protest against him or the GOP.

@realDonaldTrump @WhiteHouse Translation: ‘I’m a malignant narcissist who craves the attention & love I get at my K… https://t.co/pYyp7KKBnb
— Andy Ostroy (@Andy Ostroy) 1539201733.0

While Trump doesn't face the ballot box again until 2020, midterm elections are slated for Tuesday, November 6, 2018.