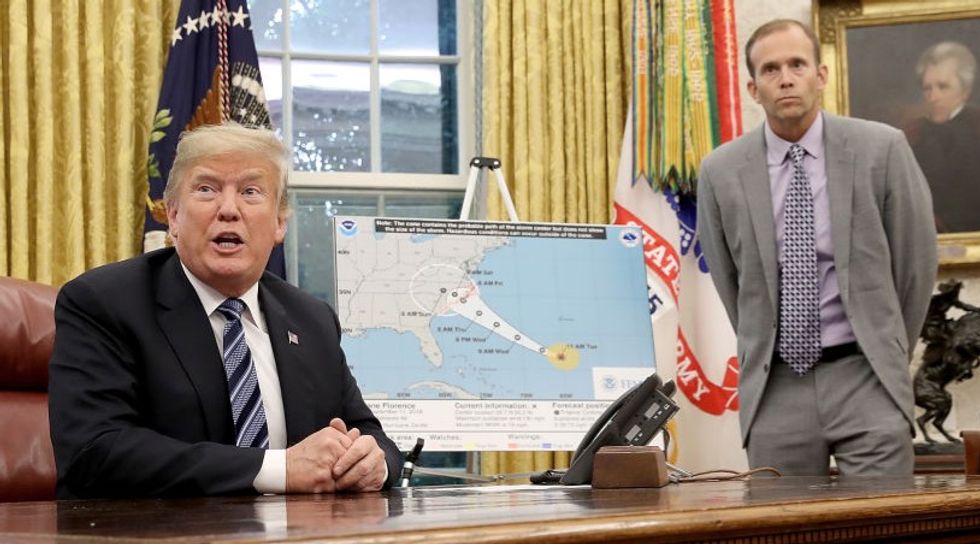 Both sites feature the premise that there is always a Trump tweet to relate to any current event or presidential tweet.

The President's current flurry of tweets seek to defend his administration's performance in response to Hurricane Maria hitting Puerto Rico in 2017—which Trump characterized as "one of the best jobs ever done." A year after Maria, parts of Puerto Rico still remain without reliable electricity or safe drinking water.

The Twitter sleuths went on the hunt and quickly found a Trump tweet—several actually—criticizing hurricane recovery efforts by his predecessor. On November 6, 2012, Trump posted:

"The federal gov. has handled Sandy worse than Katrina. There is no excuse why people don't have electricity or fuel yet."

The federal gov. has handled Sandy worse than Katrina. There is no excuse why people don't have electricity or fuel yet.
— Donald J. Trump (@Donald J. Trump) 1352236298.0

Trump referred to citizens in his area—New York and New Jersey. But was there any truth to his claim?

Hurricanes Katrina, Rita and Wilma in 2005 and Ike in 2008 resulted in longer outages in Louisiana, Texas, Mississippi and Florida. The longest stretch to reach 95 percent power restoration since 2004 belonged to Louisiana after Hurricane Katrina—where utilities hit 75 percent after 23 days before Hurricane Rita hit.

But Trump's dig at the lack of power for people in his home area was not the only shot he took at President Barack Obama during Sandy's aftermath. The Twitter sleuths at the subReddit "Trump Criticizes Trump" found several others.

The subReddit's description reads "Trump Criticizes Trump: A Portrait of Presidential Hypocrisy. For every Trump action there is a Trump tweet criticizing that action." Regarding hurricanes and their aftermath, Trump stated:

Hurricane is good luck for Obama again- he will buy the election by handing out billions of dollars.
— Donald J. Trump (@Donald J. Trump) 1351605910.0

Interestingly, the hurricane may now be a disaster for Obama's reelection because of his grandstanding.
— Donald J. Trump (@Donald J. Trump) 1351876784.0

How about President Obama fixing the gasoline situation instead of taking photo ops in the destruction.
— Donald J. Trump (@Donald J. Trump) 1351878408.0

President Trump took heavy criticism for his own purported grandstanding and photo ops in Puerto Rico after Hurricane Maria as shown in the following reactions on his recent Twitter posts or in reaction to his public statements.

People still bring up the paper towels every time the President mentions Puerto Rico. Or even the word hurricane.

In addition to criticizing Obama about "grandstanding" and taking photos, Trump also took issue with Obama appearing with New Jersey and New York native sons Bruce Springsteen and Shawn Carter, aka Jay-Z, in the Sandy aftermath.

According to Trump of 2012, Trump of 2017 should not have continued campaigning or making public appearances or posing for photos for 328 days while power in Puerto Rico needed to be restored.

Overall, the President currently garners heavy, often brutal, pushback on his claims of successfully handling disaster recovery in Puerto Rico and preparedness for Hurricane Florence as a glance through his Twitter feed shows.

And while many referred the President to his past statements or actions regarding hurricanes, several Twitter users posted another Trump tweet from 2013.