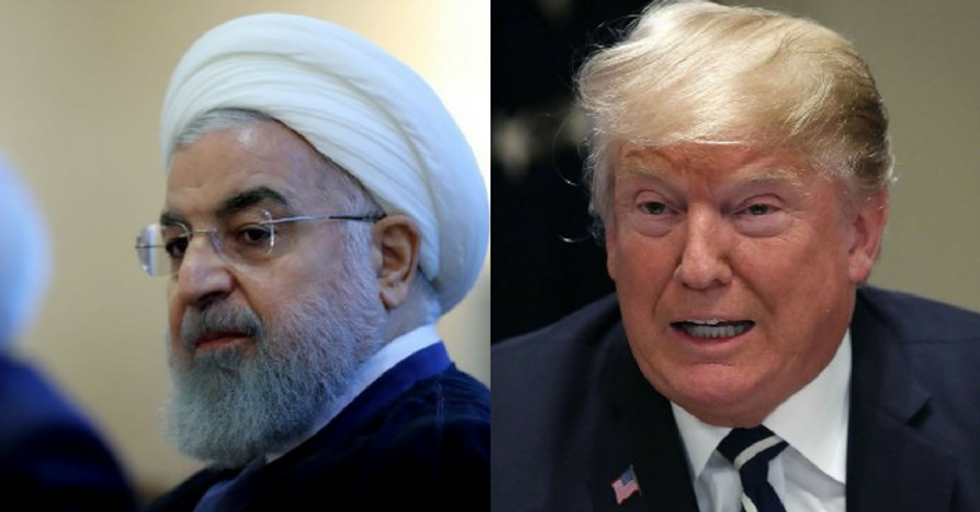 In the latest example of diplomacy via Twitter meltdown, President Donald Trump addressed the President of Iran, Hassan Rouhani, with an all caps threat Sunday night.

To Iranian President Rouhani: NEVER, EVER THREATEN THE UNITED STATES AGAIN OR YOU WILL SUFFER CONSEQUENCES THE LIKES OF WHICH FEW THROUGHOUT HISTORY HAVE EVER SUFFERED BEFORE."

WE ARE NO LONGER A COUNTRY THAT WILL STAND FOR YOUR DEMENTED WORDS OF VIOLENCE & DEATH. BE CAUTIOUS!"

"Trump's statements against Iran are psychological warfare. He is not in a position to act against Iran," said General Gholam Hossein Gheypour, head of Iran's Basij militia. He added the United States “won’t dare” take military action against Iran, whose missiles can hit most of the Middle East according to the same IRNA report. General Gheypour also stated:

We will not give up on our revolutionary values and beliefs and we will stand against imperialists and tyrants, and those few who have fallen for this psychological warfare of this crazy president should know that he wishes the destruction of all of us. Our people and our armed forces will stand up to enemies and will not yield."

Many pointed out, in response to Trump's Twitter post, the United States no longer has a leader who won't rise and react to every baited barb. But measured responses from other leaders drew prior criticism from Trump.

While previous presidents analysed their national security advisers reports and responded diplomatically or militarily based on the need, Trump now takes to Twitter to taunt foreign leaders, trade barbs with domestic foes and attack all who criticize him in any way.

The latest tit-for-tat began when Trump's Secretary of State Mike Pompeo spoke extensively about Iran in a speech Sunday at the Ronald Reagan Presidential Library in California, and subtly encouraged the Iranian people currently protesting in the Middle Eastern country to rise up against their government, stating,

The Trump administration rolls out new sanctions against Iran in August and urged allies to stop buying any Iranian oil by November.

Rouhani previously criticized Trump for threatening sanctions, moving the US embassy to Jerusalem in Israel and banning travel to the US from only certain Muslim-majority countries.

Many point to Trump's Twitter response to Rouhani's statement as excessive and unnecessary.

In May, Trump famously pulled the United States out of the 2015 internationally negotiated Iran nuclear accord designed to keep the Middle Eastern country from developing nuclear weapons. At the time, Britain, France, Germany, Russia and China publicly urged Trump not to.

On Sunday, Pompeo provoked Iran, Rouhani warned the United States to stop and the situation devolved into a schoolyard session of traded taunts with Trump's tweet.

And many wonder how far the jabs will go.

The weekend was full of Trump Twitter threats and criticism for a number of people and entities with one very notable exception: Russian President Vladimir Putin. Russia, according to Trump's Director of National Intelligence, Dan Coats, actually poses a current credible immediate threat to the United States.

Since Sunday, Trump has criticized the following on Twitter: The Department of Justice The FBI Hillary Clinton Be… https://t.co/l8ScJmord4
— Keith Boykin (@Keith Boykin) 1532352843.0

Which, some speculate, is the impetus of the Trump tweeted threat to Rouhani. According to Iranian commentator Foaz Izadi, in a statement to England's newspaper The Guardian,

This is designed to address his base in the US. You need to remember that he is facing elections in November and if Democrats gain power in the US congress, they will impeach him."

"Elections are going to be quite important for him," Izadi continued, "and he is using rhetoric that is suitable for the base that voted for him, using everything in caps and looking tough. In reality, remember he used the same type of rhetoric against North Korea and in the last few months, he has given a lot of things that North Koreans wanted from the US."

North Korean policy has been tough on rhetoric and quite weak in substance when it comes to US interests."

President Trump continues to face harsh criticism for his stance —maybe he would think they did it or he wouldn't— on Russian interference in the 2016 presidential election. Critics and rivals as well as some former allies said the United States President was too soft on his Russian counterpart.

Analysts and the public alike, according to a recent poll, view Putin as the clear winner after his closed door meeting with Trump in Helsinki, Finland. The same is also being said of the meeting between Trump and North Korean leader Kim Jong Un. And if Putin and Kim won, then Trump lost.

Critics repeatedly referred to how weak Trump appeared in relation to Putin and Kim.

In a supposed show of his strength, Trump took a very hard line in recent months, often on Twitter, with multiple safe targets: G7, Canada, NATO, the United Kingdom and even Queen Elizabeth II.

Now Trump publicly demonstrated his strength through his all caps threat directed at Iran and addressed to President Hassan Rouhani. The fallout of that choice remains to be seen.