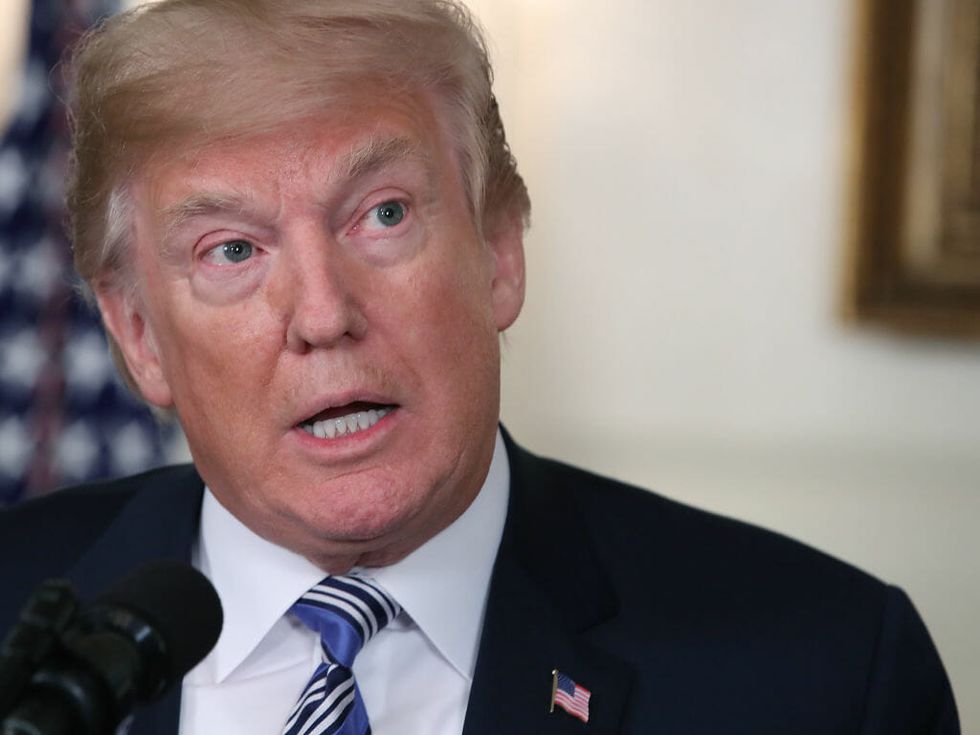 WASHINGTON, DC - MARCH 23: U.S. President Donald Trump speaks to the press about the $1.3 trillion spending bill passed by Congress early Friday, in the Diplomatic Room of the White House on March 23, 2018 in Washington, DC. After threatening to veto the legislation earlier today, President Trump announced he had signed the bill, avoiding a government shutdown. (Mark Wilson/Getty Images)

President Donald Trump's approval rating has dipped once again, to 39 percent from 42 percent in December, according to March's CNBC All-America Economic Survey. These results are within the 3.5 percentage point margin of error of the poll, but it's also within 3 points of every poll taken by CNBC during Trump's presidency. The survey reports that Trump's economic approval rating also dipped, to 45 percent from his all-time of 47 percent in December, but it's "within 1 point of his average during his presidency."

But it could be as simple as the fact that the president's much-touted tax cuts have "not been felt, at least not yet."

According to the CNBC poll:

Just 32 percent of the public reports having more take home pay because of the tax cuts, including only 48 percent of Trump supporters and 35 percent of the middle class. More than half say they see no change in their paychecks and 16 percent are unsure. It could be that more time is needed for people to notice the change. It could also be that the tax cut provided too small a break to be meaningful to many Americans.

Of the 32 percent who report seeing more take-home pay in their paychecks, the survey notes, only 38 percent say the extra pay helps their financial situation "a great deal" or "a fair amount, while 40 percent say it helps some or just a little, and 22 percent say "it does not help much at all."

The president's decision to impose tariffs on steel and aluminum imports isn't helping him either:

To be sure, 36 percent of Americans say they don't have an opinion, but 35 percent oppose the tariffs and 29 percent support them. Just 28 percent say the tariffs would be good for the overall economy, and 44 percent fear they will raise prices for consumers.

There's also evidence that American attitudes toward Canada, Mexico and China are actually improving and CNBC notes that fewer Americans "see them as an economic threat" than in its previous surveys. For example, 24 percent of those surveyed believe Canada represents more of an economic threat than an economic opportunity, and that number is down from 32 percent when the question was last asked in March 2016.

Republicans appear to have noticed the seeming indifference to the president's tax cuts, because they did not make it the central issue of a closely watched special House election in Pennsylvania's 18th Congressional District. Polling in the district in the days before Democrat Conor Lamb bested Republican Rick Saccone in a district Trump won by a significant margin in 2016 showed that support for tax reform actually dwindled.

For the weeks of Feb. 4 and Feb. 11, roughly two-thirds of the broadcast television ads from Saccone’s campaign, the Congressional Leadership Fund super PAC and the National Republican Congressional Committee mentioned taxes, according to a POLITICO analysis of data from Advertising Analytics. For the week of Feb. 18, that dropped to 36 percent, and to 14 percent the week after. Since the beginning of March, tax ads have been essentially nonexistent. Only two are on the air now — a TV ad from America First Action, a pro-President Donald Trump super PAC that briefly mentions the tax law, and a radio ad from a progressive group attacking Saccone for supporting the law.

The indication? That Republicans need to reconfigure their message for the midterm elections. The party saw the passage of their highly contentious tax plan as their major legislative victory for 2017, touting it as a victory for citizens' paychecks, but as a POLITICO/Morning Consult poll also notes, "few voters report seeing more money in their paychecks this year as a result of changes to the tax code."

Why though are the president's approval numbers so low if roughly half of all Americans judge the economy as "good" or "excellent," 38 percent expect the economy to improve in the next year (the second highest number since the Great Recession), and 41 percent of homeowners expect the value of their homes to increase in the next year (the highest number since 2007)?

Micah Roberts, the Republican pollster for the survey for Public Opinion Strategies, believes that the president's numbers are rather stable despite being "underpinned by strong partisan, gender, and generational divides":

"Trump's job approval numbers are very stable, underpinned by strong partisan, gender, and generational divides," he said. "Whatever else we might say about the historical significance of how low his overall approval is, it is also worth noting how historically stable this number has been over an otherwise very politically turbulent year."

However, Jay Campbell, the Democratic pollster with Hart Research, says it's more than just the economy that's bringing down the president's ratings:

Approval of any president are the sum of the nation's parts, and the economy is just one of those parts. Our strong economy is unarguably working to President Trump's benefit, keeping his approval numbers afloat. But there are multiple other factors that, at the same time, are pulling him down.