Reporter Just Called Out Trump's Real Strategy Behind His Tax Cuts For the Wealthy, and It Sounds All Too Familiar 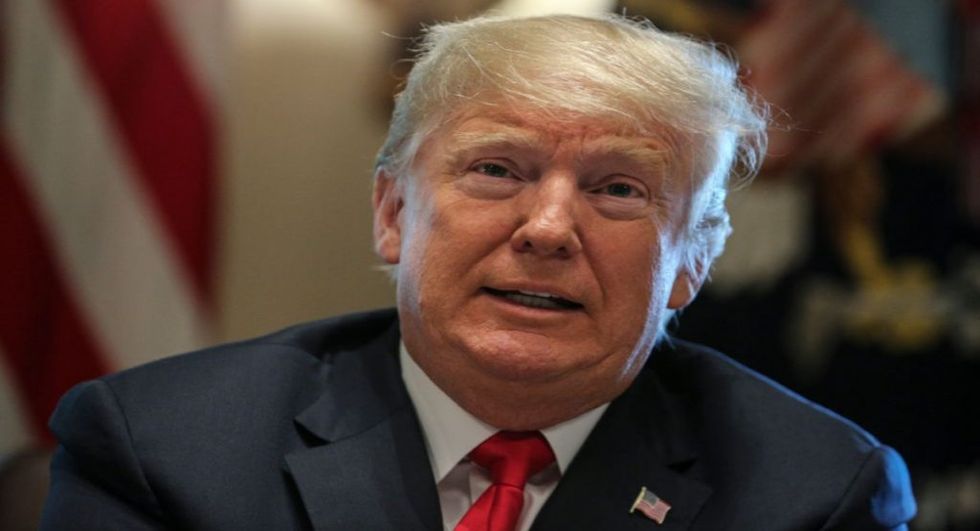 US President Donald Trump at the White House on August 16, 2018 in Washington, DC. (Photo by Oliver Contreras-Pool/Getty Images)

As predicted by economists and the bipartisan Congressional Budget Office (CBO) prior to their implementation, the Republican backed Trump tax cuts for the wealthiest citizens are on target to balloon the federal deficit to levels never seen before in United States history—both in sheer amount and in comparison to the gross domestic product.

Now some GOP members of Congress and President Donald Trump look to cut social safety-net programs to close the gap.

Programs like Social Security and Medicare—financed by deductions from worker's paychecks—and Medicaid and SNAP—providing healthcare and food for the poorest citizens—along with other programs provide a social safety-net to keep people from starving, becoming homeless, freezing during the winter or dying from untreated health issues.

But New York Times writer Nick Confessore contends the longstanding GOP desire to cut or eliminate social programs that help the poor, created the tax cuts for the wealthy and not the other way around.

Responding to a tweet by CNBC political editor Mike Calia who posted:

"GOP Rep. Steve Stivers, a budget hawk when Obama was president, voted for Trump's deficit-expanding tax cuts. Now, in an interview with @JohnJHarwood, he's advocating for cuts to Social Security and Medicare as a way to trim the deficit."

The GOP received the same indictment when they cut veterans benefits and programs. Everyone knew the Trump tax cuts for the wealthiest individuals and corporations would not benefit anyone but the people receiving the tax cuts.

But to avoid the political suicide of making deep cuts to veterans programs and Social Security and Medicare requires a financial crisis. Create a huge deficit then cut programs because there is "no funding" and "no choice."

People on Twitter agreed with Confessore's assessment of why the GOP and Trump pushed their tax cuts knowing it would not help the middle or lower classes or the economy as the following comments show.

People labeled the GOP and Trump tax cuts as a deliberate sabotage to manufacture a financial crisis.

Most pointed out that this strategy is nothing new.

@nickconfessore @JohnJHarwood The problem is that cutting Social Security would not lower the deficit. Their funds… https://t.co/fdXc8Yi1d6
— Gudrun Hreinsson (@Gudrun Hreinsson) 1534792992.0

@nickconfessore @JohnJHarwood This after I spent 40 years in the workforce paying into social security only to let… https://t.co/qAqKKNFCVo
— SoniG (@SoniG) 1534792404.0

@nickconfessore @JohnJHarwood Daniel Patrick Moynihan identified this as the strategy a generation ago. Still the same
— Dennis Yedwab (@Dennis Yedwab) 1534792323.0

@nickconfessore @JohnJHarwood Things over people have been the GOP game plan since Reagan. Mr. Trump is executing… https://t.co/k1IumcwQ3u
— KdF (@KdF) 1534792306.0

@Michael_Calia @JohnJHarwood is anyone ever going to point out to these clowns that SS and Medicare have their own… https://t.co/ZyGuNyIILv
— Dexter Gresh (@Dexter Gresh) 1534781638.0