We Now Know the True Cost of the Trump Tax Cuts, and Yep, They Were a Total Con Job

Contrary to what was promised by Republicans. 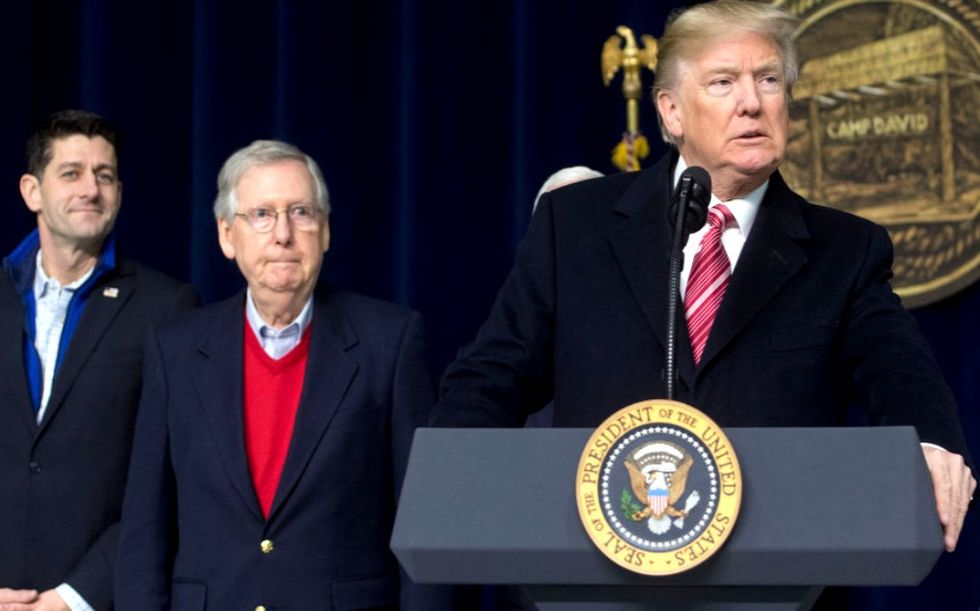 In 1946, the United States was recovering from World War II. Many products that fueled the American economy, redirected toward the war effort, had yet to recover in a post-war world. And the war had been expensive.

It's understandable then, that 1946 produced a record 106 percent federal debt to gross domestic product (GDP) ratio. That record has stood, as have those of the years immediately after WWII, for over 50 years.

In 2018, we're not involved in a world war. We aren't recovering from a world war that redirected vast amounts of American industry and workers toward production of materials for a war effort.

But in 2018, we're on track to beat those post WWII debt records.

That projection comes from the Congressional Budget Office (CBO).

The CBO, a nonpartisan resource for budget and economic information, reports by the end of 2018, the USA's debt to GDP, a measurement of the US economy, will reach 78 percent. The last time our debt reached that level was 1950 during the recovery from WWII.

But why, when we're not in a war recovery cycle, would our debts soar so high, eventually eclipsing our economic growth?

Remember the Republican tax plan that President Donald Trump and GOP leaders Paul Ryan and Mitch McConnell pushed? Recall the GOP tax plan, giving tax cuts to corporations and the highest income brackets, that would pay for itself and bring industry back to the United States and create jobs?

Turns out, it was not as advertised according to the many financial analyses done before and after Trump's tax cuts took affect. Turns out the dire warnings about what those tax cuts for the wealthiest and most profitable would do, they actually are doing.

The economy has continued to climb at the levels projected during the administration of President Barack Obama, where the deficit shrank again after growing under President George W. Bush who took over a shrunken deficit courtesy of President Bill Clinton.

In fact, despite the fiscally conservative rhetoric of Republicans, their watch produced the largest deficit growths while Democratic presidents have shrunk the deficit, going back to President Ronald Reagan.

Unfortunately the economic upturn inherited from Obama can't outdistance the debts being created by the current GOP led White House and Congress. And the trade wars Trump started with China, the EU, Canada and Mexico are not projected to help US economic growth either.

So the Trump slump is no great surprise, since the GOP currently holds the White House and both houses of Congress. But the record breaking debt is extreme even for a Republican presidency.

Some are wondering if it's due to Trump's own business style of racking up debts then walking away from them through bankruptcy proceedings. Unfortunately that business model doesn't work for a country.

I remember when this would have been a front-page story, with lawmakers demanding action https://t.co/311eoytSzU
— Glenn Kessler (@Glenn Kessler) 1530023269.0

Remember when Trump and the GOP leadership said the tax cuts would pay for themselves? Today the CBO announced that… https://t.co/4LsGS0LVjo
— Maurice Ross (@Maurice Ross) 1530065833.0

November is still over 4 months away. The GOP can only hope voters have short memories when they campaign on issues of the economy.