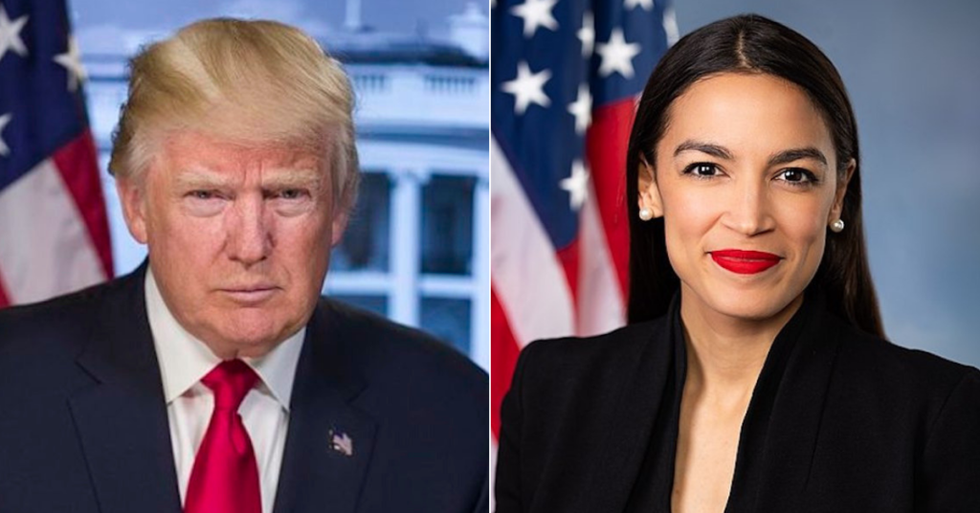 At a town hall meeting, Ocasio-Cortez argued against the privatization of veteran's health care, saying that the U.S. Department of Veterans Affairs provides "some of the highest quality care."

"While Rep. Ocasio-Cortez and I have VA medical facilities in and near our districts with great quality ratings, not all veterans are so lucky....It is evident that she paid little attention to the scandalous treatment of veterans that occurred several years ago by some in the very agency created to serve them," he said.

Surprisingly, Donald Trump sided with Ocasio-Cortez on the matter. However, they agreed for different reasons.

While AOC stood against the privatization of veteran care in opposition to greed from the pharmaceutical industry, Trump saw a chance to brag.

@realDonaldTrump Remember when you took veteran funding and instead used it to pay for caging children at the border?
— Treason Stickers (@Treason Stickers) 1556125058.0

@realDonaldTrump Come to Jacksonville to the VA canter at Southpoint and speak with my doctor on the Orange team. S… https://t.co/rWLWnYpJ0e
— Robert Wasdin (@Robert Wasdin) 1556128606.0

@realDonaldTrump System still broken. Husband is a vet and has to deal with appts pushed out weeks instead of days… https://t.co/og1tjoAvbG
— Darlene Soliz (@Darlene Soliz) 1556129468.0

Under the current Veterans Choice Program, eligible veterans can receive health care from a community provider instead of waiting for care at a VA facility. Ocasio-Cortez lauded the program, likening it to her Medicaid for all proposal in the Green New Deal.

We invite @AOC to a polite conversation about just how bad the VA healthcare system, and some of its employees, can… https://t.co/BRsgFwkSSN
— Coming Home Well (@Coming Home Well) 1556063955.0

"Problems and inconsistencies like that are the definition of a system that needs fixing," Roe shot back in a statement. "I am baffled as to how Rep. Ocasio-Cortez fails to see that."

.@AOC & every politician should have to get their healthcare from the #VA. All the healthcare issues that veterans… https://t.co/3vI2oLwilz
— Sean Parnell (@Sean Parnell) 1556021992.0

Trump did sign a bill to continue the VCA program in 2018, which he has conflated with signing initial bill on several occasions.

"If we really want to fix the VA so badly, let’s start hiring, and fill up some of those 49,000 [staff] vacancies," Ocasio-Cortez said. Pretty sure Trump didn't listen to that part of her speech before he sided with her about veteran's care.