The power of his rhetoric. 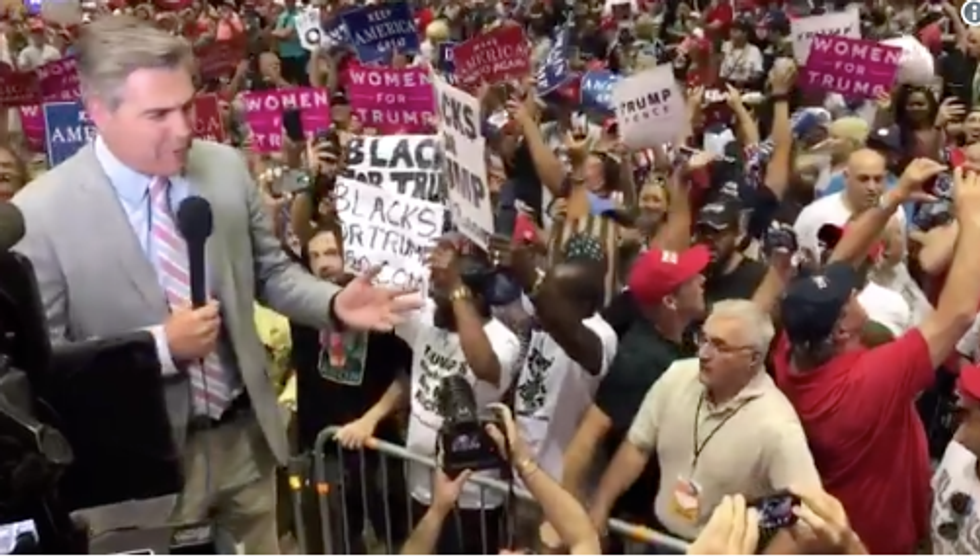 President Donald Trump held a rally in Tampa, Florida Tuesday night and his supporters demonstrated the damage the president's relentless attacks on the free press have done.

Thousands of Trump fans were lined up all day in the steamy Florida sun, eager to participate in what is sure to be an echo chamber of falsehoods and attacks on the media.

The crowd's behavior toward one veteran journalist offered a dark preview of what would surely come.

CNN's Jim Acosta was jeered by Trump supporters as he was standing on a podium reporting about the event.

Rallying cries of boos, people shouting "traitor," and "you're a liar" were lobbed at Acosta.

Then the crowd began chanting, "CNN sucks!" at Acosta as he struggled to hear his own words.

The president hadn't even arrived yet, and social media was blowing up with people wondering why the media continues to give Trump and his supporters airtime.

Thankfully, the Internet has Acosta's back.

@Kris_Sacrebleu @Acosta @realDonaldTrump @Acosta is Everyman in America right not who is asking for the truth about… https://t.co/G6RcAdd3TZ
— Thirtysixmiles (@Thirtysixmiles) 1533073296.0

Trump has repeatedly referred to the media as "fake news" and "the real enemy of the people."

Trump's onslaught of attacks on the media all have one thing in common: it's "fake news" when coverage is negative.

Frankly, that's Trump's own fault and one can only imagine how much worse his attacks may get as the president's litany of scandals begin to close in on him.

When five people were killed in an Annapolis, Maryland newsroom last month in a targeted massacre of Capital Gazette staff, Trump feigned sympathy for the victims and their families...

Prior to departing Wisconsin, I was briefed on the shooting at Capital Gazette in Annapolis, Maryland. My thoughts… https://t.co/DUhjdWWxBP
— Donald J. Trump (@Donald J. Trump) 1530218995.0

...and then less than a week later returned to his "fake news" diatribe. What makes this particular tweet even richer is that North Korea has been ramping up its production of intercontinental ballistic missiles capable of reaching the United States. We know where the "fake news" is coming from, Mr. President.

Thus, concerns over the safety of members of the press abounded on Twitter.

"This is DANGEROUS," one user responded.

If @Acosta or some other member of the press gets hurt, #MAGA MORON leader, @realDonaldTrump will have BLOOD on his… https://t.co/JlCY6Bt8cZ
— ᎠᏌNᎬᎷYᎢᎻᎪNᏩ™️ (@ᎠᏌNᎬᎷYᎢᎻᎪNᏩ™️) 1533072439.0

What the president is doing amounts to an existential and institutional threat to democracy. The media would be wise to combat Trump's rhetoric by ceasing to give him a platform on which he can further erode our sacred freedom of the press.

Donald Trumpwar on the media