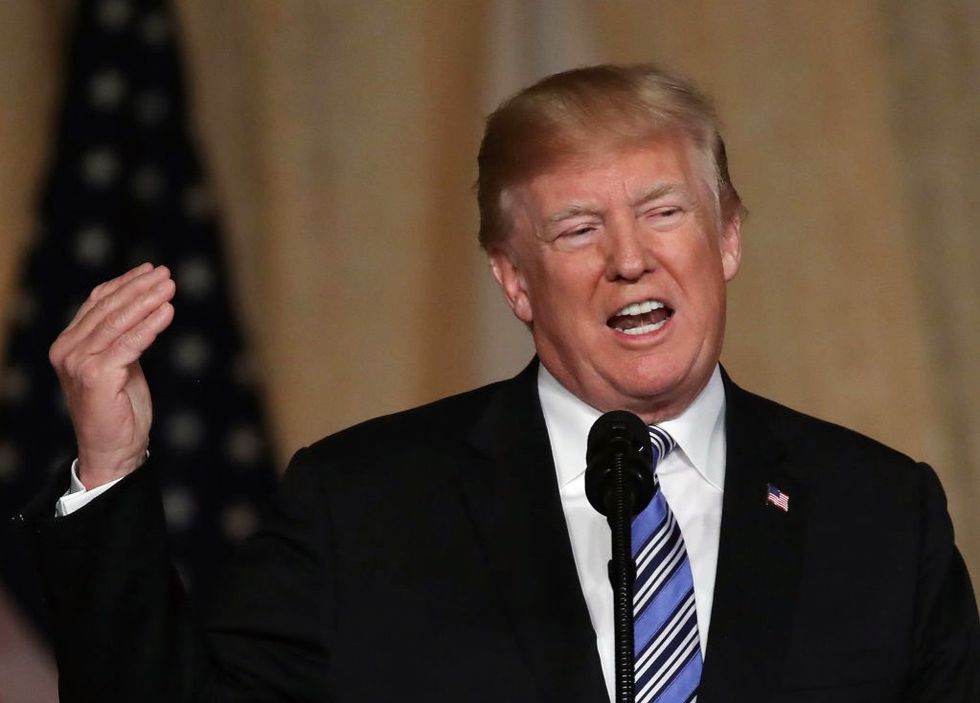 By now most people have heard about a restaurant owner in Lexington, Virginia, asking White House Press Secretary Sarah Sanders to leave their business based on the owner and staff's deeply held beliefs, something Sanders' boss, President Donald Trump, frequently defends to his evangelical Christian base.

However it appears that benefit, being able to deny service based on deeply held beliefs, is reserved for those who support Trump. Monday morning, the president of the United States denigrated a private business on Twitter because they exercised a right he and Sanders defended in the past.

The president did not just claim the restaurant, The Red Hen, had no right to deny service to someone, however.

Trump attacked the business' cleanliness tweeting the place had "filthy" canopies, windows and doors and needed to be painted. He then implied the restaurant was dirty inside as well, despite never having been to the restaurant.

Trump's digs against The Red Hen may backfire though. It reminded the public of the less than stellar health inspection records of a number of Trump properties including Trump crown jewel Mar-a-Lago.

And The Red Hen? Passed all of its recent health code inspections with flying colors.

Mar-a-Lago faced 51 health code violations since 2013 with 30 additional violations at the Mar-a-Lago beach club. This includes one inspection in 2017 that produced 15 separate violations.

The club managed to meet the minimum legal standards required to remain open.

Trump's Washington DC hotel received 10 health code violations when it was inspected in April 2018. The hotel was assessed as a "moderate risk" to public health.

In a May follow-up inspection of the hotel, it maintained it's poor performance and remained a moderate risk.

BLT Prime steakhouse, the restaurant at the Trump DC hotel, also was given a moderate risk rating. However, despite multiple health code violations, Trump's DC property actually rates better than several of his others.

The steakhouse at Trump's international hotel in Las Vegas was forced to shut down in 2012 after inspectors found over 50 health code violations. The restaurant was able to reopen after meeting the minimum legal requirements.

Trump's Doral golf club near Miami, Florida, has Mar-a-Lago beat however. Since 2013 a whopping 524 health code violations were found.

The list of findings includes: multiple sightings of live and dead cockroaches, 20-25 live cockroaches visibly present in the main kitchen during a 2015 visit, “slimy/mold-like build-up” in coolers and freezers, and holes in kitchen walls.

Since the president chose to attack The Red Hen on social media, the Twittersphere has been busily reminding him of his own less than stellar record with cleanliness, many of them responding directly to the president.

The Red Hen passed its most recent health inspection with flying colors, finding no violations. "By contrast, the… https://t.co/Sl9JEiOdMd
— Kyle Griffin (@Kyle Griffin) 1529942403.0

@realDonaldTrump Facts are funny things. It seems your restaurants are absolute shitholes while the Red Hen has an… https://t.co/S2dJx3u96P
— Trump's Feet (@Trump's Feet) 1529955147.0

@realDonaldTrump https://t.co/IqaoHnjaZC a reminder to clean up your own back yard before commenting on others
— photoaddict77 (@photoaddict77) 1529937612.0