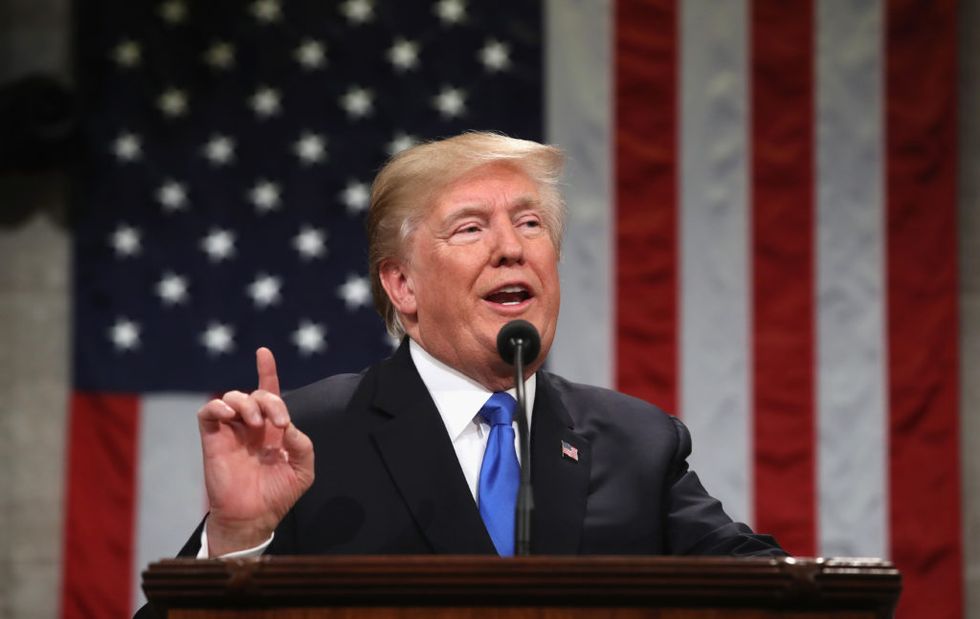 US President Donald Trump gestures during the State of the Union address in the chamber of the US House of Representatives in Washington, DC, on January 30, 2018. (Photo by Win McNamee / POOL / AFP) (Photo credit should read WIN MCNAMEE/AFP/Getty Images)

Donald Trump seems to be treating Tuesday's State of the Union address like a pledge drive.

For the low, low price of $5, the Trump campaign offered donors the chance to see their name displayed live during the address, which a campaign email says "will go down in history as the speech that saved America."

According to The Washington Post, Trump's fundraising page says "The State of the Union speech is not about me. It’s about YOU. Which is why I will have the names of every supporter who contributes today broadcast during my speech on the Official DJT for President Livestream!"

Interestingly, on the official Donald Trump website, the lowest donation amount shown is $35, not $5. According to the Washington Post, $35 is the minimum donation for those who want their name displayed. (It's possible that the $5 amount in the e-mail was a limited-time offer.)

@derekwillis This reminds me of the movie Idiocracy. Are they going to have company logos in the background too? https://t.co/EWGPItqFPS
— KayDi (@KayDi) 1517269861.0

For a $35 campaign contribution to Trump you can have your name shown on the screen during the livestream of the… https://t.co/Ty9rWPNoMG
— Scott Dworkin (@Scott Dworkin) 1517294009.0

Forbes estimates that there will be at least 938 donor names displayed per minute during the address, so good luck spotting yours.

Update: A more recent visit to Trump's fundraising page has a different message than before.

"This is a movement. It's not about just one of us. It's about ALL of us. Which is why your name deserves to be on President Trump's State of the Union supporter list.

"We are printing a list of supporters to give to President Donald J. Trump when he's done tonight, and we want your name to be on it.

Contribute now and make sure he sees your name!"

No word on how this will affect the people who have already donated to have their names shown during the livestream.

Presidential CampaignState of the Union