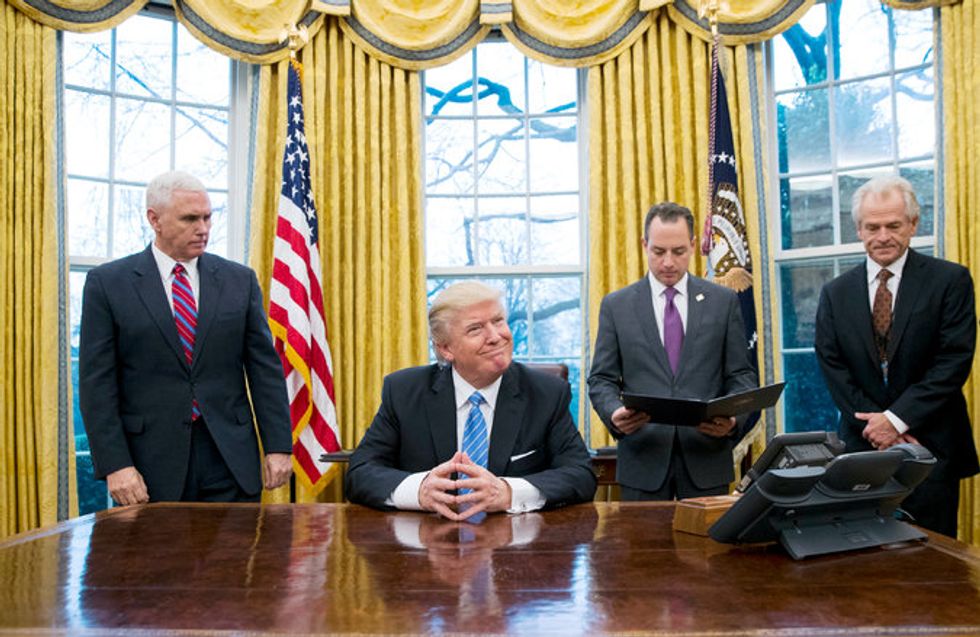 President Donald Trump is expected to sign executive orders today that would halt admissions from Syria and suspend visas from Iraq, Iran, Libya, Somalia, Sudan and Yemen. In doing so, Trump's administration can reduce the number of refugees resettled on American soil and bar the entry of refugees into the United States (except for religious minorities fleeing persecution) for some time until more aggressive vetting procedures are in place.

The information on Trump's national security directives came from officials within the administration who had seen the orders and spoke to reporters on condition of anonymity. In a tweet late Tuesday, Trump said there would be a "big day" ahead for national security.

Trump's plans mirror pledges he made during his presidential campaign to create a Muslim registry, which he often did while admonishing Muslims for not reporting more terror suspects. In fact, he elaborated on his plans for a Muslim registry during the second presidential debate, suggesting that Hillary Clinton, his Democratic opponent, would threaten the security of the country by allowing Syrian refugees on American soil:

It is called extreme vetting… people are coming into our country like we have an idea of who they are and where they are from and what their feelings about our country is, and she wants 550 percent more. This will be the great Trojan horse of all time.

Trump continued to suggest imposing "extreme vetting" of Syrian refugees, although the Obama administration had already made efforts to institute screening procedures designed to weed out anyone who posed a threat. Both Trump and Jeff Sessions, his nominee for Attorney General, have stressed they would ban only refugees from nations which pose a specific threat, rather than impose a blanket ban on refugees from a specific region. Many of Trump's supporters criticized President Barack Obama's decision to increase the overall number of refugees to be resettled in the United States to 85,000 and reserve 10,000 of those slots for Syrians. Obama set the number of refugees to be resettled this year at 110,000, more than twice the number Trump is now considering.

Speaking to reporters yesterday, White House Press Secretary Sean Spicer said the State and Homeland Security Departments would work on the vetting process once Trump's nominee to head the State Department, Rex Tillerson, is installed. The Senate Foreign Relations Committee narrowly approved Tillerson as Secretary of State earlier this week. 11 Republican members of Congress voted in favor of Tillerson, with 10 Democrats voting against his confirmation in a split along party lines. The Republican-controlled Senate will now lead a full vote. Trump would likely instruct the State Department to stop issuing visas to people from the aforementioned nations and require U.S. Customs and Border Protection to stop any current visa holders from those nations from stepping on U.S. soil.

According to Stephen Legomsky, who was chief counsel at U.S. Citizenship and Immigration Services in the Obama administration, the president has the authority to limit refugee admissions and the issuance of visas to specific countries if the administration determines it is in the best interest of the American public. "From a legal standpoint, it would be exactly within his legal rights," said Legomsky. "But from a policy standpoint, it would be [a] terrible idea because there is such an urgent humanitarian need right now for refugees.”

The expected actions drew swift condemnation from immigrant advocacy and human rights groups, who see them as discriminatory rebukes against the longstanding American tradition to welcome immigrants of all backgrounds.

“To think that Trump’s first 100 days are going to be marked by this very shameful shutting of our doors to everybody who is seeking refuge in this country is very concerning,” said Marielena Hincapié, the executive director of the National Immigration Law Center. “Everything points to this being simply a backdoor Muslim ban.”

Hiroshi Motomura, an immigration expert at UCLA School of Law, said legal arguments could claim the executive orders discriminate against a particular religion, rendering them unconstitutional if the countries subjected to the ban are Muslim-majority nations. "His comments during the campaign and a number of people on his team focused very much on religion as the target," Motomura said.

Later this afternoon, Trump will order the construction of a Mexican border wall and will sign the executive order for the wall during an appearance at the Department of Homeland Security. The executive order will increase the staff of U.S. Customs and Border Protection, which would hire an additional 5,000 employees. It would also require the Department of Homeland Security to publicly detail how much aid Mexico receives, an indication that the administration might redirect that money to fund the wall's construction. A second order aims to eliminate sanctuary cities where municipal officials refuse to hand undocumented immigrants to federal authorities. The order will triple resources for Immigration and Customs Enforcement and mandate the federal government to identify "criminal aliens" in the United States.