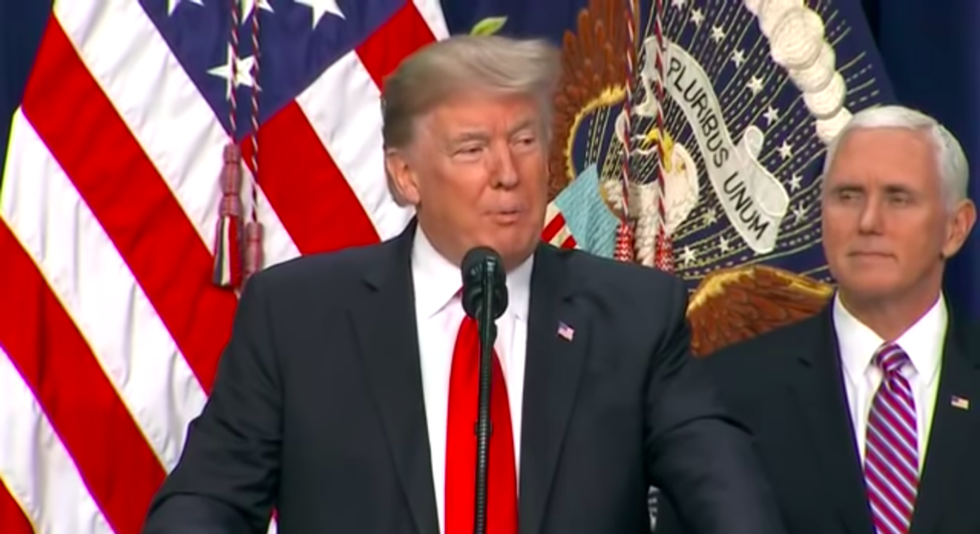 President Donald Trump speaks about his refusal to sign a continuing resolution authority to keep the government running unless he gets over $5 billion for his border wall on December 20, 2018. (New News/YouTube)

In a speech over a wide range of topics, President Donald Trump attempted to justify his decision to renege on his promise to Republican leadership to sign a continuing resolution authority (CRA) to keep the government operating. Congress agreed to a CRA until February 8, 2019 to avoid a shutdown.

With no federal budget approved for fiscal year 2019, which began October 1, 2018, the government is currently operating on a CRA that is set to expire. Trump initially threatened Democrats that he would be "proud" to shut down the government if he did not get the over $5 billion he wants for his unpopular and ill-advised border wall.

However after backlash and appeals from the GOP, Trump agreed to sign the new CRA and keep the government operational.

But then after pushback from his most fervent supporters who rally behind chants of "build the wall" as well as the people on the couch at Fox and Friends and insults from right-wing personalities like Ann Coulter over his latest concession and lack of any wall on the border or Mexico paying for it, Trump changed his mind again.

The President took the opportunity Thursday to justify his position. He stated:

"A nation without borders is a nation not at all. Without borders, we have the reign of chaos, crime, cartels and believe it or not, coyotes."

Trump read from a prepared speech, but the "believe it or not" before he says "coyotes" appears to be an ad lib. Going off script rarely goes well for the President.

And while human traffickers that prey upon people desperate to enter the United States through the southern border are referred to as "coyotes," the President said the word like he meant the four-legged canine variety.

President Trump: "Every nation has not only the right but the absolute duty to protect its borders and its citizens… https://t.co/yZdxzXxI54
— The Hill (@The Hill) 1545367869.0

People who watched the speech overwhelmingly drew the same conclusion...

...the President had no idea he was speaking about the humans who smuggle people across the border rather than the canine that roams the wilds of the Americas.

Seems like Trump thinks he's talking about the animal coyotes and not the traffickers/guides. 🤦‍♀️ https://t.co/IPlJ5Zh6Ny
— Clara Jeffery (@Clara Jeffery) 1545343016.0

Even when Trump repeated the word later in his speech, every indication pointed to him talking about the animal and not the people who are called coyotes.

Once again, people laughed at the President's expense.

And then the government shutdown was averted when someone pointed out to Trump that the whole coyote threat can gen… https://t.co/pKxO2UnlLA
— Tabatha Southey (@Tabatha Southey) 1545387376.0

The current CRA is set to expire on Friday, December 21, 2018. Federal workers were granted a day off for December 24 in advance of the federal holiday on December 25, but it is unclear if they will have jobs to return to on the 26th.