Donald Trump Can't Stop Saying How 'Successful' He Thinks His Hurricane Response in Puerto Rico Was, and People Can't Even 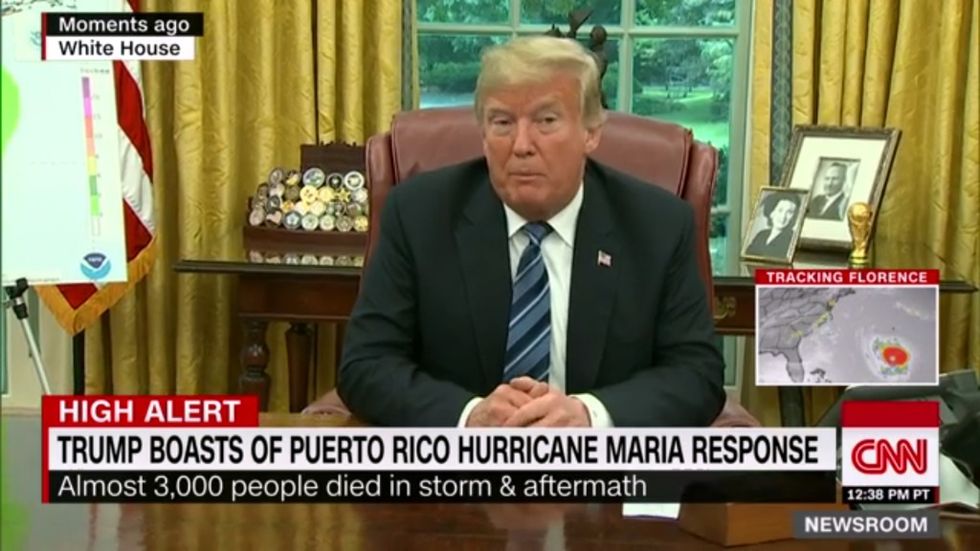 President Donald Trump speaks to reporters in the Oval Office about the lessons learned from Puerto Rico. (CNN/YouTube)

When asked to assess the presidency of George W. Bush, most cite his response to Hurricane Katrina as a low point. Bush himself admitted he regrets some of the decisions made.

When assessing the presidency of Donald Trump, most cite his own errors in regard to Hurricane Maria and the recovery efforts in Puerto Rico. Scandals and missteps plagued the Trump administration in the wake of the deadly storm.

The awarding of the multimillion dollar electrical restoration contract to a company with no disaster experience that belonged to a friend of a cabinet member brought allegations of corruption and cronyism. The official death toll remains unresolved. And getting into Twitter feuds with both the Governor of Puerto Rico and the mayor of San Juan hurt the Trump administration's public image.

And who could forget the paper towels?

But when asked what he learned after Hurricane Maria, President Donald Trump did not give his administration a passing mark. He gave efforts in Puerto Rico the label "one of the best jobs ever done."

People found the response surprising—given the issues in Puerto Rico almost a year after the hurricane hit—leading some to question, what "job" the President referred to in his answer.

Others pointed out which issues the United States citizens in Puerto Rico still face.

@CBSNews Literally had to listen to this bc I can't fathom he actually said this - One of the best jobs ever done?… https://t.co/RoASBmNtoH
— Barbara Cossman (@Barbara Cossman) 1536697254.0

@CBSNews Only someone as half-assed as @realDonaldTrump could possibly think the hurricane response for #PuertoRico… https://t.co/bEPW000aD0
— Jason Ernst (@Jason Ernst) 1536696665.0

@CBSNews As a Puerto Rican I defer from this Orange Specimen's assessment. We still have people without Electricity… https://t.co/51vtZzpVQv
— Tai Pelli (@Tai Pelli) 1536697780.0

@CBSNews What Puerto Rico is he talking about? A year later and they are still recovering. He thinks leaving hund… https://t.co/nEuc3dZ4JT
— Sherry Sherry (@Sherry Sherry) 1536696483.0

Others saw it as ominous news for anyone in Florence's path as the following reactions show.

The question asked about lessons learned. After any event, some lessons should be gleaned from the after action briefing.

While some noted Trump's response to a question about Hurricane Florence.

@CBSNews A person who seems to have no concept of or relation to reality is in fact the President of the United Sta… https://t.co/GRGoHbydNG
— Brad Connolly (@Brad Connolly) 1536695534.0

A few even cited potential health problems if the President's honest review of events led him to call the Trump administration response to Hurricane Maria and Puerto Rico one of the best ever.

@CBSNews You see this is why his lawyers know not to let him talk to the prosecutor because this man can't answer q… https://t.co/GRcbkMIOvX
— Tuscana (@Tuscana) 1536695456.0

However most respondents simply expressed shock.

The latest information on all active tropical storms and hurricanes can be found at the National Oceanic and Atmospheric Administration's (NOAA's) National Hurricane Center website. Hurricane Florence currently threatens the Carolinas and mid-Atlantic and was rated a Category 4 storm as of 5:00pm AST.