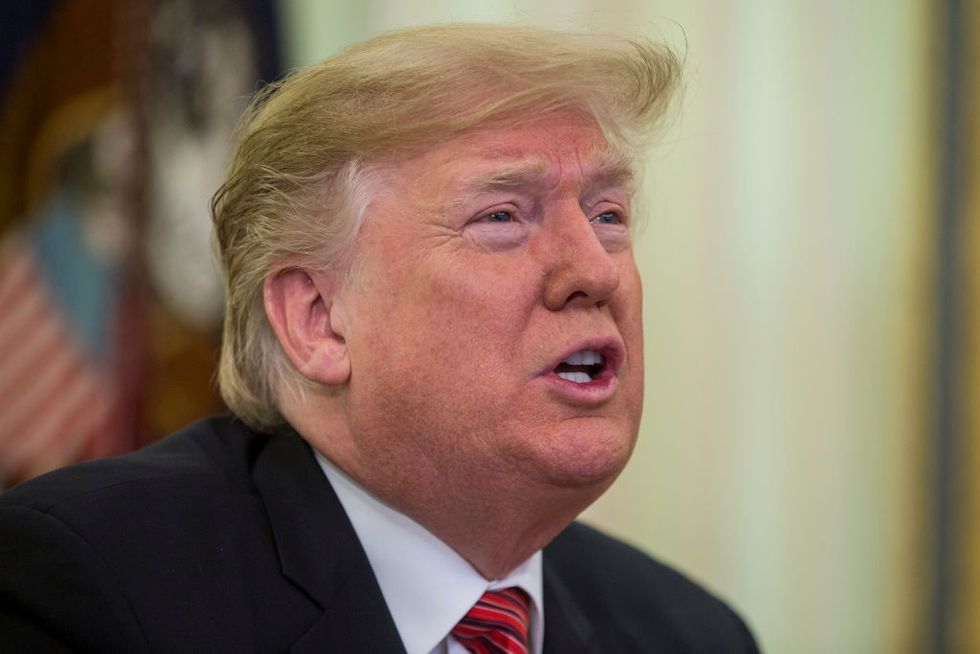 Before the press and public recognized President Donald Trump's habit of constant lying, claims made under the guise of "many people are saying" and "that's what I've heard" were prevalent in then candidate Trump's campaign speeches. Now that people are aware, Trump rarely goes for such phrases in his claims.

But to defend his decision to renege on his vow to GOP leadership to support Congress' stopgap spending bill to keep the federal government fully operational, the President went back to that well.

A portion of the federal government that had not had their fiscal year 2019 budget approved was operating on a continuing resolution authority (CRA). That CRA expired December 21 at midnight.

Republicans in the House and Senate together with their Democratic colleagues supported a new CRA to keep the government running until February while the final budgets were approved.

One agency with no budget is the Department of Homeland Security. Rather than keep his promise to GOP leaders and sign the new CRA, Trump decided to make a stand.

That means the people who secure the border and enforce immigration laws are not getting paid.

But rather than take responsibility for his decision to not pay them, Trump first attempted to solely blame Democrats, despite the GOP still controlling the Senate and House until January. After that excuse received pushback, the President decided to claim the almost 800,000 federal workers who spent Christmas furloughed without pay or working without pay pushed for the government shutdown because his wall is that important to them.

On Christmas day while speaking to reporters, Trump stated:

"Many of those workers have said to me and communicated, ‘stay out until you get the funding for the wall."

Trump claims that “many” federal workers want the government to stay closed: "Many of those workers have said to me… https://t.co/5iDyUtQ8lc
— Philip Rucker (@Philip Rucker) 1545750583.0

His remarks came after the President lamented how his family was all in Palm Beach at Mar-a-Lago while he was stuck at the White House. Trump added:

Poor grammar aside, many saw an issue with Trump's latest claim to justify his decision to deny wages and benefits to almost 800,000 federal employees during the holidays and that "the only one" who does not want his wall "are the Democrats."

The President went on to state:

Trump rounded out his Christmas greeting to the country by adding:

"It’s a disgrace what’s happening in this country. But other than that, I wish everybody a merry Christmas."

But people are calling the President out on his Christmas day claims.

People furloughed and working without pay are feeling the crunch. Who would want that for the sake of a wall the majority of voters in the United States do not support and the experts never asked for?

People are calling it a lie, and referencing others Trump told in the past to justify his actions.

I understand that many of these federal workers POTUS says are happily furloughed for the wall are the 114 year-old… https://t.co/rCVQ0oac4F
— Preet Bharara (@Preet Bharara) 1545767328.0

Trump bizarrely claims ‘many’ federal workers want to go without paychecks until he gets his wall. His mouth knows… https://t.co/MAvBYWW1v4
— The Hummingbird 🐦 (@The Hummingbird 🐦) 1545824419.0

Although some thought Trump may have heard it was the wall or the government needed to stay shut down from at least one federal employee.

Others brought up another Trump claim that they actually believe: the President sees the wages and benefits of the workers he furloughed who are not guaranteed backpay after the shutdown ends as a cash windfall to pay for his wall.

@PreetBharara It's hard to believe Trump actually tweeted that he will use the #shutdown money to build the wall; i… https://t.co/gbooUFMyMM
— Barb (@Barb) 1545768965.0

Meanwhile, federal civil service employees are speaking out online and it is not to say how much they want Trump's wall instead of their paychecks.

My husband is active duty Coast Guard. Everyone thinks the military is getting paid during the shutdown, but the Co… https://t.co/YkuhecjRH0
— Katy⚓ (@Katy⚓) 1545688405.0

My husband is federal law enforcement. He had the weekend off but now has to head back to work on Christmas morning… https://t.co/WghQQc3Dot
— Maria Ortega (@Maria Ortega) 1545755931.0

#ShutdownStories single mom, single income. If my pay from last two weeks shows up I have enough to pay bills, but… https://t.co/PoVUFabf7C
— Oceans of Hope (@Oceans of Hope) 1545668642.0

While the #ShutdownStories of furloughed federal employees and civil service workers required to work for no pay continue to be posted on Twitter, the one thing missing are workers stating Trump's wall is more important than their families or future.

The President reiterated on Christmas that they will be out of work until he gets his wall.