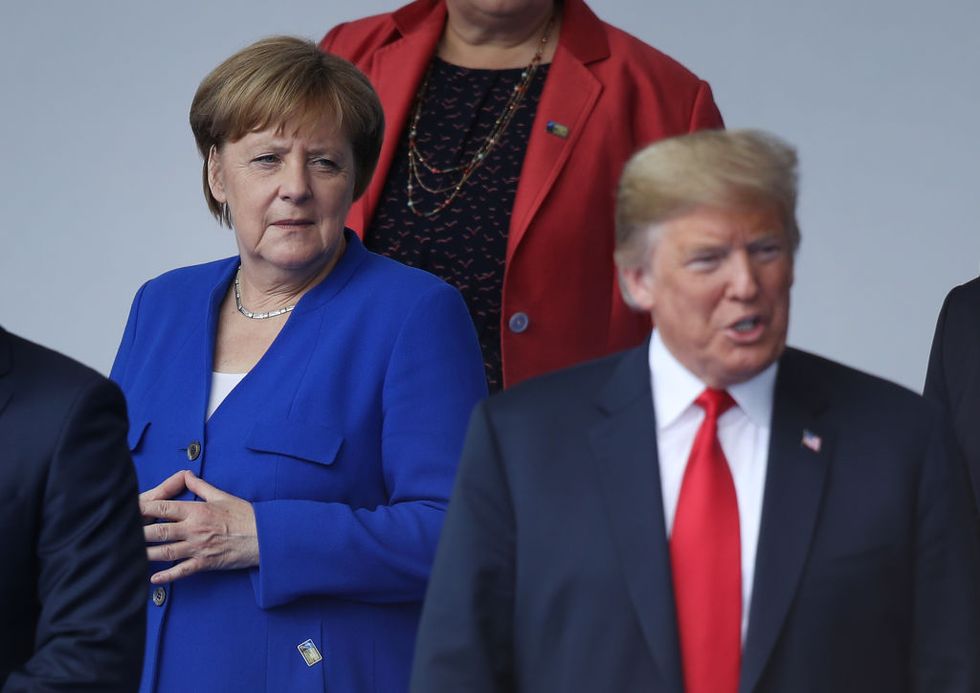 BRUSSELS, BELGIUM - JULY 11: German Chancellor Angela Merkel and U.S. President Donald Trump attend the opening ceremony at the 2018 NATO Summit at NATO headquarters on July 11, 2018 in Brussels, Belgium. Leaders from NATO member and partner states are meeting for a two-day summit, which is being overshadowed by strong demands by U.S. President Trump for most NATO member countries to spend more on defense. (Photo by Sean Gallup/Getty Images)

German Chancellor Angela Markel rejected President Donald Trump's claims that Germany "is totally controlled by Russia" by recalling her own youth in Soviet-dominated East Germany and defending her nation's independence and policies.

Trump made his remarks ahead of a NATO leaders’ summit in Brussels this morning. He specifically cited the controversial Nord Stream 2 gas pipeline project, an offshore natural gas pipeline from Vyborg in the Russian Federation to Greifswald in Germany.

“I think it’s very sad when Germany makes a massive oil and gas deal with Russia, where you’re supposed to be guarding against Russia and Germany goes out and pays billions and billions of dollars a year to Russia,” Trump said.

He added: "They will be getting between 60 and 70 percent of their energy from Russia and a new pipeline, and you tell me if that is appropriate because I think it's not."

“Because of given circumstances, I want to point out one thing: I experienced the Soviet occupation of one part of Germany myself. I am very happy that today we are united in freedom, the Federal Republic of Germany. Because of that we can say that we can make our independent policies and make independent decisions. That is very good, especially for people in eastern Germany.”

Prickly reply to Trump from Angela Merkel: “I myself have experienced Soviet control over part of Germany.” But G… https://t.co/Lei7pTFQLx
— Jennifer Jacobs (@Jennifer Jacobs) 1531313020.0

Merkel also struck down Trump's claims that the United States spends too much on defense, while other NATO members spend too little.

"Germany contributes a lot... Germany is the second largest provider of troops, the largest part of our military capacity is offered to NATO and until today we have a strong engagement toward Afghanistan. In that we also defend the interests of the United States," she said.

She concluded her statements by announcing Germany's plan to increase its defense spending:

We are willing to increase our defense spending as agreed in Wales. By 2028, we will have increased spending by 28 percent since 2014. Given those facts, I confidently join this summit.

Merkel's statements appear to have fallen on deaf ears; reporters have confirmed the president's intention to meet with Merkel and "reiterate his morning assertion" that Germany is controlled by Russia.

Just in: Trump will meet privately with Angela Merkel this afternoon in a pull-aside at NATO and plans to reiterate… https://t.co/3CEvQq0lbP
— Philip Rucker (@Philip Rucker) 1531302678.0

The president's claim that the United States' NATO commitments are too overbearing is also misleading. It was Merkel who, along with President Obama, raised NATO spending in 2014 after Vladimir Putin's forces invaded Ukraine and annexed Crimea.

The NATO summit is certain to define a rocky week for international diplomacy, and the president's comments come mere weeks after Canada, through its Foreign Affairs Minister, rejected Trump's call for Russia to be readmitted into the "Group of 7," a group of the seven largest advanced economies in the world.

Vladimir Putin, for his part, agrees that Russia should be readmitted.

“Russia was invited to be part of this club and I think that was a very wise initiation, and an invitation full of goodwill,” Foreign Affairs Minister Chrystia Freeland told reporters at the summit. “Russia, however, made clear that it had no interest in behaving according to the rules of Western democracies.”

Freeland’s statements echo remarks made by Stephen Harper, the former prime minister, in 2015, when he said that Russia should never be allowed back into the summit as long as Vladimir Putin is in power.

“Canada would very, very strongly oppose Putin ever sitting around that table again. It would require consensus to bring Russia back and that consensus will just not happen,” he said at the time. “Russia is more often than not trying deliberately to be a strategic rival, to deliberately counter the good things we’re trying to achieve in the world for no other reason than to just counter them.”

Moreover, his statements that Russia has Germany under its control are ironic given the fact that he and many of his associates have been under investigation for potentially colluding with Russian operatives to win the 2016 presidential election.