We Now Know Why Trump Chose Ronny Jackson to Run the VA, and It's the Most Donald Trump Thing Ever 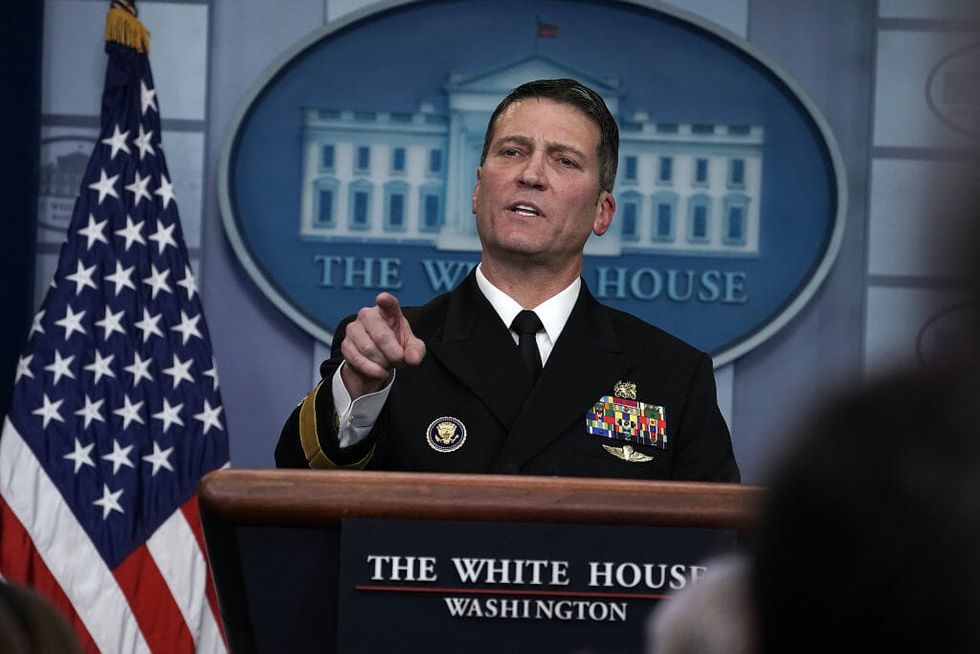 According to a White House official, the way Jackson handled himself in January when speaking to reporters during an extended grilling about Trump's health and cognitive fitness played a part in his nomination to the Department of Veteran's Affairs.

Asked to explain Jackson's qualifications for the position, the official highlighted Jackson's medical and military background, adding that he had received copious praise for his work with previous administrations.

Dr. Jackson is a good and honorable person, fine doctor and career military but you do get the sense that this has… https://t.co/mQ04XPDrKY
— David Axelrod (@David Axelrod) 1522274201.0

In a statement, Senator Johnny Isakson (R-GA), who serves as the chairman of the Senate Committee on Veterans Affairs, praised the nomination:

Dr. Shulkin has made a tremendous impact toward improving the lives of veterans during his time at the U.S. Department of Veterans Affairs. He has been instrumental in all that we have accomplished in the last year. I look forward to meeting Admiral Jackson and learning more about him.

That hasn't stopped legislators and leaders of organizations from questioning Jackson's qualifications, however.

"I have no idea what to expect from him, quite frankly," Vietnam Veterans of America president John Rowan told CNN, adding that the pick could have been "much worse" amid the disappointment of losing Shulkin. We were hoping that we prevailed, but at least he isn't appointing one of those rabid privatization people, so that's a plus."

We have a lot of questions about the nominee. We think the White House has a tall order ahead of it in showing that this doctor is qualified to lead a $200 billion agency. There's a possibility that the doctor couldn't even say no to the president. We're not a government that's run by our military.

A former VA official said his “first reaction was OMG. That’s still my reaction... The replacement has no experience. The VA is the hardest department to manage as it is so political."

VoteVets, an organization which works to elect veterans with progressive values to public office, also weighed in, urging lawmakers to ask Jackson "blunt, direct questions about how the VA works."

Senator Ted Lieu (D-CA) said that being the president's doctor "is not a legitimate qualification."

More chaos in @realDonaldTrump Administration with the firing of VA Secretary David Shulkin. Not clear to me that… https://t.co/7x1KiUkR7B
— Ted Lieu (@Ted Lieu) 1522282330.0

Brian Klaas, a Washington Post columnist, criticized Jackson for his lack of "management experience that would prepare him to oversee 377,000 employees and a budget of $180 billion per year –– other than that Trump likes him."

But perhaps the harshest criticisms came from David Shulkin, who in a New York Times op-edsaid that "some in the Trump administration saw me as an obstacle to privatization":

It seems that these successes within the department have intensified the ambitions of people who want to put V.A. health care in the hands of the private sector. I believe differences in philosophy deserve robust debate, and solutions should be determined based on the merits of the arguments. The advocates within the administration for privatizing V.A. health services, however, reject this approach. They saw me as an obstacle to privatization who had to be removed. That is because I am convinced that privatization is a political issue aimed at rewarding select people and companies with profits, even if it undermines care for veterans...

I have fought to stand up for this great department and all that it embodies. In recent months, though, the environment in Washington has turned so toxic, chaotic, disrespectful and subversive that it became impossible for me to accomplish the important work that our veterans need and deserve. I can assure you that I will continue to speak out against those who seek to harm the V.A. by putting their personal agendas in front of the well-being of our veterans.

As many of you know, I am a physician, not a politician. I came to government with an understanding that Washington can be ugly, but I assumed that I could avoid all of the ugliness by staying true to my values. I have been falsely accused of things by people who wanted me out of the way. But despite these politically-based attacks on me and my family’s character, I am proud of my record and know that I acted with the utmost integrity. Unfortunately, none of that mattered.

As I prepare to leave government, I am struck by a recurring thought: It should not be this hard to serve your country.

At a White House press briefing in January, Jackson vouched for Trump's health, saying his neurological functions are excellent and assuring the press corps that the president would be able to serve his entire term. He added that Trump likely had "incredible genes" that allowed him to remain healthy despite a lack of exercise and a taste for fast food.

"That's just the way God made him," Jackson said at the time.