How is this a good idea. 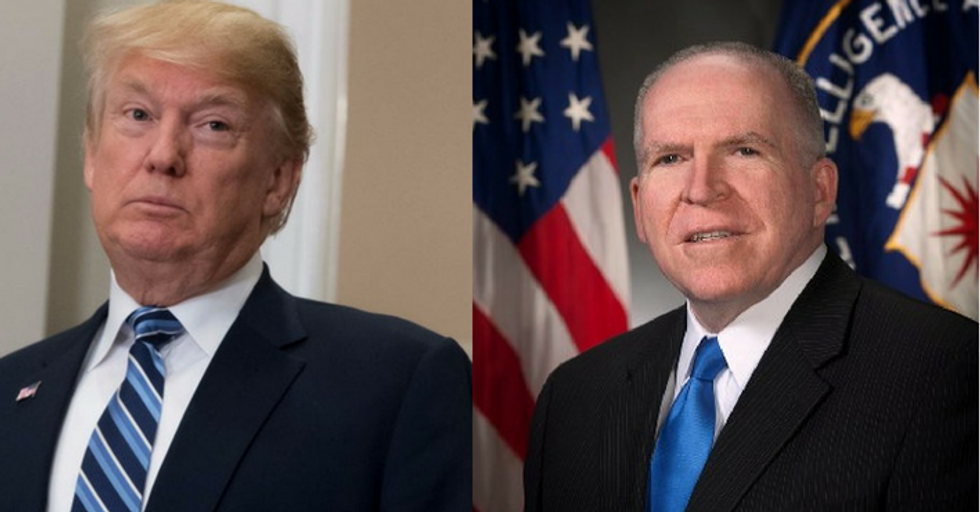 While reading a prepared statement from President Donald Trump, White House Press Secretary Sarah Sanders announced Wednesday that the President ordered the revocation of the security clearance for a former government official. The announcement that former Trump administration officials now under investigation for a variety of criminal offenses would be long overdue.

This was not that announcement.

I have a unique constitutional responsibility to protect the nation's classified information, including by controlling access to it. Today, in fulfilling that responsibility, I have decided to revoke the security clearance of John Brennan, former director of the Central Intelligence Agency."

Instead of publicly revoking the clearances of fired and resigned Trump administration officials like Hope Hicks or Michael Flynn, Trump decided to begin revoking clearances of his political opponents—those critics with expert credentials and federal pedigrees who take exception to the running of the Trump White House.

According to the President's statement, the action is justified because:

Mr. Brennan's lying and recent conduct characterized by increasingly frenzied commentary is wholly inconsistent with access to the nation's most closely held secrets."

So who is the first target of Trump's purge?

Brennan spent 25 years with the CIA before establishing and directing the National Counterterrorism Center after 9/11 at the request of President George W. Bush. The White House provided no proof or even hinted that Brennan misused his security clearance at any time.

The lies Trump alludes to are criticisms Brennan publicly made of the President's policies and lack of security protocols that lead to situations like people without clearances in the Oval Office daily for over a year and secret recordings being made in the Situation Room. Since those are matters of public record, they are not actually lies.

Brennan left federal service for a few years after completing his special assignment from Bush, but often consulted on issues at the request of the White House. Then in 2009 Obama asked Brennan to return as a Homeland Security Adviser then in 2013 to head the CIA.

The one-time lowly analyst who worked his way up through the ranks provides a wealth of experience and knowledge on matters of national security and counterterrorism. It is for that reason his clearance was retained by the government after he retired in January 2017.

I had the privilege of working with @JohnBrennan at the White House. I have never met anyone more dedicated to defe… https://t.co/pPwj6b93qh
— Michael McFaul (@Michael McFaul) 1534368507.0

Separated and retired employees that the government chooses to retain clearances for gain no special access however so they pose no inherent risks. They cannot walk into restricted areas or request classified or top-secret documents.

So what benefit did his security clearance have for John Brennan? None, really.

The sole purpose of retained clearances is for the benefit of the government. If a retired of separated expert's help is needed, they can be called on for advice or assistance or in the event of catastrophic events like 9/11, to fill in where mass vacancies of experienced personnel happen too quickly for the government to handle through normal hiring or training.

So why revoke a clearance that only benefits the government? John Brennan himself spoke to that on Twitter.

This action is part of a broader effort by Mr. Trump to suppress freedom of speech & punish critics. It should gravely worry all Americans, including intelligence professionals, about the cost of speaking out."

My principles are worth far more than clearances. I will not relent."

As part of the President's statement, Sanders listed other targets. Each person on the following list is both a seasoned expert and a Trump critic.

Trump criticized Ohr on Twitter because he knows Christopher Steele, who compiled an as yet substantiated dossier containing damaging, but accurate information about Trump.

Bruce Ohr of the “Justice” Department (can you believe he is still there) is accused of helping disgraced Christoph… https://t.co/NdbCTIo4ei
— Donald J. Trump (@Donald J. Trump) 1534247701.0

Sanders refused to comment on why the list did not include Trump's former national security adviser Michael Flynn, who pleaded guilty to lying to the FBI or any other Trump official under investigation for misconduct or criminal activity.

The Twittersphere certainly had comments on the issue however.

If you think revoking Brennan's clearance as part of a political Enemies List is okay because you got two SCOTUS se… https://t.co/zfeY3obsPg
— Tom Nichols (@Tom Nichols) 1534368391.0

And writer Jamil Smith pointed out that Trump's description of Brennan sounded a lot more like someone else Trump knows really well.

But do not worry. According to Vice President Joe Biden, Brennan will be just fine.