Donald Trump Just Retweeted a Bonkers Meme Calling for 'Trials for Treason' for Trump's Political Enemies, and People Can't Even

The President did that. 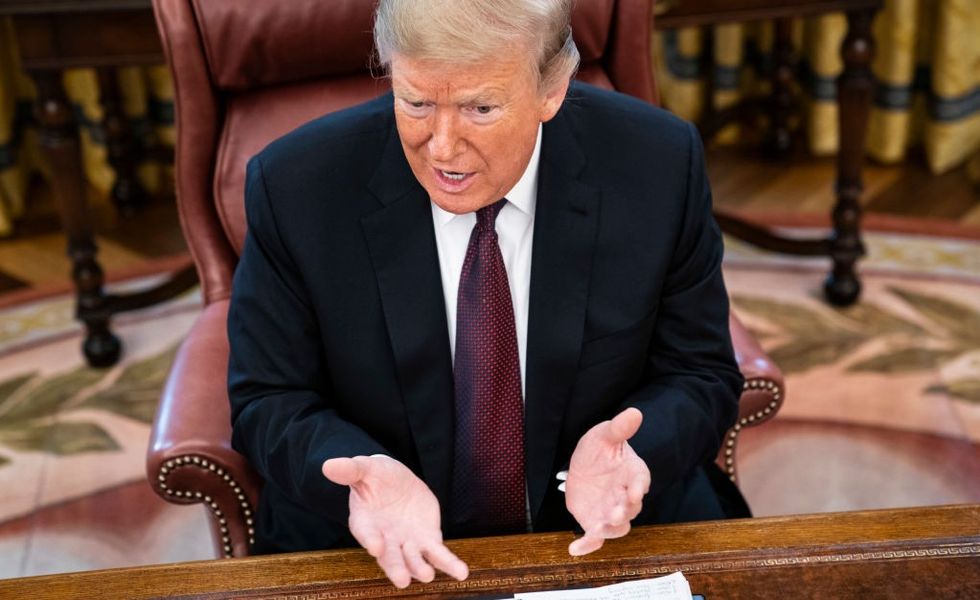 President Donald J. Trump speaks during an interview with Washington Post reporters Philip Rucker and Josh Dawsey in the Oval Office at the White House on Tuesday, Nov. 27, 2018 in Washington, DC. (Photo by Jabin Botsford/The Washington Post via Getty Images)

President Donald Trump spent time Wednesday railing against the Department of Justice ordered probe into Russian interference in the 2016 presidential election. Then the President went off script and added a bit of a retweet storm.

Most of the retweets came from the Twitter account "The Trump Train." Self-described as "Welcome to the #TrumpTrain, the greatest political movement in history. Proud American. RT'd by @realDonaldTrump *Fan account*", the account posts memes and false claims from conspiracy theories to outright lies.

Trump began his retweet storm with a meme. In it, former Presidents, Robert Mueller, Democratic leaders and members of his own administration are shown behind bars. The meme calls for "treason trials" for all.

From there, the President retweeted three posts from The Trump Train of dubious information that favored him or his policies...

...then on to another fan account, "VP Fan," for some bashing of private citizen and former opponent, Hillary Clinton...

...ending with a video clip of an interview with Hillary Clinton posted by conservative media personality Charlie Kirk where he tries to claim Clinton is racist.

The President made statements in the past that he was too busy for many of the traditional duties of the President, such as reading reports and intelligence briefings. He also stated he did not read books for the same reason.

But Thursday's retweets show a President with the free time to scour various fan accounts on Twitter for posts that he likes. This, along with the attack by a sitting President against private citizens and political rivals and critics, calling their criticism "treason" disturbed many online.

And they called Trump out for it in response to his retweets.

@The_Trump_Train @realDonaldTrump Your base might enjoy seeing you retweet from a conspiracy page, but the rest of… https://t.co/ADcuSWZWcb
— Carrye DeCrane (@Carrye DeCrane) 1543419857.0

@The_Trump_Train @realDonaldTrump Are you saying Rod Rosenstein should be tried for Treason? You do know he currently works for you?
— David Bethune (@David Bethune) 1543420618.0

@The_Trump_Train @realDonaldTrump So glad the president has toned down his rhetoric
— Ryan Canon (@Ryan Canon) 1543415269.0

While one commenter on the President's retweet shared this image, also invoking Hillary Clinton.

Others also responded with their own memes.

On Monday, President Trump called for a state run media, because mainstream media fails to praise him in international broadcasts at a level he feels is adequate.

While CNN doesn’t do great in the United States based on ratings, outside of the U.S. they have very little competi… https://t.co/mQBNuDHedg
— Donald J. Trump (@Donald J. Trump) 1543261649.0

As of noon Wednesday, President Trump has not deleted the retweet calling his rivals treasonous.