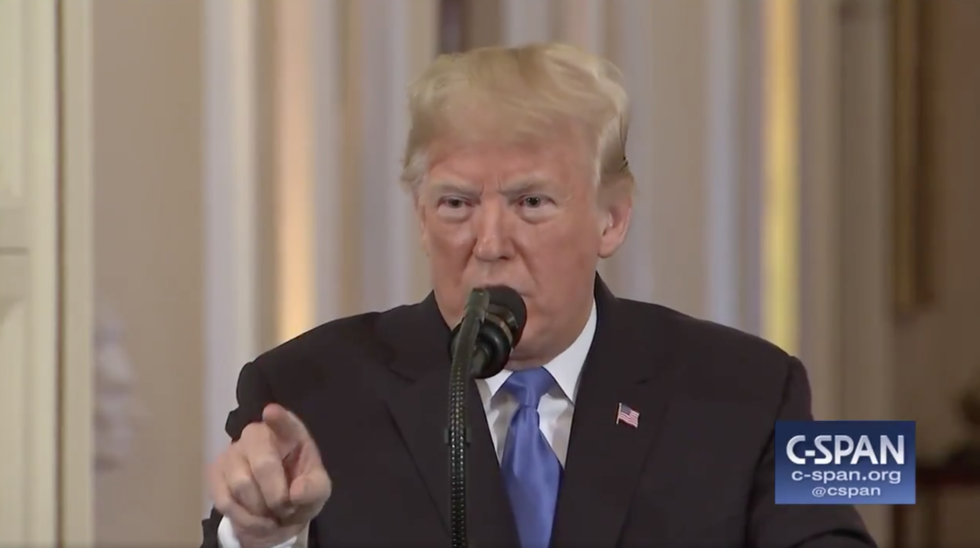 After a black reporter asked President Donald Trump about his self-professed nationalism, he dismissed her inquiry as "racist."

“There are some people that say that now the Republican Party is seen as supporting white nationalists because of your rhetoric,” Yamiche Alcindor of the PBS Newshour had said.

“I don’t know why you’d say that,” the president replied. “That’s such a racist question.”

The president proceeded to express disbelief at Alcindor's question.

I asked President Trump what he thinks of people seeing his rhetoric as emboldening white nationalists and whether… https://t.co/gL5O1cYVpA
— Yamiche Alcindor (@Yamiche Alcindor) 1541614738.0

Alcindor noted that she––as shown in the video footage above––followed up with a question "about his proposed middle class tax cut" because "that's what journalists do."

A note: I followed up the president calling my question "racist" with a policy question about his proposed middle c… https://t.co/BFvYuRpnVG
— Yamiche Alcindor (@Yamiche Alcindor) 1541616132.0

She added that she asked the question because even if the president "doesn't intend it, some see him as directly appealing to racists."

Other members of the press came to Alcindor's defense:

.@Yamiche asked a fair and important question about whether Trump's embrace of the "nationalist" label is an embrac… https://t.co/wl6KbjcaLT
— Philip Rucker (@Philip Rucker) 1541614116.0

Trump referred to himself as a "nationalist" last month during a rally in which he denigrated Representative Beto O'Rourke (D-TX), who challenged Republican incumbent Ted Cruz's Senate seat.

The term “nationalist” has become associated with the alt-right movement, which predominantly supports the president’s agenda and has regularly challenged for espousing white supremacist ideology.

Trump has defended those comments, saying it was meant as a contrast to "globalists" who place international interests before those of the United States.

"I love our country. I do," he told Alcindor. "You have nationalists. You have globalists. I also love the world. And I don't mind helping the world, but we have to straighten out our country first. We have a lot of problems. But to say that, what you say is so insulting to me, it's a very terrible thing you said."