When Trump Supporters Chanted 'Build That Wall' at His El Paso Rally, Trump Actually Stopped to Correct Them, Because He Has a New Slogan Now 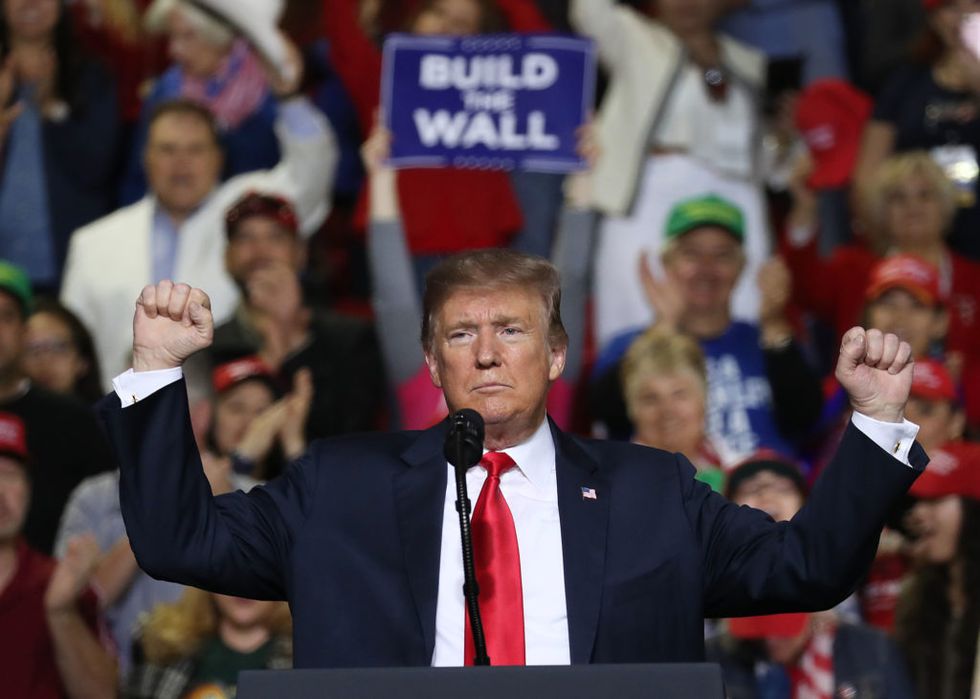 EL PASO, TEXAS - FEBRUARY 11: U.S. President Donald Trump speaks during a rally at the El Paso County Coliseum on February 11, 2019 in El Paso, Texas. Trump continues his campaign for a wall to be built along the border as the Democrats in Congress are asking for other border security measures. (Photo by Joe Raedle/Getty Images)

A pillar of President Donald Trump's 2016 campaign was erecting a wall at the southern border as a means to curtail illegal immigration. As Trump vilified immigrants throughout his campaign, supporters at his rallies began to bellow one succinct phrase: "Build that wall."

Flash forward to the now-President's rally in El Paso, Texas last night, and his supporters were invoking those three words again, possibly with less patience than in 2016. As they chanted, the President stopped to correct them, informing them of a new slogan.

President Trump responds to crowd interruptions: “Where do these people come from? They go back home to mommy. They… https://t.co/nTdWiPeYMi
— Kyle Morris (@Kyle Morris) 1549940077.0

The President stopped the chants of "build that wall" to say:

"Now, you really mean 'finish that wall,' cause we've built a lot of it."

Despite the inaccuracy, it looks like this slogan will play a big part in the President's messaging.

But is it true? The answer won't surprise you.

In 2017, the first year of his Presidency, Trump was allocated approximately $1.6 billion for border security, however the funding was designated to fortify existing fencing, not to expand the wall as Trump has constantly implied.

Yamiche Alcindor of PBS News called out Trump earlier in the day for making a similar claim.

Pres Trump, while meeting with more than a dozen U.S. sheriffs, repeats again something that is clearly not true: "… https://t.co/tEcaYzoQ35
— Yamiche Alcindor (@Yamiche Alcindor) 1549918965.0

People are calling him out.

TRUMP: I want the banner to say FINISH THE WALL! BANNER DESIGNER: but... they haven’t started construction on the… https://t.co/OGYyKnqJ1y
— DogsHateBoots (@DogsHateBoots) 1549981822.0

Producing banners that say “Finish the Wall” for a wall that hasn’t been started is sad, tired and desperate.
— Steven Beschloss (@Steven Beschloss) 1549976302.0

His supporters attending the rally, however, didn't seem to care.

They cheered more and more aggressively for the building of the wall, for the imprisonment of Hillary Clinton, and to vilify CNN.

The whole ordeal brought flashbacks of the 2016 campaign, and what could be to come in 2020.

It's depressingly dystopian to see a crowd of hooligans roaring approval at a bellicose billionaire underneath the… https://t.co/8NGStXG9KR
— Tony Cardone (@Tony Cardone) 1549952865.0

@CBSNews He will never build the wall. The billion dollars he got will mostly go to lawyers fighting rancher lawsuits .
— Bravo Bud⭐️ (@Bravo Bud⭐️) 1549939570.0

At his 2016 rallies, Trump proved willing and eager to lie to his supporters, and they revealed themselves as ready to accept any claims he made.

That dynamic appears to be holding fast through 2020.