Judge Just Refused Trump's Request to Dismiss DACA Lawsuit, and He Used Trump's Own Words Against Him 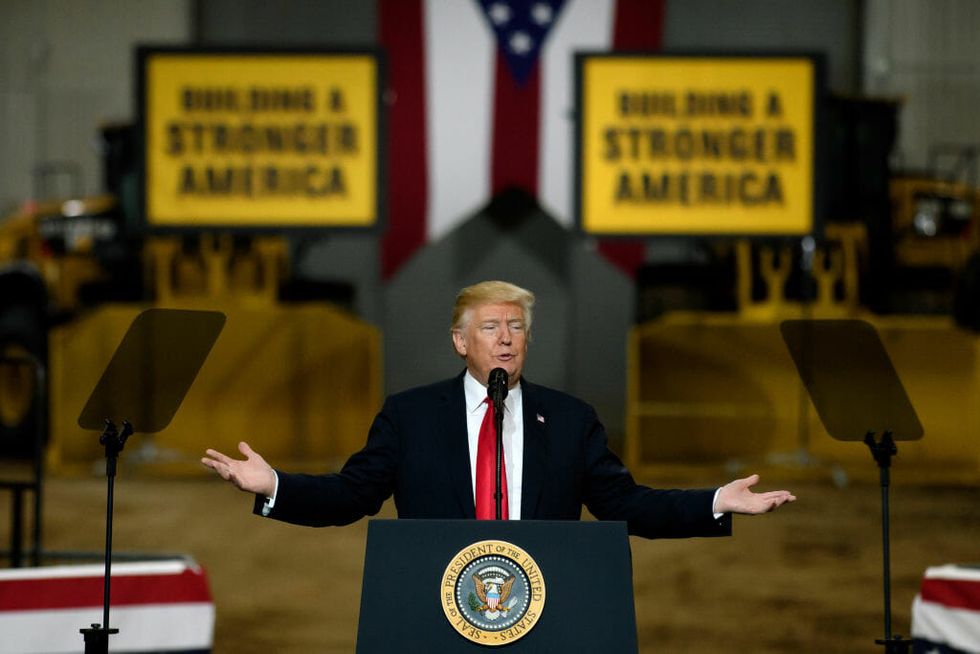 RICHFIELD, OHIO - MARCH 29: President Trump speaks to a crowd of 300 to 400 people gathered at the Local 18 Richfield Facility of the Operating Engineers Apprentice and Training, a union and apprentice training center specializing in the repair and operation of heavy equipment on Thursday, March 29, 2018. (Jeff Swensen/Getty Images)

Judge Nicholas Garaufis, a federal judge in Brooklyn, ruled yesterday that a lawsuit seeking to preserve DACA, or Deferred Action for Childhood Arrivals, can continue.

The judge's ruling struck down the Justice Department's motion to dismiss the lawsuit, which claims that a coalition of immigration lawyers and a group of Democratic state attorneys general have not proven that the Trump administration's decision to roll back the program in September was racially motivated.

In his order rejecting the motion, Judge Garaufis cites President Donald Trump's “racially charged language,” adding that his use of “racial slurs” and “epithets” both as a candidate and as president had created a “plausible inference” that the decision to curb DACA violated the Constitution's equal protection clause.

A federal judge has ruled that a lawsuit targeting Trump's decision to end DACA can proceed, despite a push by the… https://t.co/BlxTJcp4qE
— Kyle Griffin (@Kyle Griffin) 1522365931.0

The decision to rescind DACA, Judge Garaufis added, violated the Administrative Procedure Act (APA), a federal law which governs the way in which the federal government's administrative agencies may propose and establish regulations and prohibits repealing policy on capricious––rather than rational––notions.

While the order was not, as The New York Times notes, "a conclusive win for the plaintiffs," it allows the case to move forward toward a summary judgment decision or a trial.

“One might reasonably infer,” Judge Garaufis wrote, “that a candidate who makes overtly bigoted statements on the campaign trail might be more likely to engage in similarly bigoted action in office.”

Judge Garaufis did note that looking for racial bias, especially in “campaign-trail statements,” could result in an “evidentiary snark hunt,” he acknowledged that his court could not “bury its head in the sand when faced with overt expressions of prejudice.”

The plaintiffs reacted to the ruling with glee.

Jessica Hanson, a lawyer for the National Immigration Law Center, said that the ruling “again acknowledged that our brave plaintiffs present important claims, including that the decision to terminate DACA was rooted in Trump’s bias against Latinos.”

Others also reacted to the ruling.

No big deal: Yet another federal judge has found that one of Donald Trump’s executive actions was infected with ani… https://t.co/6fH1zRVlsv
— Cristian Farias (@Cristian Farias) 1522405387.0

The Justice Department, meanwhile, did not respond to Judge Garaufis' criticisms of President Trump. Devin O'Malley, a spokesman for the DOJ, said that DACA was “an unlawful circumvention of Congress” and that the Trump administration was “within its lawful authority” to repeal it.

The president has a history of making racially disparaging comments, and has been accused of harboring racial animus.

For example, During a June 2015 speech announcing his candidacy, Trump said some Mexicans are "rapists."

"When Mexico sends its people, they're not sending their best," Trump said at the time.

In January, the president made headlines after a report that he had made disparagingly racist remarks about immigrants from Haiti and African nations during a meeting with Congressional leaders.

“Why are we having all these people from shithole countries come here?” the president asked, according to lawmakers who were present at the meeting.

The president then suggested that the United States should instead bring more people from countries such as Norway before singling out Haiti. “Why do we need more Haitians?” he also asked. “Take them out.”

Trump has also called for "a total and complete shutdown of Muslims entering the United States," a notion which has jeopardized numerous attempts by the administration to enforce a travel ban from several Muslim-majority nations.

Nor is this the first time that a federal judge has used Trump's own words against him.

In March 2017, federal judges in Hawaii and Maryland cited President Donald Trump’s own rhetoric and tweets as evidence of his desire to ban Muslims from the United States as they issued nationwide temporary restraining orders on his new travel ban.

In his decision blocking the Trump administration’s revised travel ban, which would have banned people from Iran, Libya, Somalia, Sudan, Syria, and Yemen from entering the US for 90 days and all refugees for 120 days, Judge Derrick Watson of Hawaii wrote that all the evidence he needed was on the news––and on Trump’s personal Twitter account. The opinion is replete with the president’s own words, including ‘Donald J. Trump is calling for a total and complete shutdown of Muslims entering the United States,’” a quote from the Trump campaign’s own website.

In his decision, Judge Watson cites a tweet Trump wrote in January, explaining why the administration rushed to put the original travel ban into effect. It was enough to convince him that the intention to ban Muslims is clear, even if the word “Muslim” never appears in the executive order.

“These plainly worded statements betray the executive order’s stated secular purpose,” Watson wrote.”The record before this court is unique,” he continues elsewhere, and it includes significant and unrebutted evidence of religious animus driving the promulgation of the Executive Order and its related predecessor.” He cites the following from an interview Trump gave Anderson Cooper in 2016:

In March 2016, Mr. Trump said, during an interview, “I think Islam hates us.” Mr. Trump was asked, “Is there a war between the West and radical Islam, or between the West and Islam itself?” He replied: “It’s very hard to separate. Because you don’t know who’s who… But there’s a tremendous hatred. And we have to be very vigilant. We have to be very careful. And we can’t allow people coming into this country who have this hatred of the United States. . . [a]nd of people that are not Muslim.”

Watson also cites words from presidential staffers, including Stephen Miller, who authored the first ban, who have argued that a temporary ban on travel for refugees and visitors from predominantly Muslim nations is necessary until national security officials reassess vetting procedures. In a February interview, Miller told reporters that the new travel ban would be “responsive to the judicial ruling” holding it up and have “mostly minor technical differences.”

The illogic of the Government’s contentions is palpable. The notion that one can demonstrate animus toward any group of people only by targeting all of them at once is fundamentally flawed. Equally flawed is the notion that the Executive Order cannot be found to have targeted Islam because it applies to all individuals in the six referenced countries. It is undisputed, using the primary source upon which the Government itself relies, that these six countries have overwhelmingly Muslim populations that range from 90.7% to 99.8%. It would therefore be no paradigmatic leap to conclude that targeting these countries likewise targets Islam. Certainly, it would be inappropriate to conclude, as the Government does, that it does not.

U.S. District Judge Theodore Chuang, who issued the Maryland ruling, also granted a preliminary injunction on a nationwide basis, but declined to stay the ruling should an emergency appeal be filed. On the question of evidence, Judge Chuang agreed with Judge Watson.

“These statements, which include explicit, direct statements of President Trump’s animus toward Muslims and intention to impose a ban on Muslims entering the United States, present a convincing case that the first executive order was issued to accomplish, as nearly as possible, President Trump’s promised Muslim ban,” he wrote.

“In particular,” he continued, “the direct statements by President Trump and [former New York City Mayor Rudy] Giuliani’s account of his conversations with President Trump reveal that the plan had been to bar the entry of nationals of predominantly Muslim countries deemed to constitute dangerous territory in order to approximate a Muslim ban without calling it one precisely the form of the travel ban in the first executive order.”