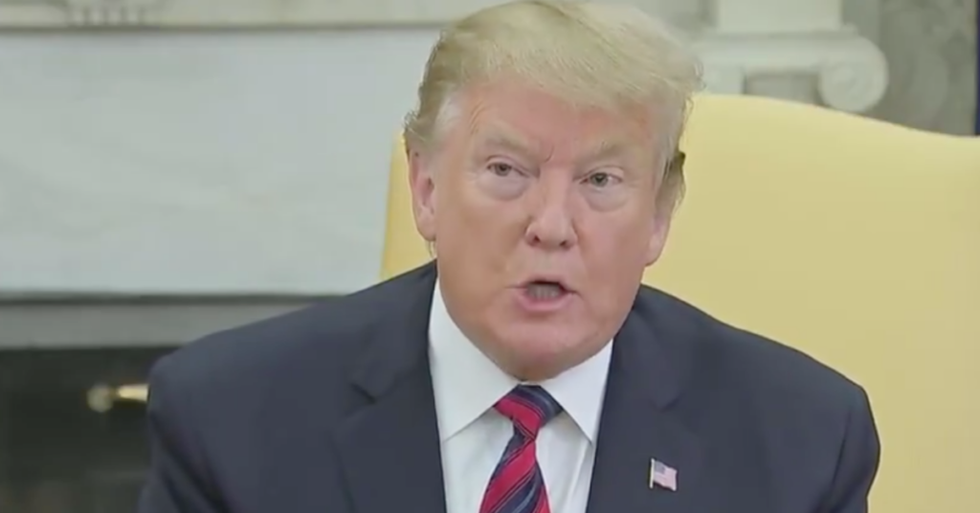 President Donald Trump says he discussed the "Russia hoax" in a phone call with Russian leader Vladimir Putin, but when asked whether he told Putin not to meddle in the next U.S. election after Special Counsel Robert Mueller's report found that “the Russian government interfered in the 2016 presidential election in sweeping and systematic fashion," he only said: "We didn't discuss that."

"We discussed five or six things. We went into great detail on various especially the nuclear––especially, maybe, Venezuela. We talked about North Korea at great length... we also discussed trade. We intend to do a lot of trade with Russia."

The president's statement came as no surprise to those who've been watching him continue to denounce Mueller's investigation and as William Barr, his attorney general, refuses to comply to the House Judiciary Committee's questions about the complete and unredacted report, which has still not been made available to lawmakers.

High profile critics, such as Representative Adam Schiff (D-CA) and Richard Painter, the chief ethics lawyer during the George W. Bush administration, say the president is a threat to national security.

This is crazy Congress doesn’t even have the unredacted Mueller Report, but Trump is briefing the Russians? He need… https://t.co/EEh57M1R7z
— Richard W. Painter (@Richard W. Painter) 1556903902.0

Here's what America knows is true: the Russians bribed Trump during the presidential campaign for his historically… https://t.co/mxCUACCqwc
— Seth Abramson (@Seth Abramson) 1556904276.0

The president also took to Twitter, calling his talk with Putin "productive" and noted that "long before the Witch Hunt started," he's said that "getting along with Russia, China, and everyone is a good thing, not a bad thing."

Had a long and very good conversation with President Putin of Russia. As I have always said, long before the Witch… https://t.co/TAlzmvxATK
— Donald J. Trump (@Donald J. Trump) 1556903191.0

The report notes that Putin’s “preference was for candidate Trump to win,” but the Russians “appeared not to have preexisting contacts” with Trump’s campaign before the election “and struggled to connect with senior officials around the president-elect.” Despite that, Trump did make a point to obstruct the probe on numerous occasions, though these attempts largely failed because many of his associates refused to comply with his directives.

The Atlanticdescribed the Trump-Putin phone call as "Helsinki all over again," a nod to last year's summit between the two leaders in Helsinki, Finland, when Trump sided with Putin over assessments from the United States intelligence community that Russia interfered in the 2016 presidential election.